President Barack Obama said Wednesday that the “entire world is appalled” by the death of American journalist James Foley, who was kidnapped in Syria more than 18 months ago and whose death was depicted in a video Tuesday.

“Today the entire world is appalled by the murder of journalist Jim Foley,” Obama said Wednesday in an emotional statement from Martha’s Vineyard.

Obama said the Middle East must work to “extract this cancer” that threatens the stability of Iraq and the region. “[ISIS] speaks for no religion,” Obama said. “Their victims are overwhelmingly Muslim.”

“No just God would stand for what they did yesterday and what they do every single day,” he added.

Obama called Foley’s family on Wednesday morning to express his condolences on the loss of their son.

“Jim was taken from us in an act of violence that shocked the conscience of the entire world,” Obama said.

The video also includes a threat to kill Steven Sotloff, a freelance journalist who has written for TIME and other outlets, and has been missing since August 2013. “We keep in our prayers those other Americans who are separated from their families,” Obama said. “We will do everything that we can to protect our people and the timeless values that we stand for.”

Obama said the United States would continue its efforts to confront ISIS. “The United States of America will do what we must to protect our people,” he said. “We will be vigilant, and we will be relentless.”

A Facebook page affiliated with the Foley family’s campaign for his release posted a message Tuesday evening from his mother, Diane Foley.

“We have never been prouder of our son Jim,” she wrote. “He gave his life trying to expose the world to the suffering of the Syrian people. …We thank Jim for all the joy he gave us. He was an extraordinary son, brother, journalist and person. Please respect our privacy in the days ahead as we mourn and cherish Jim.”

Foley “was taken by an organized gang after departing from an internet café in Binesh, Syria,” near the Turkish border, the FBI said in an alert following the Nov. 22, 2012, kidnapping. He was in Binesh covering the Syrian civil war for the GlobalPost website and AFP.

Foley, 40, grew up in New Hampshire, where his parents live. 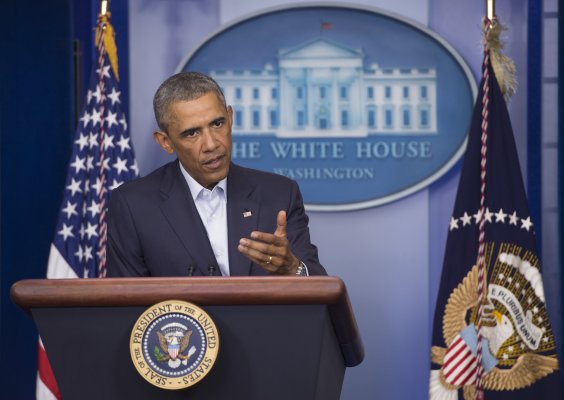 Obama's Mission Creep in Iraq
Next Up: Editor's Pick