Ebola Treatment May Emerge From Drug For Another Virus

With the latest outbreak of Ebola in western African claiming more than 1,200 lives since March, any advances on the treatment front are welcome—even if they come from studies of a related virus.

Thomas Geisbert, professor of microbiology and immunology at the University of Texas Medical Branch at Galveston, is getting more attention than he expected for his work on a promising therapy for a virus called Marburg because of its potential application against Ebola. In the journal Science Translational Medicine, Geisbert, who spent two decades at the U.S. Army Medical Research Institute of Infectious Diseases working on treatments for emerging and lethal pathogens, reports that delivering bits of RNA encased in a protein to monkeys infected with the nastiest Marburg strain can save their lives. While all of the 16 animals treated with the experimental treatment survived, none of the animals who weren’t treated did.

MORE: We’re Getting Closer to Vaccines and Drugs for Ebola

In 2010, he and his colleagues published equally promising results using the same technique against Ebola Zaire, the same strain responsible for the deaths in western Africa. In that study, however, the animals were treated within an hour of being infected with a highly lethal dose. The animals survived, so Geisbert is eager to test whether delaying treatment longer, up to several days after infection, will also protect patients, just as it did with the monkeys in the current study. Having such a window is critical because in reality, people may not even know they have been infected until they experience symptoms like fever or headaches.

“This is the first study showing that we can treat [filovirus infections] when we first start seeing signs of illness,” he says. “I am very confident that the same will hold true with Ebola. We demonstrated in 2010 that the same strategy works against Ebola Zaire and I think we certainly can optimize the strategy to perhaps do even better.” The animals in the study were dosed with a much higher amount of virus than people would generally see, so Geisbert believes that if it’s possible to extend protection against Ebola, it would buy up to a week of time in which people could be successfully treated. What’s making Geisbert so optimistic is the fact that the technique involves blocking the virus’ ability to reproduce, unlike the therapy that two American health workers received, which relies on antibodies that stick to the virus and incapacitate it before it can infect healthy cells.

Tekmira, a Canadian biotech company, has begun early human trials testing the safety of the Ebola version of the therapy. While the Food and Drug Administration requires human trials for all new drugs and vaccines, for so-called exotic viruses like Ebola and Marburg, for which intentionally infecting volunteers wouldn’t be ethical because of their lethality, the agency makes an exception. It accepts tests involving animals that replicate the human course of disease, and a trial of the drug’s safety in uninfected, healthy human volunteers. The FDA had put a hold on the company’s application for approval, pending more confirmation that the product was safe to study in healthy people in escalating doses, but that in August the agency changed that to a partial hold. That makes it possible for any person, or country, that requests the treatment to receive it under emergency conditions.

“There is a lot of pressure to move studies [on Ebola] to the forefront and do them sooner rather than later,” says Geisbert. And now there’s more evidence that doing so could potentially save more lives. 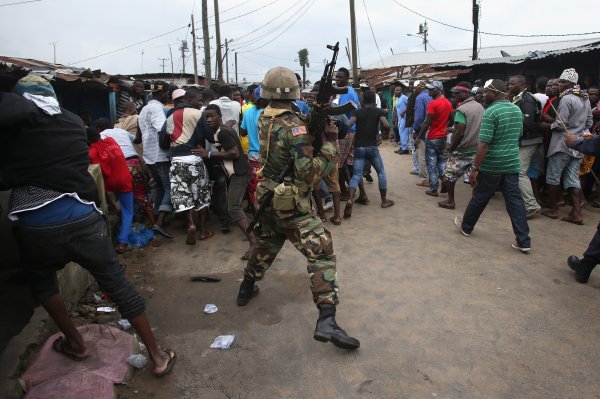 Clashes in Liberia Injure 4
Next Up: Editor's Pick