Tuesday night marked a significant decline in violence between protesters and police in Ferguson, Mo., 10 days after the killing of an unarmed black teenager by a police officer brought nights of unrest to the streets of this St. Louis suburb.

For the first night in a week, police did not employ tear gas, instead using National Guard tactical teams to identify the loudest and most imposing protesters, arresting some 47 people, mostly for failure to disperse. Missouri Highway Patrol Captain Ron Johnson told reporters at an early morning conference that it was a sea change from the looting and unrest of previous nights.

“I believe there was a turning point made tonight,” he said, speaking the day Attorney General Eric Holder was due to arrive in Ferguson to meet with investigators looking into the shooting death of Michael Brown by a police officer on Aug. 9. A grand jury probe of Brown’s death was also expected to be convened on Wednesday morning.

Johnson praised the efforts of local clergy and civilians to diffuse the tension on the contested strip of West Florissant Ave. Peacefully-protesting organizers, including members of the clergy, held a large prayer circle at 12:35 a.m., then sought to send the crowd home rather than see them clash with police.

In the minutes following that prayer, elder protesters approached the teens and 20-somethings on the fringes and pleaded with them to go home. Most, if not all, declined. In an exchange witnessed by this reporter, linebacker-sized community activist Paul Muhammad, wearing fatigues and a black t-shirt reading “Peacekeepers,” approached a teenage boy wearing a red bandana over his face. “If you’re going to be out here all night, then I’ll be out here all night. Let’s just go home,” he said. When the teen demurred, Muhammad asked him to show his face. “You don’t need the mask,” he said. The teenager replied: “I don’t got no face.”

It was from this cluster of fringe onlookers, who had declined to participate in marches up and down W. Florissant for much of the evening, that a single water bottle was hurled at police. The bottle missed its mark, yet set in motion a police advance south on W. Florissant, with glass and urine being hurled at police and officers responding by pepper-spraying several protesters. One such agitator, said Missouri Highway Patrol Capt. Ron Johnson, was an out-of-state violator from Austin, Texas.

Johnson was visibly weary yet in a celebratory mood after a day that saw several store owners re-open their doors on W. Florissant, and an easing of nighttime violence. He told reporters at a 2:30 a.m. news conference that he and other officers had encountered a local woman grilling out on her front lawn. She offered officers “hot dogs and ice-cold water,” he said, “and what a good hot dog it was. That is the true spirit of Ferguson.”

Demonstrators in Ferguson have decried what they describe as an influx of out-of-towners who have been involved in violence and looting. In the previous day’s clash with police, 21st ward alderman Antonio French claimed to have identified a man from Chicago in a picture who was launching projectiles at police.

Peaceful protesters on Tuesday night took heed of the reports of French and others, carefully monitoring protesters who seemed non-native to St. Louis County. At one point, two masked men hurled to the ground a fair-skinned man who seemed to reach for a brick as police advanced toward the group of protesters. The man recovered and ran south and out of sight as his attackers screamed “Where you from?”

Missouri Attorney-General Chris Koster earlier in the day delivered to protesters the news of the grand jury investigation. That news, repeated over and over again on a loudspeaker by a protester following the impromptu prayer, didn’t seem to resonate with those who had earlier chanted the anti-police invective “F–k 12.”

For them, these protests have become about something else.

—With reporting by P. Nash Jenkins 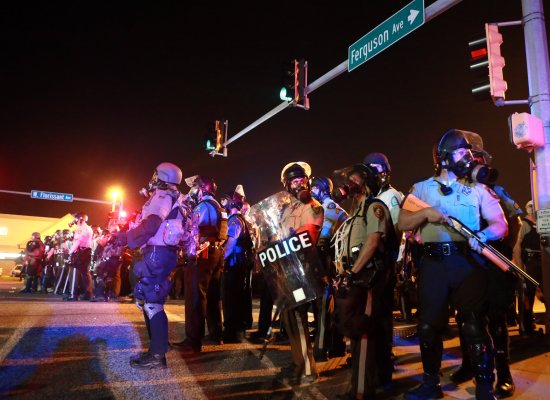 Nobody Is Winning in Ferguson
Next Up: Editor's Pick