This 1 Mistake Could Cost You Hundreds of Dollars

Everybody hates bank fees, but what’s even more worse is not knowing when or why you’re getting dinged with those charges.

In a new study, the website WalletHub.com finds the average checking account has 30 different fees that can ding you, and banks aren’t always transparent about the details. “Some banks disclose their fees only after a customer has opened an account,” the site warns. “Others disclose their fees in inconspicuous sections of their websites.”

In particular, those $35 overdraft fees that can be triggered by buying something as small as a cup of coffee can really pack a wallop, yet many of us don’t bother paying attention to the fine print that spells out the details of how financial institutions process transactions. We should, though — a new interactive tool from the Pew Charitable Trusts shows how seemingly insignificant differences in transaction-processing practices can make the difference between having enough money in your account to tide you over until your next payday or getting socked with more than $100 in fees.

Pew looks at three different variables: Letting people overdraw their balances when they make purchases or ATM withdrawals versus declining these attempts, processing transactions in the order they happen versus in order of highest-to-lowest dollar amount and offering a $5 “grace period” threshold before an overdraft fee kicks in versus no threshold.

In a trio of scenarios, Pew follows three hypothetical customers in a scenario many Americans are all too familiar with: navigating the demands of daily expenses with less than $200 until the next paycheck comes. In each case, everything is identical for the variable under scrutiny.

The differences are huge. For instance, a customer whose bank processes transactions in the order they happen winds up getting hit with a single $35 fee — while her alter ego who banks with an institution that practices high-to-low transaction ordering gets nailed for FOUR $35 fees when conducting the exact same transactions.

The other two examples show a similar disparity. For many of us, the difference between ending the month 10 bucks in the black versus more than $80 in the red is huge, especially if our spending habits are such that this happens frequently.

Consumer advocates criticize banks for their overdraft practices, pointing out that the customers who pay the bulk of these charges tend to be younger, minority customers who are poorer to begin with and often don’t have the financial education to know a raw deal when they see one. Fewer than 10 percent of bank customers are responsible for three-quarters of overdraft charges, according to the Consumer Financial Protection Bureau. “[This] is especially pertinent as the CFPB continues to study overdraft and will release new rules based on these studies in 2015,” Pew says.

The CFPB says it’s still looking at how these fees impact bank customers. “We need to determine whether current overdraft practices are causing the kind of consumer harm that the federal consumer protection laws are designed to prevent,” CFPB director Richard Cordray said in a statement last month, saying the agency’s most recent research “compound[s] our concerns” about whether overdraft practices leave vulnerable customers at risk.

Until the CFPB acts, it’s buyer-beware out there, so don’t forget to read the fine print. 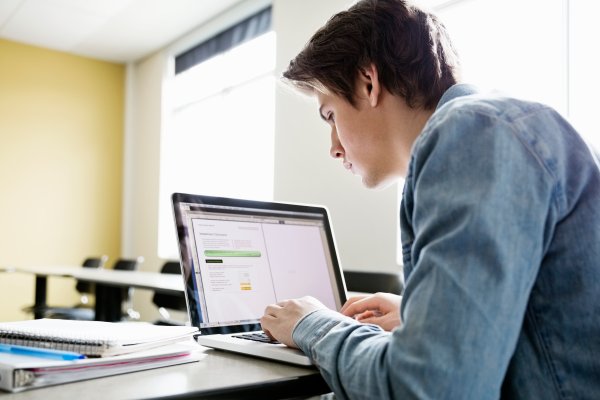 One (More) Shocking Way Colleges Are Ripping Off Kids
Next Up: Editor's Pick