American forces launched a second round of airstrikes against Islamic militants near Iraq’s Mosul Dam Tuesday as Iraqi government forces looked to expand their zone of control around the critical infrastructure.

“There’s still operations to expand that control in and around the dam,” Pentagon spokesperson James Gregory told TIME. “Those operations are ongoing.”

Two airstrikes have been conducted in the last 24 hours, one of which successfully destroyed an Islamic State of Iraq and Syria (ISIS) checkpoint, according to a statement from U.S. Central Command (CENTCOM). The other airstrike was unsuccessful, CENTCOM said.

U.S. airstrikes helped Kurdish and Iraqi forces recapture control of the Mosul Dam from ISIS forces Monday. The dam is of strategic significance, and thousands of civilian lives, including the U.S. Embassy in Baghdad, would be put at risk if it were breached, President Barack Obama said Monday.

ISIS forces have been making their way across Iraq after spilling over from Syria, wrestling control of several parts of the country away from the Iraqi government. The U.S. military first engaged with ISIS earlier this month as part of an effort to help thousands of Iraqi civilians who fled to a mountain range while seeking refuge from the advancing militants. 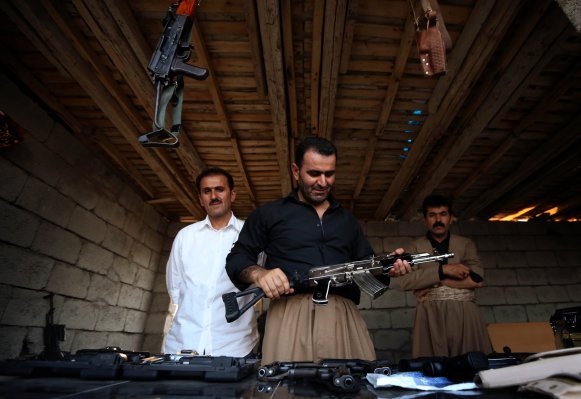 Iraq Fighting Is Driving Weapons Prices Through the Roof
Next Up: Editor's Pick