Hollywood Stars Say Thanks But No Thanks to Russia

On Aug. 14, the actor Steven Seagal arrived at Russia’s premier weapons expo and, in the company of several arms dealers, strolled to a display of automatic rifles. A crowd of reporters and onlookers gathered around to watch as he handled one of the weapons, some even climbing on top of a military vehicle in order to get a better look. Standing next to Seagal, Deputy Prime Minister Dmitri Rogozin then offered his thanks to the American guest and, given the state of affairs between their countries, acknowledged the costs of Seagal’s apparently undiminished affection for Russia. “A lot of people criticize him at home,” Rogozin told the crowd. “It is not an easy time for him right now.”

The words of sympathy were not misplaced. It is a challenging time for Western celebrities who have made a habit of visiting Russia, either for pleasure or profit. Since President Vladimir Putin annexed the Ukrainian region of Crimea in March, the United States and the European Union have imposed sanctions on members of the Russian elite, including Rogozin, who oversees Russia’s military-industrial complex—and anyone who does business with the targeted officials risks being sanctioned as well. But for Western celebrities the more immediate danger of a visit to Russia is the damage it could do to a star’s career, says Samuel Aroutiounian, the leading go-between for Russians seeking to hire Hollywood stars to attend events in Russia.

In the decade he has spent in this business, working as a celebrity talent broker for a New York City-based agency called Platinum Rye, Aroutiounian says it’s never been more difficult to line up appearances in Russia, not even basic endorsement deals with Russian companies. The offer of bigger paychecks—which usually range from five to seven figures, depending on the caliber of the star and the outrageousness of the event—has not done much to change their minds. “These people are already super rich,” he says of the celebrities. “So they’re much more concerned about not killing their careers.” And in the current political climate, he says, “They don’t know what will happen to them when they come back home, you know? They will take a lot of heat.”

Even a year ago this was not an issue. The growth in the Russian market for Hollywood movies, as well as what had been gradual improvements in the country’s image in the West, had helped persuade some of the biggest names in Hollywood, like Robert De Niro and Jeremy Irons, to make appearances in Russia in the last few years. The local advertising market proved enticing enough in 2010 for Bruce Willis to do a series of ads for a Russian lender called Trust Bank. (In his TV commercials, Willis is shown getting ready to jump out of a speeding van during a car chase when his cell phone rings. “Hello,” he says, “this is Trust Bank, how can I help you?”)

Later that year, a Russian charity asked Aroutiounian to bring as many stars as possible to its gala in St. Petersburg, failing to mention that Putin would use it as a chance to make his musical debut. “I just brought whoever was available,” the broker recalls. “It was winter in St. Petersburg, so for some people it was too cold. Other people had family time, because it was around Christmas.” When Putin got on the stage to sing, wearing a black suit with an open collar, a whole stable of Hollywood celebrities stood up to applaud his rendition of “Blueberry Hill”, including Kevin Costner, Goldie Hawn, Kurt Russell, Vincent Cassel and Monica Belucci. “It was one of those moments,” Aroutiounian says, “when even I was, like, ‘Wow, is this really happening?’” (In the clip of Putin’s performance, which has been viewed nearly four million times on YouTube, Aroutiounian stands next to a cheerfully applauding Sharon Stone.)

Like Putin’s many other Hollywood-flavored appearances—including the times he went to watch martial arts with Jean-Claude Van Damme—the “Blueberry Hill” stunt did not merely serve to indulge his vanity. It also helped demonstrate to his electorate and to his foreign detractors that Russia was not a pariah state. It showed that its leader, for all his public posturing with weapons and heavy machinery, wanted to be liked, and without the applause and the acceptance of the international beau monde, his charisma would come up a little short.

Until the events of this year, many American stars saw little problem with their role in this equation, says Howard Bragman, a long-time Hollywood publicist. “Most of the young stars today have no idea what the Cold War is or was, unless they did a movie about it,” he says. “Russia just doesn’t leave the same taste in their mouths that it does for people who are older.” The only downside, he says, is when stars get mixed up in politics that their handlers failed to warn them about, as in the infamous case of Hillary Swank.

In 2011, the two-time Oscar-winning actress went to the Russian region of Chechnya, where she had been hired to celebrate the birthday of its Kremlin-appointed ruler, Ramzan Kadyrov. The resulting outcry from human rights organizations, which have criticized Kadyrov’s record, prompted Swank to apologize for having graced the occasion with her presence. “Shame on me,” she said on The Tonight Show with Jay Leno, promising to give her six-figure paycheck for the engagement to charity. “The bottom line is that I should know where I’m going, and do better research.”

Aroutiounian, speaking by phone from Los Angeles, says the pitfalls of the Swank affair now apply not only to Chechnya but to the rest of Russia as well. “Everybody knows what happened when Hillary Swank went to Russia,” he says. “Since Russia is basically in a war right now, everybody is laying low.”

Well, not everybody. There are some American actors who still visit Russia. Mickey Rourke, who came to Red Square on Aug. 11 to buy a T-shirt imprinted with Putin’s face, called the Russian President a “real gentleman,” but added that his primary interest in the motherland was his Russian girlfriend. Seagal took things a bit further. Before touring the arms market on Aug. 14, he became the first American celebrity to visit Crimea since its annexation, giving a performance with his blues band in the city of Sevastopol. Hugging it out afterward with the leader of the Russian biker gang who organized the concert, Seagal declared, “I am Russian,” referring to his Russian ancestry. The crowd went wild, though the statement was nothing new for Seagal. He has long expressed his admiration for Russia and praised what he calls its “wonderful” leadership, and the crisis in Ukraine has apparently done nothing to change his mind.

It has, however, obliged him to take more criticism than usual for his visits to Russia, and it seems to be getting him down. In a statement published on his website on Aug. 13, he said he was “once again deeply saddened” by the Western coverage of his concert in Crimea. “Sadly,” he wrote, “we live in a world where any form of innocence can be twisted for sensational headlines and maybe dark political motives.” Seeing that need to defend his innocence after another appearance in Russia, other stars could be forgiven for simply choosing to stay away. 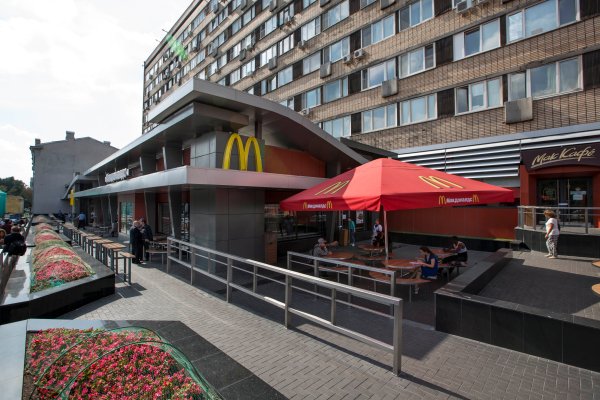 Russia Is Cracking Down on McDonald's
Next Up: Editor's Pick