Israel-Gaza Talks Collapse as Fighting Resumes Where It Left Off

Destruction is seen from the bathroom of a Palestinian apartment in the northern Gaza Strip city of Beit Hanun, on August 18, 2014.
Thomas Coex—AFP/Getty Images
By Ilene Prusher / Jerusalem

Hostilities between Israel and Palestinian militants in Gaza resumed and peace negotiations in Cairo were called off Tuesday, with Israeli negotiators called home to Jerusalem hours before an already prolonged cease-fire was due to expire.

Militants in Gaza launched three rockets in the direction of the Israeli city of Beersheba at close to 4 p.m. local time on Tuesday afternoon, Israel Defense Forces reported. They fell in open areas and no one was injured. But the very fact of even a trio of rockets being launched tested the doctrine that Prime Minister Benjamin Netanyahu and other Israeli officials had reiterated in recent days: that Israel would not negotiate under fire, and would not accept even a “drizzle” of rocket fire from Hamas and its allies in Gaza.

“If Hamas thinks that through the continued drizzle of rocket fire it will force us to make concessions, it’s mistaken,” Netanyahu warned on Sunday. The metaphor of this drizzle – or tif-toof as it’s referred to in Hebrew – has become the new catch-phrase being used in Israel to embody a zero-tolerance policy to rockets. Tens of thousands of Israelis, including residents of the southern parts of Israel who have often been subjected to rocket fire even when there isn’t a full-scale conflict going on, protested in Tel Aviv last Thursday night, demanding a more definitive solution to the problem.

Netanyahu’s right-wing Minister of Economy, Naftali Bennett, said after the renewed fire Tuesday that it was impossible to negotiate with Hamas. “When you hold negotiations with a terror organization, you get more terror,” he said. “Hamas thinks that firing rockets helps in securing achievement in negotiations, therefore it is firing at Israel even during a cease-fire. Rockets are not a mistake [for Hamas], they are a method.”

A Hamas spokesman in Gaza, Sami Abu Zuhri, accused Israel of dragging out the talks and of not being serious about reaching an agreement. “Israel’s foot-dragging proves it has no will to reach a truce deal,” Abu Zuhri said. “The Palestinian factions are ready to all possibilities,” he added, presaging the likelihood of a return to further conflict.

He also said that he had “no information about rocket fire coming from Gaza,” making it unclear as to which group actually launched the rockets. There are smaller militant groups than Hamas operating in Gaza; the largest of them, Islamic Jihad, has a delegation attending the talks in Cairo.

The return to hostilities is hardly the outcome everyone was waiting for as negotiators neared the end of their deadline for reaching a deal to bring a brutal and bloody summer of fighting to an end. Only a day earlier, the Israeli and Palestinian delegations meeting in Cairo were reported to be very close to reaching an agreement, as the nearly week-long ceasefire was extended for another 24 hours.

However, there were still large gaps on key issues. Hamas has demanded a complete lifting of the closure on the Gaza Strip, as well as permission to build an international seaport in Gaza. Israel has said it will not allow Hamas to use looser restrictions to rearm or to rebuild tunnels into Israel.

After the three initial rockets, further rocket salvoes on southern Israel were reported Tuesday afternoon. Lt. Col. Peter Lerner, an IDF Spokesperson said that the IDF “will continue striking terror infrastructure, pursuing terrorists, and eliminating terror capabilities in the Gaza Strip, in order to restore security for the State of Israel.” 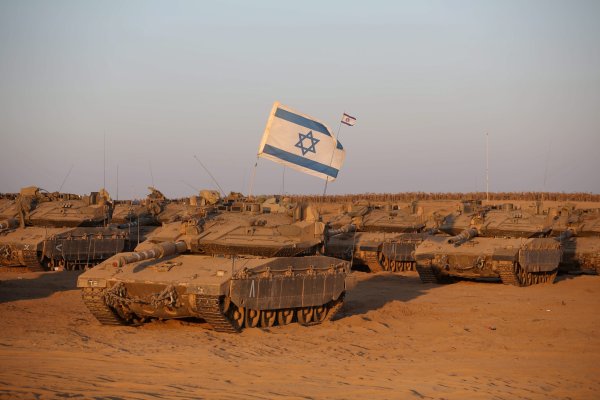 Most Israeli Jews Say Gaza Offensive Was Justified
Next Up: Editor's Pick