People at the main entrance to Campus Virchow Hospital where a woman suspected of being infected by the Ebola virus is being treated in Berlin, Germany, 19 August 2014.
Paul Zinken—EPA
By Alexandra Sifferlin

A female patient in Berlin is currently awaiting tests to determine whether she has Ebola, but spokespeople from the Charité hospital where she is being treated say it is unlikely she has the virus.

“The patient suspected of having Ebola has arrived at the Charité. The Charité experts do not assume at this time that they are dealing with a case of Ebola. The patient has not stayed in one of the affected regions. The physicians are leaning more toward an infectious gastrointestinal disease. Of course, in order to formally rule out Ebola, a blood analysis will be carried out,” Manuela Zingl, a spokeswoman for the Berlin Charité hospital where the patient is being treated, said in a statement sent to TIME.

The woman had recently returned from West Africa when she collapsed at her workplace. About 60 police, medics and firefighters were sent to the office, which was put under a lockdown, the Wall Street Journal wrote. A reported 600 people were involved in the quarantine.

U.S. Response to Wuhan Coronavirus Grows, But No Emergency Declaration Yet

If any hospital in Germany is prepared to take in a patient with Ebola or suspected Ebola, it’s the Charité hospital. The hospital recently underwent drills—which you can see in TIME’s coverage—in order to prepare for the possibility, though Dr. Florian Steiner, an infectious disease physician at Charité hospital told TIME he thought the likelihood they would get a patient was slim. In the photos, the physicians wear intensive full body suits, which Dr. Steiner acknowledges is conservative, given that Ebola is not an airborne illness and not easily transmitted. You can read more about their prep here, and see the photos below.

See How Berlin is Prepping For Ebola Patients 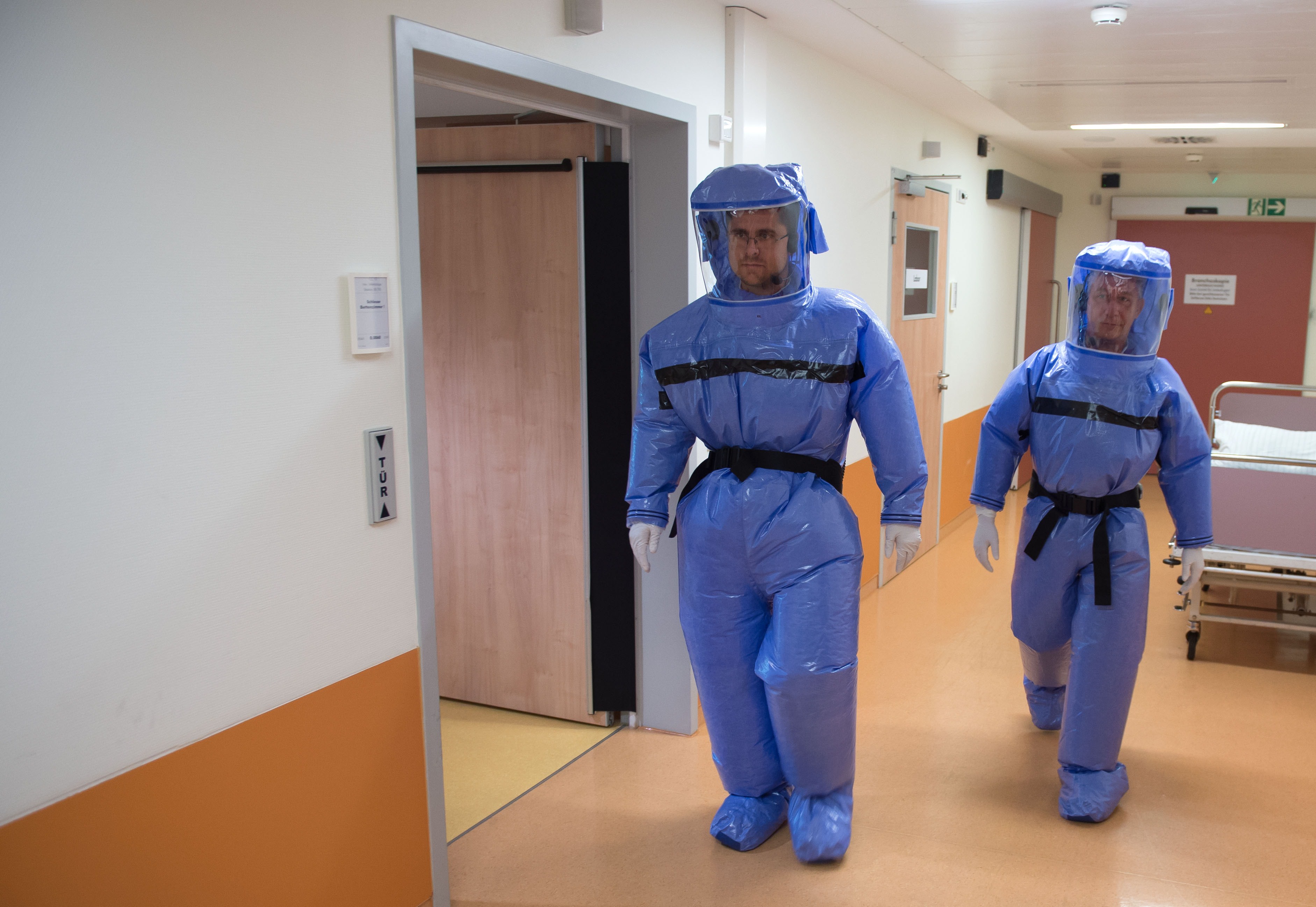 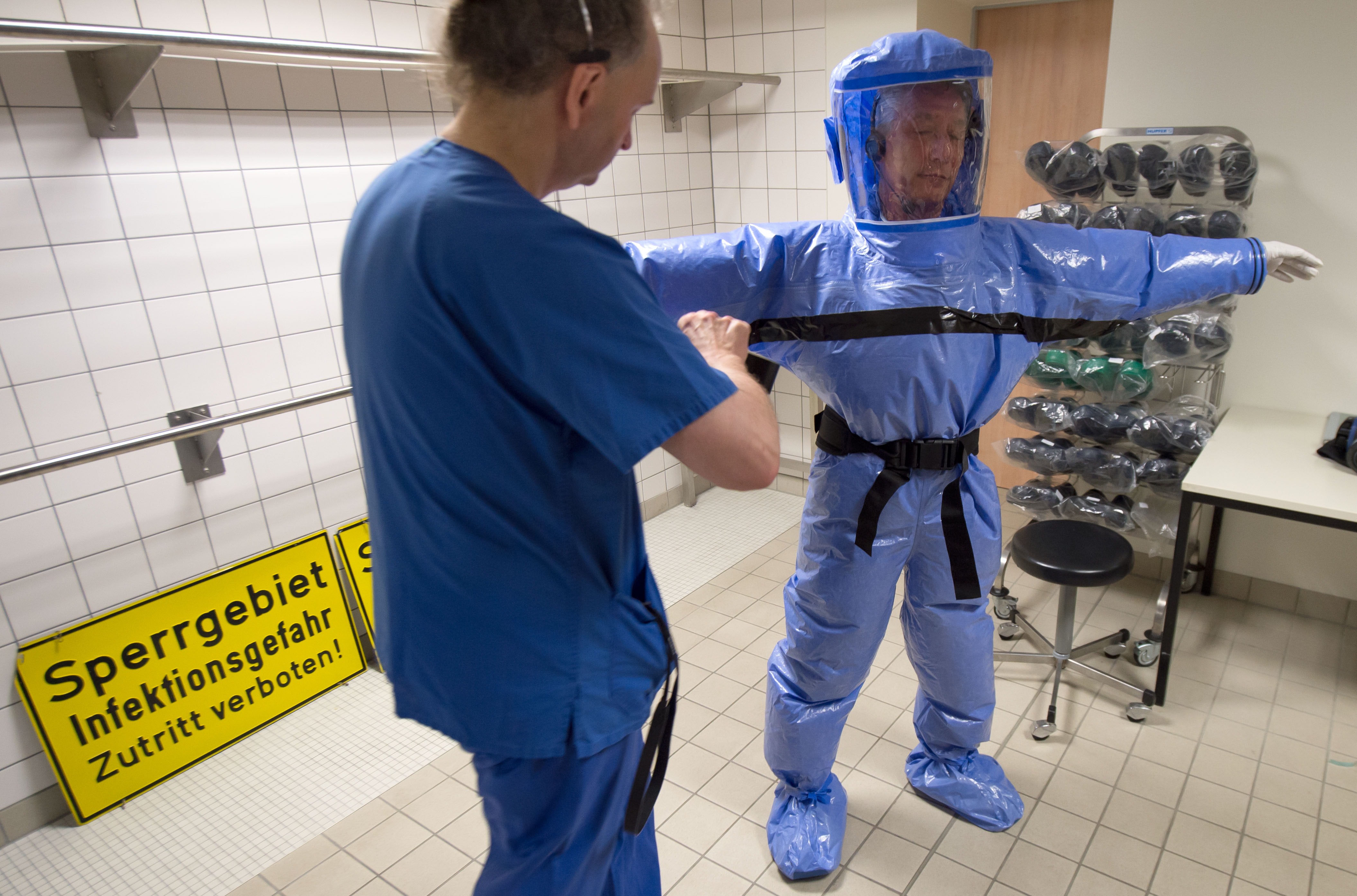 Thomas Grosse helps quarantine office leader Thomas Klotzkowski to put on protective clothing during a demonstration of the proceedings at the quarantine office of Berlin's Charite hospital on August 11, 2014.
Tim Brakemeier—AFP/Getty Images 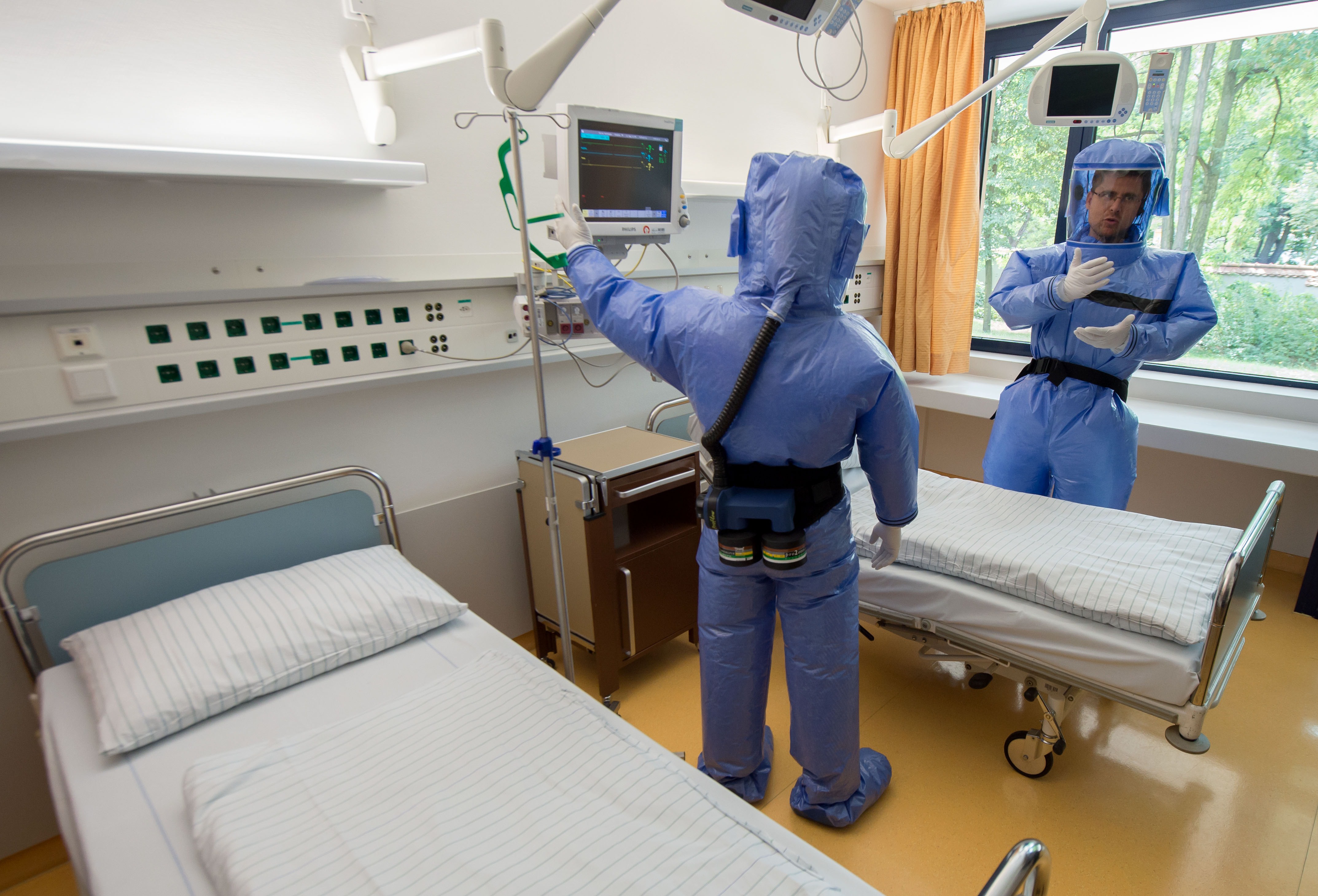 Infectious disease specialist Florian Steiner and quarantine office leader Thomas Klotzkowski wear protective clothing as they stand in a sick room during a demonstration of the proceedings at the ward of Berlin's Charite hospital on August 11, 2014.
Tim Brakemeier—AFP/Getty Images 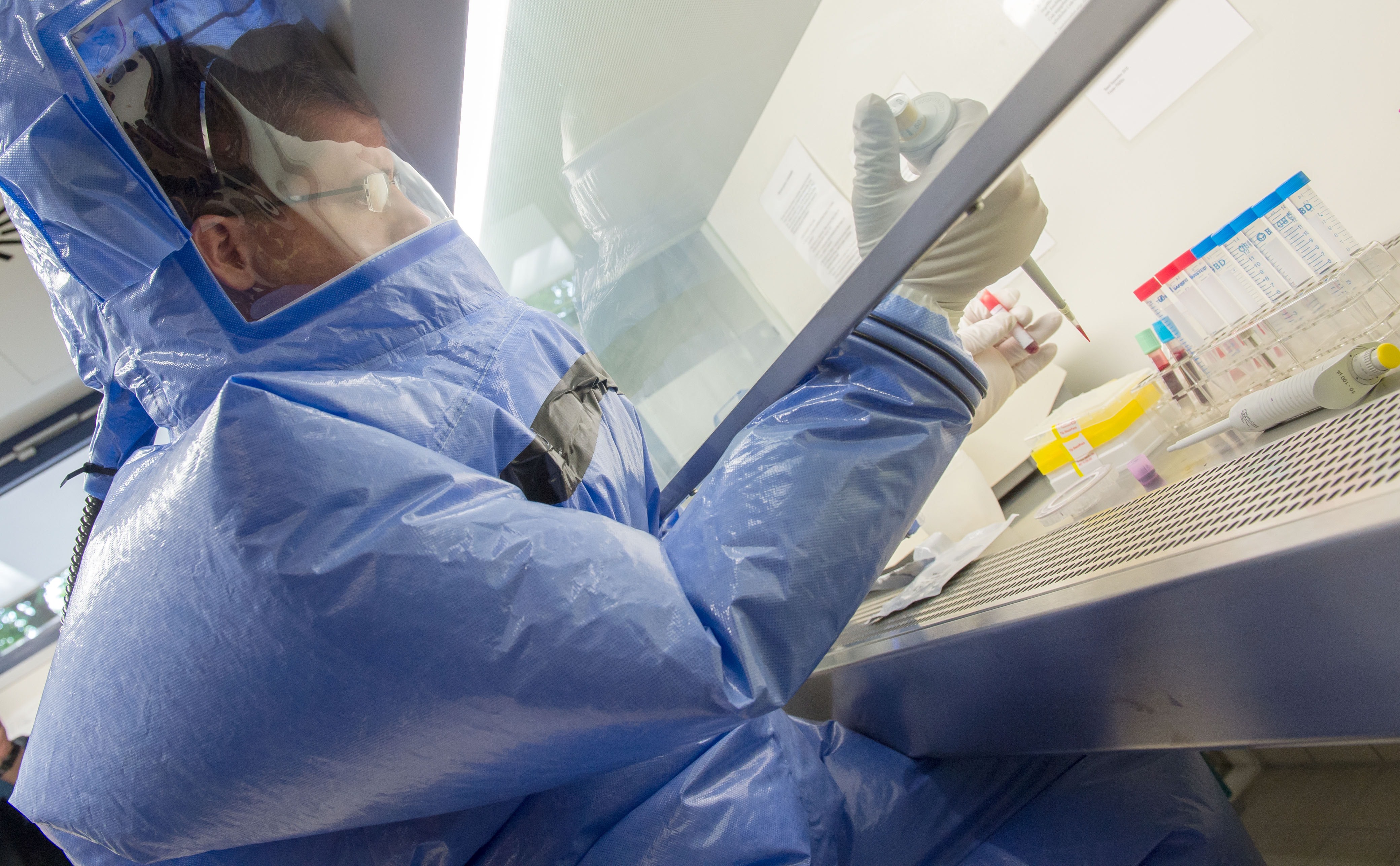 Infectious disease specialist Florian Steiner wears protective clothing as he works in a laboratory for blood tests during a demonstration of the proceedings at the quarantine office of Berlin's Charite hospital on August 11, 2014.
Tim Brakemeier—AFP/Getty Images 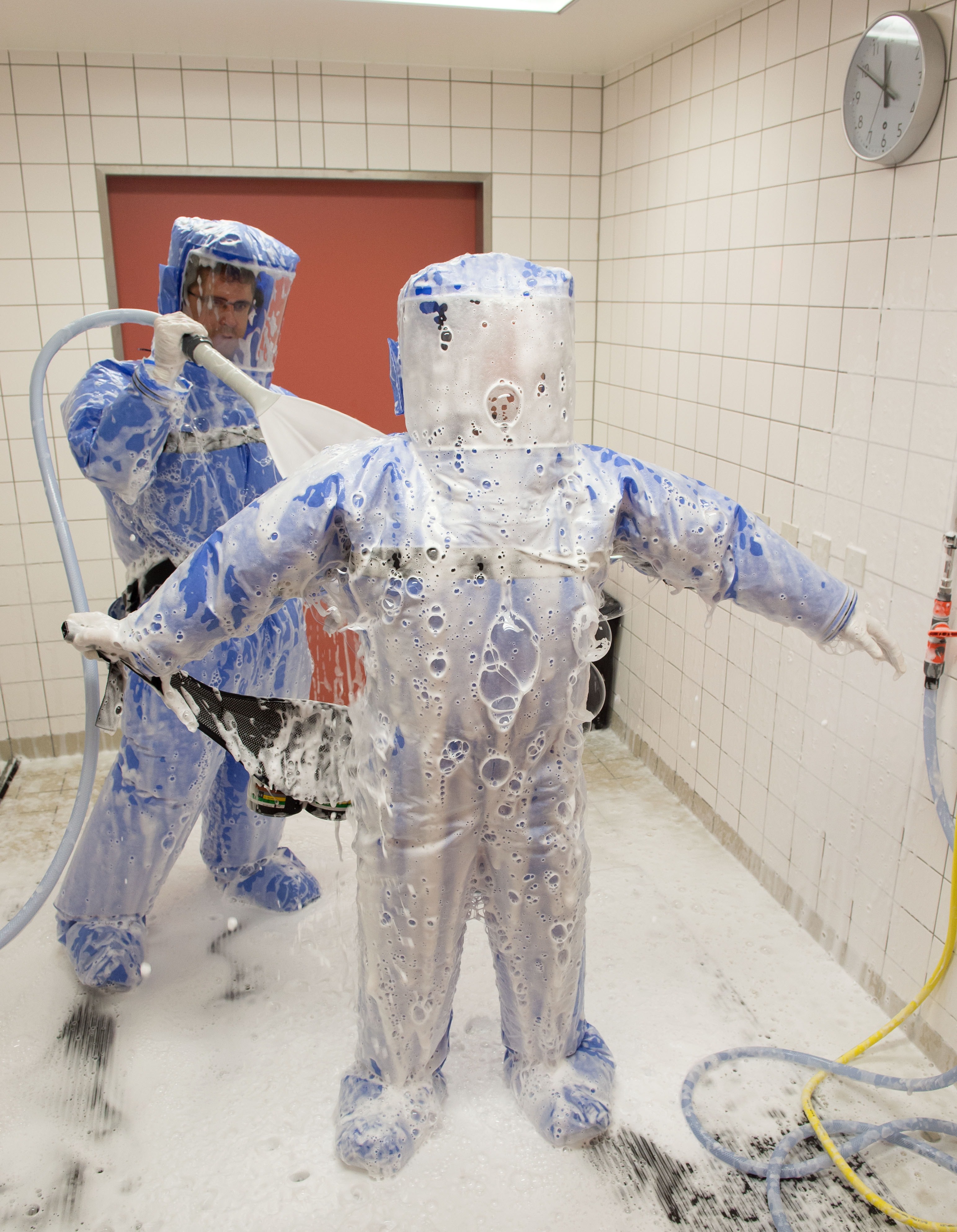 Infectious disease specialist Florian Steiner and quarantine office leader Thomas Klotzkowski disinfect themselves during a demonstration of the proceedings at the ward of Berlin's Charite hospital on August 11, 2014.
Tim Brakemeier—AFP/Getty Images 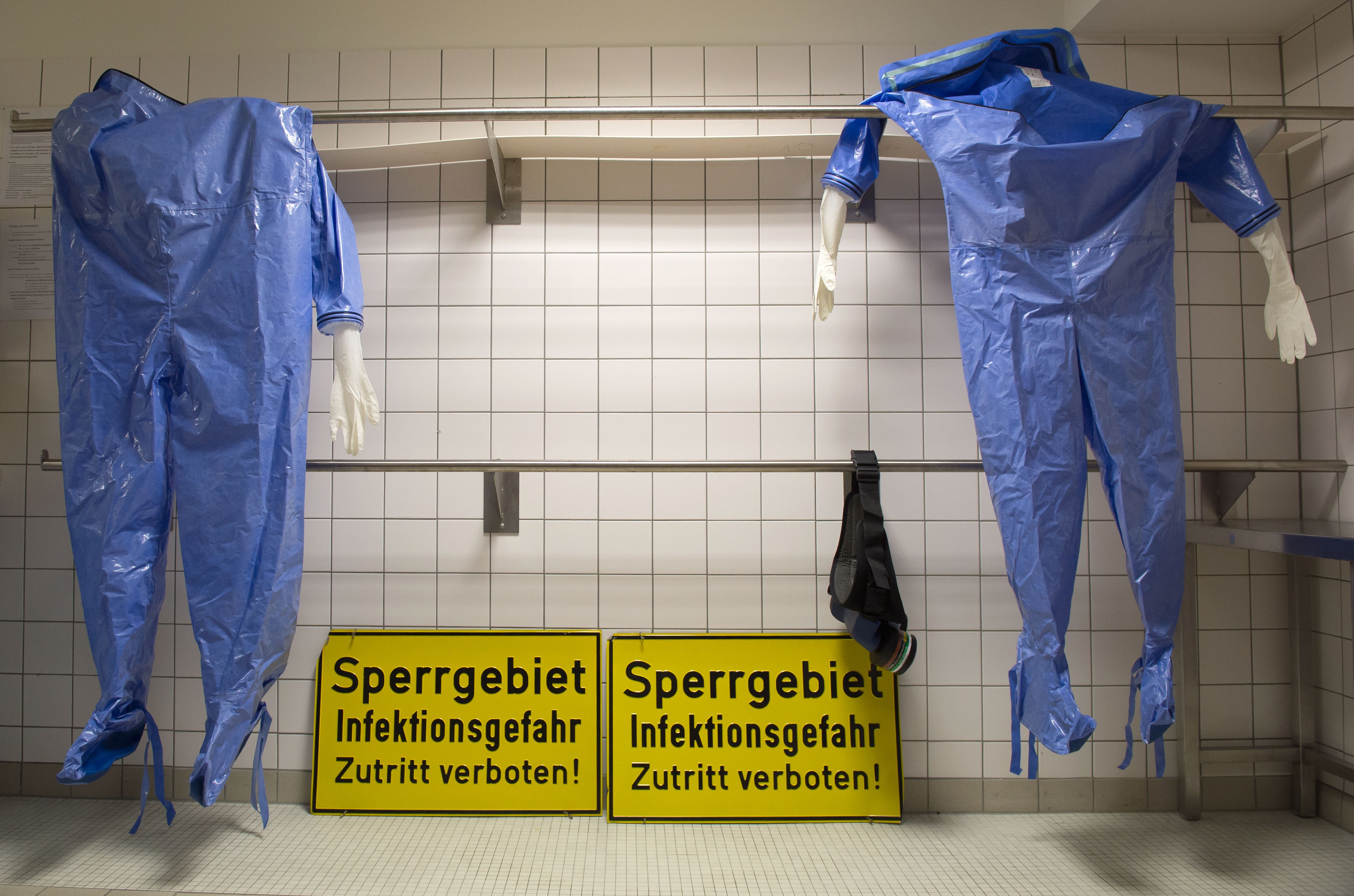 Protective clothing hangs in a changing room of the quarantine office of Berlin's Charite hospital on August 11, 2014.
Tim Brakemeier—AFP/Getty Images
1 of 6
Advertisement