She was born before the invention of the stop sign, but sex therapist Shirley Zussman has some thoughts on ‘hooking up.’ “I don’t think it’s as frantic as casual sex was in the sixties,” she says, noting that modern ‘hooking up’ isn’t as exciting without the context of a sexual revolution. Besides, she adds: “In the long run, sexual pleasure is just one part of what men and women want from each other.”

She’s one of the oldest sex therapists in the world, but that might be the least extraordinary thing about her life and career. Born at the beginning of World War I, she graduated from Smith college in 1934, in the same class as Julia Child. Zussman was mentored through her graduate dissertation by Margaret Mead, and in the 1960s learned about sex therapy from Masters and Johnson, the inspiration for the Showtime series Masters of Sex. Her husband, a gynecologist, performed one of the first legal abortions in New York.

Here’s what she has to say about casual sex, cell phones, and how our hectic work lives are changing our attitudes toward sex.

On how being busy hurts your sex life:

“The use of time is very different in our society today. People are busy all the time. That was not true when I was growing up. At this stage of our development, we want to cover everything, we want to know everything, we want to do everything, and there’s also [our personal] economy which requires an immense amount of time and effort…There is a limit to how much energy and desire and time you can give to one person when there is all this pressure make more money, to be the CEO, to buy a summer house, people want more and more and more. Desire requires a certain amount of energy.

It’s a consequence of being exhausted…The most common problem I see is a lack of desire, a lack of interest. I had a patient say to me, ‘ I love my husband, I love making love to him, but I come home from work, I’ve been with people all day, I just want to crash.’”

On an increased openness about sex:

“I don’t think that the stigma around sex therapy exists like it was in the early years. People were ashamed they had to go to a psychiatrist or a social worker, because it means they needed help. Many people resist the idea that somebody needs to tell them how to have sex.”

“There were changes in the culture, too, there was the sexual revolution. There was the development of the pill, women were freer to let not worry so much about getting pregnant, there was every magazine and TV program talking about sex, there was every advertisement using sex to sell their product. There was an overwhelming immersion in the whole idea of getting more pleasure out of sex. It was not just about having babies.”

On what she learned from Masters and Johnson:

“They were recognizing that it was not all just glamorous and wonderful to be sexual, but that one almost had to learn to be a good partner…Their way of communicating was one of their greatest contributions, and that was not to talk so much about it, but to start with touching and caressing and stroking and kissing, and not rush for that golden bell in the middle of the carousel. It doesn’t start with the man having an erection and then you have intercourse, 1,2,3.”

And what she thinks of the TV show:

“I went to the preview party and met some of the actors in it. I was introduced to Michael Sheen, and he knew that I had known Masters and Johnson, so he said ‘tell me, how do you think I’m representing him?’ I said, ‘I think youre doing a pretty good job, but there’s a major difference.’ He said, ‘whats that?’ I said, ‘you’re handsome.’”

On her weirdest experience in 50 years of sex therapy:

“Someone called me and said he needed some help. He said ‘I’m a bad boy and I’m looking for someone for spankings.’ I had to make it clear that that’s not within my range of expertise.”

On the difference between casual sex in the 60s and ‘hooking up’ today:

“I think there’s a big change in the way we view casual sex. In the 60s it wasn’t just casual—it was frantic. It was something you expected to happen to you, you wanted it to happen, it was sort of a mad pursuit of sexual pleasure. But I think over time the disadvantages of that kind of behavior began to become apparent. There was the emotional crash– the intimacy was not there in the way that people need and want. There was a concern about sexual diseases, and then eventually AIDS made a major impact on calming that excitement.”

I think what was expected of casual sex – frantic sex– was something that didn’t deliver. Because in the long run, sexual pleasure is just one part of what men and women want from each other. They want intimacy, they want closeness, they want understanding, they want fun, and they want someone who really cares about them beyond just going to bed with them.”

I think hooking up includes some aspect of the kind of sex we were just talking about, but in a very much modified, and limited way. It’s not as frantic.”

On the popularity of oral sex:

“We’ve been brainwashed to think that we all become couch potatoes when we’re old. You have to have expectations of yourself! You can make friends in many different ways, but you have to make the effort. You can’t say ‘oh , all my friends died,’ or ‘they’re sick,’ or ‘they don’t want to do what I want to do.’ You have to make an effort to find those new people. They don’t just come running to your door the way they might have when you were growing up.”

On the evils of cell phones:

Read next: Before 50 Shades: Photographs of the S&M Underground 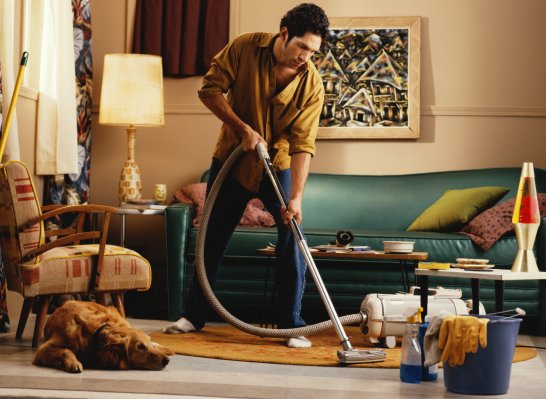 Don’t Be Afraid of Housework, Guys. It Won’t Lead to Less Sex
Next Up: Editor's Pick