Philadelphia's Mo'ne Davis drives in a run with a single to right field off Pearland pitcher Clayton Broeder during the first inning of a baseball game at the Little League World Series tournament in South Williamsport, Pa., Sunday, Aug. 17, 2014.
Gene J. Puskar—AP
By Sean Gregory

Be sure to watch Sports Illustrated cover girl Mo’ne Davis, the 13-year-old pitching sensation from Philadelphia who on Friday became the first girl to throw a shutout at the Little League World Series, while you can. Because if her baseball career follows that of most girls who love the sport, it will be over by high school.

For young girls playing sports like basketball, soccer, and lacrosse, there’s a traditional path to high school success: girls’ teams. In these sports, and others, athletes can even earn a college scholarship. But baseball, America’s pastime, is a strange exception. The National Federation of State High School Associations (NFHS) is not aware of a single school-sponsored girls’ baseball team anywhere in the United States.

Sure, girls can play softball in high school and college. But while softball does have bats and bases and other similarities to baseball — consider it baseball’s close cousin — it’s a still a fundamentally different game.

“We’re fighting a culture that’s decided that softball is an equivalent sport to baseball,” says Justine Sigeal, founder of Baseball For All, a non-profit that provides opportunities for girls and women to play the sport. “If softball and baseball were equivalent, imagine changing [Major League Baseball] to softball. It’s a ridiculous idea.”

Siegal says there are 100,000 girls playing youth baseball. But according the most recent participation survey from the NHFS, only 1,259 girls played high school baseball during the 2012-2013 academic year — and all of them were competing against boys. “We know that 99,000 girls didn’t just lose their passion for playing baseball,” says Siegal. “Girls are not encouraged to play baseball. And if you tell a girl she’s not encouraged to play baseball, what else won’t she be encouraged to do?”

Just 0.27% of high school baseball players are girls, per NHFS data. Some of them do succeed against boys, and if an exceptional talent like Davis — who is slated to pitch on Wednesday night, in the U.S. semifinal — does decide to stick with the sport in high school, she certainly could keep thriving. But she’d be the exception. “So many girls are bullied off of teams,” says Siegal. “Sometimes it’s the players, but mostly it’s coaches and other parents doing the damage. Usually it’s the adults.”

Sarah Hudek, who just finished her junior year pitching for the varsity at George Ranch High School in Richmond, Texas, near Houston, get more stares than anything. “But I’m used to them now,” she says. “It used to bother me more when I was younger.” When she’s warming up at games, she can still see an occasional opponent laughing. “That just puts me in a good mindset,” says Hudek. “Get on the field with me, and see what you think after.”

On August 15, the lefty Hudek, whose best pitch is a change-up, announced a verbal commitment to play baseball at Bossier Parish Community College in Louisiana. “I love watching the kids go back to the dugout after she gets them out, and seeing the ribbing they get,” says Greg Kobza, Hudek’s high school coach. “It gets in their head, and really gives us an advantage.”

Throughout their careers, female baseball players are asked when they are switching to softball. “The question is more obnoxious than it is hostile,” says Dean Dinnebeil, whose daughter, Sara Tobias, is entering Berkeley Carroll High School, in New York City, this fall. She plans to join the baseball team there. Though many girls enjoy softball, others just prefer baseball’s longer bases, bigger fields, and smaller ball. Pitchers in particular often don’t want to switch, since they’ve spent years mastering a skill set. “Throwing underhand is very different from throwing overhand,” says Sara, 14. “When I was younger, a lot of girls were switching to softball, but I liked Little League baseball, and the boys were nice to me. I saw no reason to switch.”

Imagine a basketball player spending her entire life learning how to shoot one way, and being told that if she wanted to play for her high school team, she’d have to learn to shoot underhand because that’s how the girl’s game is played. If she didn’t, she’d have to compete against the bigger, stronger boys, diminishing her odds of success. Sounds absurd. But that’s essentially the choice many baseball players have to make. “I tried pitching softball, and it felt terrible,” says Hudek. “I’m more at home on the mound. It’s my natural place.”

In baseball, girls do have a better chance at succeeding against boys than they would in, say, basketball or soccer, since baseball is much less physical than these other games. Sure, a girl is much less likely than a boy to smack a 450-foot home run or throw 90 miles-per-hour. But if a girl has good location and movement on her pitches, or can make solid contact, or has a good glove, she can still be effective on the baseball field.

And if girls really want to level the playing field, they can do what Chelsea Baker did — learn to throw a knuckleball. It doesn’t matter if you’re a 6’3,” 225-pound dude or a 5’4″, 125-lb gal like Baker, who is going into her senior year at Durant High School in Plant City, Florida: if you can make that slow ball flutter, you can get people out. Baker went 3-0 during her junior season, with a 0.74 ERA. In June, the Tampa Bay Rays invited her to throw batting practice before a game. She gave a couple of guys fits.

At Durant, Baker changes in the boys’ locker room, but has her own storage room–with her name on the door–to give her the appropriate privacy. “I walk out, and I’m right there with everybody,” says Baker. “Inside, I have a mirror and stuff with hangers. They set it up nice, I like it a lot. I have a lot more room with my stuff than they do.”

Yes, girls can compete with boys on the baseball field. Still, many players would prefer traditional opportunities in high school — on all-girls teams. “It’s kind of frustrating,” says Kelsie Whitmore, a center fielder and pitcher who will be a junior at Temecula (Calif.) Valley High School this year. She plans on playing for the varsity. “There are teams for different genders in every other sport, but not for baseball.”

“It would just be easier,” says Hudek, who changes in the softball locker room at George Ranch. “As much as they try to make you feel like one of the guys, you can’t really be. You miss out on the locker room bonding.”

If there were girls teams, however, these players would surely miss bothering the boys. “Sometimes you get these rude kids, they get to the plate, and you just know that they think I’m nothing, that it’s stupid that I’m out there,” says Baker, the knuckleballer. “And my catcher goes ‘shut up, dude, she’s going to strike out you out.’ And then I do it. That’s got to be the best feeling in the world.” 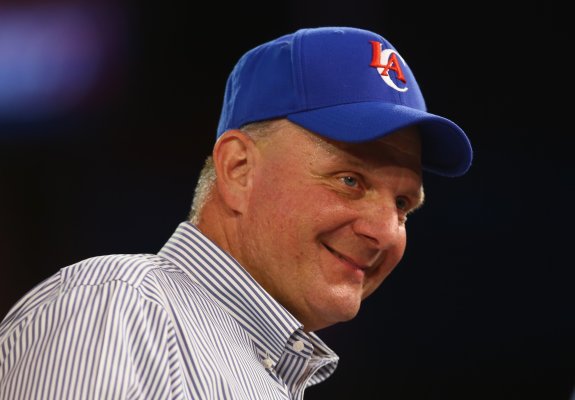 Steve Ballmer Steps Down From Microsoft Board
Next Up: Editor's Pick