Two teenage boys in South Pasadena, Calif. have been arrested after plotting to gun down “as many students as possible” on their first day back at high school, police said Tuesday.

Police made two arrests after “learning that two South Pasadena High School students were plotting to kill three staff members and as many students as possible with firearms,” according to a statement provided by the South Pasadena Police Department (SSPD)

After school officials were informed of a “credible threat” of a potential violent act, they immediately contacted the SSPD, Superintendent Geoff Yantz told parents and students in a statement available on the PTA’s Facebook page.

Police obtained warrants to search both students’ houses and found enough evidence to prompt an arrest. While one suspect was arrested without incident, police had to force entry into the second home and capture the student after he tried to run away from officers.

Yanz assured parents that the police “have the situation under control,” and psychologists and counselors will be available to offer support to students and staff.

“This is a prime example of school officials recognizing suspicious behavior. It was this information that helped prevent a horrific tragedy,” Police Sergeant Brian Solinsky said in the statement. More information will be announced at a news conference at 10 a.m. local time.

Some students posted thanks to the SSPD on their Facebook pages. “I might have died on Thursday if it weren’t for this,” one commented on the police’s statement. “Thank you.”

Incoming freshman Owen Carlson told KTLA 5, “School starts on Thursday, and I’m pretty sure a lot of people will be talking about it.” 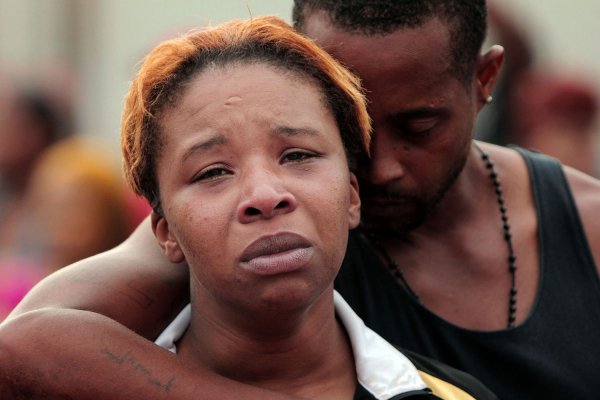 Parents of Slain Ferguson Teen: Don't Lose Focus on Our Son
Next Up: Editor's Pick