The parents of Michael Brown, the teenager slain by police in Ferguson, Mo., have called on the public to focus on their demands for justice and not let the worsening unrest in the St Louis suburb overshadow the circumstances surrounding their son’s death.

“It is a distraction,” said Brown’s mother, Lesley McSpadden, on Tuesday’s broadcast of NBC’s TODAY show, “but we won’t let it distract us to the point where we lose focus.”

“We need to keep the focus on Michael Brown Jr.,” added his father, Michael Brown Sr. The parents appeared on TODAY to demand that charges be brought against Officer Darren Wilson, who fatally shot Brown on Aug. 9.

Meanwhile, the mother of Trayvon Martin, the unarmed Florida teen whose 2012 death also provoked public outrage, vowed to back the family’s cause.”I will support you and your efforts to seek justice for your Michael and the countless other Michaels & Trayvons of our country,” she wrote in an open letter to the family. 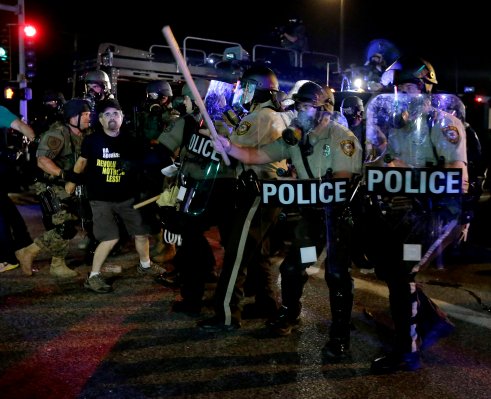 Violence Flares Anew in Ferguson Despite National Guard
Next Up: Editor's Pick