A group of asylum seekers—all Iranian except for one Afghan—en route by boat from Indonesia to Australia on Sept. 7, 2013.
Joël van Houdt—Hollandse Hoogte/REDUX
By Ian Lloyd Neubauer

Over the past six months I have watched in muffled horror as my country, Australia, voted in and then loudly applauded a government that has put into play a policy to stop asylum seekers from landing uninvited on our shores. The Regional Resettlement Arrangement (RRA) was introduced by former Prime Minister Kevin Rudd in a cynical last-ditch effort to hold on to power before he was defeated in a landslide in September’s general elections. Rudd’s successor, Tony Abbott, has aggressively implemented the RRA, which automatically redirects asylum seekers arriving by boat to neighboring Papua New Guinea (PNG). The policy is at best immoral, at worst cruel.

Under the RRA, Australia sends a portion of asylum seekers to outsourced tent prisons run by private security companies in PNG and also the nearby South Pacific island of Nauru. Nearly 2,500 men, women and children are estimated to be in the camps. There, inmates stand a chance of being raped, catching malaria or growing so desperate that some have sewn their lips together to hunger-strike or have asked their keepers for gasoline to self-immolate. In February, a 23-year-old Iranian, Reza Barati, was killed by a blunt instrument during a riot at a detention center on PNG’s Manus Island; scores were injured. Inmates are denied access to lawyers and journalists, and pressured to return to the hellholes they spent their life savings running away from.

If you refuse to go, you languish at the camp. If you are found to be a genuine refugee, as opposed to being an economic migrant, you are given the option only of staying in PNG—Australia is out. This even though the Australian Department of Foreign Affairs and Trade warns its own citizens to exercise a high degree of caution in PNG because of “ethnic disputes,” “a general atmosphere of lawlessness” and “reported incidents of sexual assault, including gang rape.” The U.N.’s refugee agency, UNHCR, has criticized conditions at the camps as “harsh” and not “safe and humane.” After the Manus riot, UNHCR official Ravina Shamdasani said, “It is alarming to see violence against the very individuals who seek protection … Detaining migrants and asylum seekers arriving by boat on a mandatory, prolonged and potentially indefinite basis, without individual assessment, is inherently arbitrary.”

How does a liberal democracy that should be the Asia-Pacific region’s flag bearer for human rights justify such actions? By using algebra and consequentialism—the age-old premise that the ends justify the means.

The RRA is allied with Abbott’s Operation Sovereign Borders (OSB) program to prevent people smugglers sending leaky boats overloaded with refugees to Australia. According to the Department of Immigration and Border Protection, some 1,100 refugees headed toward Australia have drowned at sea in the past five years. The government says OSB is saving lives and also acting as a deterrent—two months have passed without a successful people-smuggling venture. Yet, as a signatory to the 1951 U.N. Refugee Convention, Australia recognizes that refugees have a right to seek asylum regardless of how they got here and whether they hold a valid passport or visa.

Behind the government’s smug righteousness lies a powerful but unspoken undercurrent of Islamophobia rooted in the White Australia Policy—a discriminatory approach to migration fostered in the 19th century that favored applicants from European countries until it was dismantled in 1973. We watch footage of urban warfare in the Parisian banlieues and the shooting of Jewish children in France. We hear about the murder of soldier Lee Rigby in London. We think about the terrorist attacks in Madrid and Boston and New York City. And we say to ourselves, “We don’t want the same thing happening here.”

There are those among us who hope that Barati’s death—and the hundreds of candlelight vigils held across Australia, including a 4,000-strong protest at Sydney’s Town Hall, in his honor—will prove a watershed. Hope that voters will stop pandering to Orwellian fears propagated by populist leaders and realize that with only about one refugee per 1,000 people, we cannot possibly be swamped by boat people. And hope that the government will close the camps and find a humane solution worthy of a wealthy, multicultural nation, lest the world begin to look upon us as the monsters we have become. 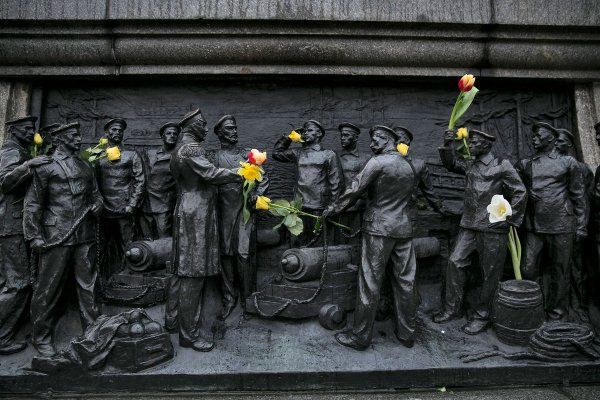 It’s Time to Look Beyond Crimea
Next Up: Editor's Pick