One Result of the Gaza Conflict: Iran and Hamas Are Back Together

Long considered to be the biggest sponsor of Islamic militants battling Israel and designated as terrorist groups by the United States, Iran’s relationship with the Palestinian group Hamas was once touted as among its strongest. Not only had Iran brought Hamas on board the so-called Axis of Resistance, alongside its other regional allies Syria and the Lebanese Hezbollah, but the Islamic Republic had always publicly boasted of its wide ranging support for the group, from providing financial backing to shipping weapons.

However, when the Arab Spring spread into Syria in 2011, the majority Shiite Iran’s long-standing alliance with Hamas deteriorated significantly when the militant group opted to break step with Tehran and support the mainly Sunni rebels against Syria’s Bashar Assad. The falling-out came to a head when the political leaders of Hamas moved their base from Syria to Qatar, a regional rival of Iran.

In retaliation Iran, Syria and Hezbollah reportedly ended their support for Hamas in all fields, effectively ousting it from their Axis of Resistance and cutting off one of Hamas’ most vital lifelines. “The Iranians are not happy with our position on Syria, and when they are not happy, they don’t deal with you in the same old way,” the deputy political leader of Hamas Moussa Abu Marzouk in February 2012, according to the Associated Press.

When the latest battle between Hamas and Israel, called the Zionist Regime in Tehran, flared up in early July, Iran initially remained relatively quiet, though it denounced Israel for the loss of life among civilians. But the number of Palestinian casualties grew, including many children and women, attracting significant international attention and sympathy. (As of Aug. 10 nearly 2,000 Palestinians had been killed according to the UN, along with 66 Israelis.) For Iran, the Gaza conflict was seen as an opportunity to improve its standing in the Islamic world, which had suffered—especially among Sunnis—thanks to its steadfast support of Assad.

Seeking to take advantage of this opportunity and to regain its position as the foremost supporter of the Palestinian militant groups battling Israel—and to reconcile with Sunni Muslims throughout the Middle East—a significant number of Iranian officials have now gone on the record to voice their support for Hamas, the main militant group in Gaza, over its latest battle with Israel. “We are prepared to support the Palestinian resistance in different ways,” said the commander of the revolutionary guards, Major General Mohammad Ali Jafaria, during a speech on Aug. 4, according to the semi-official Fars News Agency. “Just as until now any show of strength in Palestine which caused the defeat of Zionists has its roots in the support of the Islamic Revolution [of Iran].”

The first sign of this shift came on July 29, when Iran’s Supreme Leader, Ayatollah Ali Khamenei, praised the resistance against Israel in a speech, calling on the Islamic world to equip Palestinians according to his official website Khamenei.ir. Two days later Khamenei was echoed by one of Iran’s top military officers, Major General of the Guards Qasem Soleimani, who commands the elite Quds Force of the Islamic Revolution Guardians Corps. Soleimani published a rare public letter to the “Political leaders of Hamas, Islamic Jihad and all the resistance,” lauding their continued efforts against Israel. The letter promised that Iran “will continue to perform our religious duty to support and help the resistance till the moment of victory when the resistance will turn the earth, the air and the sea into hell for Zionists,” according to the official IRNA news agency.

That was followed by numerous officials, MPs and military figures, all issuing statements in support of Hamas, and echoing Khamenei’s call for unity among Muslims. “In our defence of Muslims we see no difference between Sunni and Shiite,” said General Jafari, the commander of the guards, in an Aug. 4 speech. Some even promised a supply of weapons to Hamas, which has been officially designated as a terrorist organization by the U.S. “You will get the weapons and ammunition you need no matter how hard it might be to do so,” said Mohsen Rezaei, the former wartime commander of the revolutionary guards in a public letter to the commander of the military wing of Hamas Mohammed Deif, according to the semi-official Fars news agency.

With Iran already deeply involving in shoring up the Iraqi and Syrian governments against militant Sunni groups, it is doubtful that these promises of support and weapons for Hamas could be fulfilled anytime soon, and while the Islamic Republic is also striving to break the impasse in its nuclear negotiations with the U.S. and other powers, arming militant groups against Israel, America’s main ally in the region, could be potentially disruptive for those talks. But in his letter to Deif, Rezaei tried to address that doubt, writing that “Israel is mistaken in its belief that the instabilities in Syria, Iraq and Egypt, and the pressure on Iran from the United States’ economic blockade has given them an opportunity.”

In the meantime Iran has continued its charm offensive on Sunni Muslims. The head of the influential State Expediency Council, Ayatollah Ali Akbar Rafsanjani, met with Iran’s top Sunni clerics and activists recently, and called for unity among all Muslims. Promising them that Iran intended to support and defend all Abrahamic religions and sects—Rafsanjani condemned any act that could cause divisions among Muslims. Backing up that position, the Iranian Intelligence Ministry announced on Aug. 3 that it had shut down the offices and arrested the staff of four extremist Shiite satellite channels that regularly incite intolerance and hatred against other Islamic sects, especially Sunnis.

Hamas—which has been politically isolated since its last remaining backer, former Egyptian president Mohamed Morsi, was removed from power—has welcomed reconciliation with its old ally and benefactor. Hamas’ official representative to Iran, Khalid al-Qoddoumi, reportedly said on Aug. 9 that Iranians “have always been the first in line to help and support our people.” Reports from the semiofficial ISNA news agency also indicate that a long postponed visit to Iran by the head of Hamas, Khaled Mashal, is set to happen soon. For Israel, the ongoing conflict in Gaza has had one more unexpected and unwelcome outcome: Iran and Hamas are together again.

Correction: Because of an editing error, the date of the Iranian Intelligence Ministry’s announcement that it had shut down the offices and arrested the staff of four extremist Shiite satellite channels was misstated. It was Aug. 3. 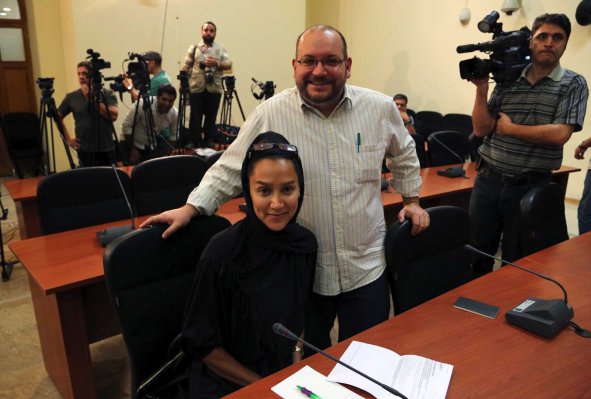