Obama Voices Concerns on Police Militarization in Wake of Ferguson

President Barack Obama said Monday he is open to reviewing U.S. federal support for local police departments that has been used to purchase military-style equipment, in the wake of intense clashes between protestors and police in Ferguson, Mo.

Speaking from the White House where he returned early Monday for a brief interlude from his Martha’s Vineyard vacation, Obama said it was important to maintain a distinction between police and military, calling it a hallmark of the American system.

“I think it’s probably useful for us to review how the funding has gone, how local law enforcement has used grant dollars to make sure that what they’re purchasing is stuff that they actually need, because there is a big difference between our military and our local law enforcement and we don’t want those lines blurred,” Obama said.

Obama also announced Attorney General Eric Holder would travel to Ferguson on Wednesday for briefings on the investigation into the death of teenager Michael Brown, whose death has sparked days of protest in the St Louis suburb.

Holder said in a separate statement he would meet with the more than 40 FBI investigators on the ground in Ferguson, as well as with prosecutors from the DOJ’s Civil Rights Division and officials from the U.S. Attorney’s office.

The president appealed for calm on the ground in Ferguson, saying that a small group of bad actors are raising tensions. “It is clear that the vast majority of people are peacefully protesting,” he said. “It is also clear that a small minority are not.”

“Let’s seek to heal, rather than to wound each other,” Obama said.

Early Monday, Missouri Gov. Jay Nixon ordered in the National Guard to assist in securing Ferguson after another night of clashes between police and protestors, but lifted a midnight to 5 a.m. curfew on the city which had been in place for two nights. Obama said he raised the issue of ensuring that the Guard’s mission is “limited and appropriate.”

“I’ll be watching over the next several days to assess whether it’s helping rather than hindering progress in Ferguson,” he said.

Obama highlighted his “My Brother’s Keeper” initiative to try to reverse generations of challenges noting that “in too many communities around the country, a gulf of mistrust exists between local residents and law enforcement. In too many communities, too many young men of color are left behind and seen only as objects of fear.” But in the short term, Obama said the priority is ending the violence and ensuring justice is served fairly.

“Right now, what we have to do is to make sure that the cause of justice and fair administration of the law is being brought to bear in Ferguson,” Obama said. “In order to do that, we’ve got to make sure that we are able to distinguish between peaceful protestors who may have some legitimate grievances and maybe long-standing grievances and those who are using this tragic death as an excuse to engage in criminal behavior and tossing Molotov cocktails or looting stores. And that is a small minority of folks, and it may not even be residents of Ferguson, but they are damaging the cause, they’re not advancing.” 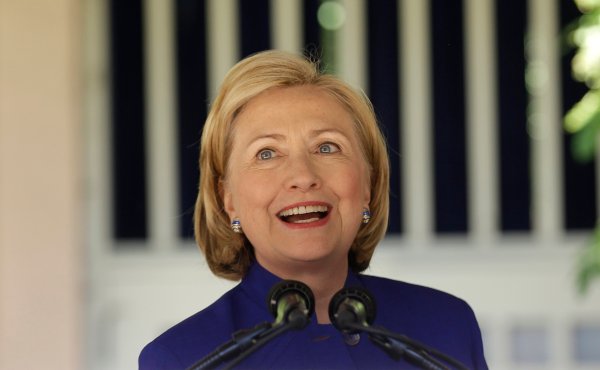 Hillary Going Back to Iowa
Next Up: Editor's Pick