US President Barack Obama speaks about the US involvement in Iraq, as well as the situation in Ferguson, Missouri, in the Brady Press Briefing Room of the White House in Washington, DC, August 18, 2014.
Saul Loeb—AFP/Getty Images
By Michael Crowley

In 2003, George W. Bush was too quick to declare that “major combat operations in Iraq have ended.” In 2014, Barack Obama may be too slow to admit that they are just beginning.

On Monday, President Obama boasted to White House reporters that U.S. airstrikes had helped Iraqi forces reclaim the Mosul Dam, which Islamic State in Iraq and Syria (ISIS) fighters captured in early August. That was great news. A dam breach — from sabotage or poor maintenance — could have drowned thousands and even flooded the U.S. embassy in Baghdad.

But it was not an objective Obama had publicly mentioned before, even though ISIS had controlled the dam for two weeks. Does Obama worry about “mission creep,” asked a Reuters correspondent? No way, Obama said. “I have been firm from the start that we are not reintroducing thousands of U.S. troops on the ground to re-engage in combat,” the President said.

“Typically what happens with mission creep is we start deciding that we’re the ones who have to do it all ourselves,” Obama added.

Of course, mission creep doesn’t have to mean a huge ground force, or going it alone. (America became mired in Vietnam while fighting in tandem with South Vietnamese forces.) It can simply mean expanding goals that lead to an unexpectedly large military campaign. And we’re already seeing signs of that in Iraq.

Rewind to August 7, when Obama spoke in prime time to announce his first airstrikes in Iraq. He described two limited and discrete operations. One was “targeted airstrikes to protect our American personnel” in the Kurdish city of Erbil, which ISIS was threatening to capture. The other was a humanitarian mission to save thousands of Yazidi civilians trapped by ISIS on a mountain and facing what Obama called “an act of genocide.”

Obama can check those boxes: A Kurdish counteroffensive backed by the U.S. and Baghdad has driven ISIS away from Erbil. As for the Yezidis, Obama said on Friday that “the situation on the mountain has greatly improved” thanks to U.S. efforts, and that most have escaped to safety.

But then another item was quietly added to the to-do list: the Mosul Dam. Announced with little fanfare by a Sunday White House statement, the operation entailed 35 airstrikes on ISIS positions in the area.

On Monday Obama justified that action as “directly tied to our objective of protecting Americans in Iraq,” because a dam breach would have “endangered our embassy compound in Baghdad.”

Never mind that Baghdad is more than 250 miles south of Mosul, presumably allowing time for a relocation or evacuation of U.S. personnel. It’s hard to fault a casualty-free operation that might have averted a catastrophe — and killed some ISIS fanatics along the way.

The worry is that Obama’s rationale of “protecting Americans in Iraq” can be stretched to justify almost any kind of military action — especially now that he has more than doubled the U.S. presence in Iraq to nearly 2000 personnel since June. (A key stage of mission creep in Vietnam involved sending troops to protect U.S. air bases in that country.)

But Obama has given himself even broader license than that. When he announced the dispatch of 300 military advisors to Iraq back on June 19, Obama wrote himself something like a blank check.

“[W]e will be prepared to take targeted and precise military action,” Obama said, “if and when we determine that the situation on the ground requires it.”

You can support all those actions and still find Obama’s explanations a little cloudy. After all, Obama has promised “limited” military action before — only to shatter those limits. In March 2011, Obama said he was ordering airstrikes in Libya to prevent a civilian massacre by regime forces in Benghazi. The ensuing air campaign lasted for seven months and involved more than 26,000 air sorties by a multinational coalition.

Could we be at the start of something similar? The Pentagon says the U.S. has already conducted 68 airstrikes in Iraq since August 8, and Obama is talking about more assistance for the new government forming in Baghdad.

Fortunately for Obama, the public isn’t creeped out just yet. Fifty-four percent of Americans approve of his airstrikes so far, according to an August 18 Pew Research Center-USA Today poll.

But that support may be fragile. Pew also found that 51 percent of Americans worry Obama “will go too far getting involved in the situation.”

Obama’s vow not to commit ground troops to combat will help maintain political support. Still, that number could grow — especially if he doesn’t explain clearly how his mission can be neither accomplished nor creeping. 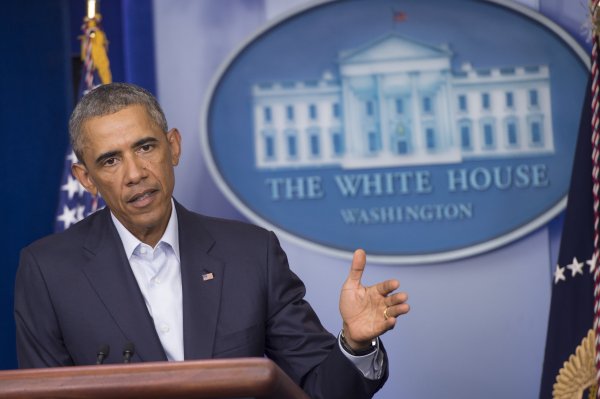 Obama Hails Retaking of Iraqi Dam
Next Up: Editor's Pick