Tampa Bay Rays' David DeJesus gets a bucket of ice dumped on his head from video coordinator Chris Fernandez as part of the ALS Ice Bucket Challenge before a baseball game against the New York Yankees on Aug. 17, 2014, in St. Petersburg, Fla.
Chris O'Meara—AP
By Jia Tolentino

Over the last week and a half, the ALS Ice Bucket Challenge and the Ferguson, Missouri protests have spread over social media almost simultaneously, yet entirely discretely: twinned channels of wildfire blazing through quadrants of your attention that barely touch. The Ice Bucket videos took off around July 29; Michael Brown was shot on August 9.

The ALS challenge seeks to raise awareness and money for Lou Gehrig’s disease, a death sentence for the approximately 30,000 Americans who are at any given time afflicted. News of the Ferguson protests spreads in the interest of highlighting the brutal, unjust degree to which the state may still protect a white man who kills an unarmed black man.

In both instances, social media serves as an essential channel. It is the way we talk to each other now.

This is purely anecdotal, but try it on for size: the ALS challenge is almost entirely confined to Facebook, the Ferguson protests to Twitter. Furthermore, there appears to be an extraordinarily small overlap in terms of people who are seriously interested in both.

I don’t believe in zero-sum games and I don’t write this to imply that neurodegenerative disease and human rights abuse have been put in direct conflict. Rather, I’m fascinated with what appears to be the opposite. The contemporaneity of these waves in social communication have revealed these ills — as well as the advocates for their solutions — to not just be non-conflicting but also emblematic of two separate paths of identifying and addressing unfairness, two roads that are inherently miles and miles apart.

Ferguson, unlike the Ice Bucket Challenge, is an opt-in situation, and the demographic division between those who have chosen to get involved in one or the other cause is startling. Tibetan monks on the one hand, Mark Zuckerberg on the other; Amnesty International in Missouri, the Kennedys in Hyannis Port. Maybe for your own social networks the divide is starkly blue and red; it is, very much, for me.

Conversely, those who have experienced significant structural gaps in their advantage understand that our country reserves its right to deliver justice. Michael Brown was shot six times from a distance, once through the top of his skull; by any accident of birth and looks and circumstance, he could have been me or you.

There is a Mary Oliver poem called “The Summer Day”: I don’t know exactly what a prayer is/ I do know how to pay attention.

Ice Bucket videos have raised more than $13 million for the ALS Association in just the last month. The presuppositions behind this good work are clear and palatable and apolitical: here is an ill that comes at random; here are 30,000 people suffering who didn’t do anything wrong; here is a death that could be prevented; here is my face and my dollar trying earnestly to help.

No matter the cause or the victim, it seems an excellent use of social media to draw people’s attention to the bone-grinding hideousness of having someone’s life taken away right in front of you, and there being nothing you can do to stop it except to show people, over and over — this happens, this keeps happening, let’s make it stop.

And yet the capricious visitation of deadly disease exists side by side with an entire American history of killing black people and stealing from them and getting away with it — a terror that, unlike disease, is miserably logical in terms of its victims and could be fixed by a path that is right in front of us: having people in power, from patrol cop to supervisor to governor to president, advocate for systematic justice or racial reparation or even honest admission of the homegrown genocide we’ve been stuck with for centuries.

For both social media movements, sharing implies responsibility. We are complicit, by our inaction, in the lack of a working cure. But the tacit acknowledgment that there is blame to be shared and apportioned in Ferguson cuts much deeper and stops right at a telling, crucial boundary. We can’t call our friends to action on a target that remains simultaneously the plainest and most disputed evil in America, a target that many people refuse to believe exists. We’re not tagging three friends in each picture we see of a black woman whose “looter” friends broke into McDonalds to pour milk on her tear-gassed face. We’re not indicting our aunts and nephews and forcing them to acknowledge the millions of lives lost to racist policing.

It would be gauche to “challenge” our friends to deal with police-sanctioned murder, particularly when so many of our “friends” may believe what many cops have believed before us: that black bodies insinuate a crime.

And all of this makes sense. There are different devils behind these two ways a man can die in America. ALS is the devil that leaves us blameless, and Ferguson is the devil that is us, the one we dance with every day. In both cases we bow down and get shot in the skull regardless, but one road to deliverance has been open for 150 years.

Still, to which challenge did President Obama respond more quickly? The sickness in Ferguson is curable, will last.

Jia Tolentino is a former editor of the Hairpin whose work has also appeared in The New York Times. 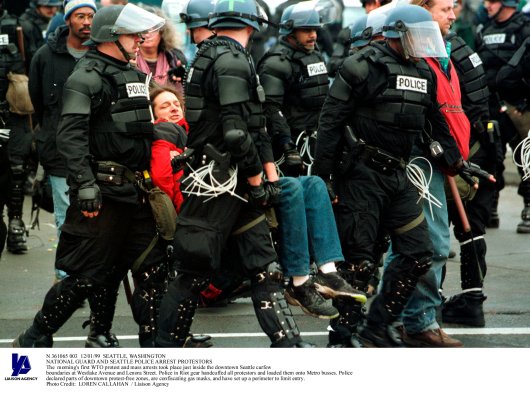 Militarizing Ferguson Cops With Riot Gear Is a Huge Mistake
Next Up: Editor's Pick