The Viral Ice Bucket Challenge Has Raised $15.6 Million For ALS

The extremely viral ALS Ice Bucket Challenge has led to record donations to the ALS Association, raising some $15.6 million in contributions to the group and and its national affiliates since July 29 — compared with less than $50,000 in the same period last year.

The $12 million figure represents more than half of the funds raised in all of 2012, when the national organization brought in $19 million in contributions.

The total has been boosted by a flood of celebrities participating in the Ice Bucket Challenge, in increasingly creative ways. Project ALS, another charity dedicated to combatting Lou Gehrig’s disease, said it experienced a surge in fundraising after Ben Stiller and Ricky Gervais took the Challenge and asked people to contribute to that organization specifically. The charity raised $96,000 over a single weekend, compared to just a few thousand dollars in the first weeks of August 2013.

What to do this unexpected windfall? Newhouse said the money will allow the ALS Association to “think outside the box.

“We need to take some time to make some very clear decisions about how best to spend this money,” said Newhouse, who said she will consult a number of people including the families that started and popularized the ALS challenge.

One clear priority will be research, on which the organization currently spends more than $6 million a year. Project ALS says all the money the organization receives will go toward innovative research and “staffing up.”

Both organizations said that no matter how the money is spent, the Challenge has brought invaluable awareness to their cause. 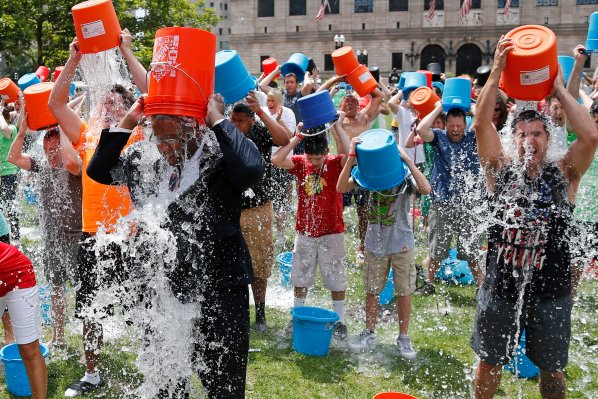 Here's How the ALS Ice Bucket Challenge Actually Started
Next Up: Editor's Pick