The family of Michael Brown has called for the arrest of the officer who shot and killed the unarmed black teen in Ferguson, Mo., their attorneys said, after an independent autopsy revealed Brown had been shot at least six times in the altercation.

In a press conference Monday following the release of an independent autopsy conducted for the family, attorneys and medical examiners said that Brown had been shot at least six times, but likely died from a bullet that entered at the top of his head.

The independent autopsy was conducted by Dr. Michael Baden, former chief medical examiner of New York City, and was requested by the victim’s family because “they could not trust what was going to be put in the reports about the tragic execution of their child,” according to family attorney Benjamin Crump.

Crump said that after the autopsy, Brown’s mother asked, “what else do we need to give them to arrest the killer of my child?”

The autopsy also appears to verify eyewitness accounts of the shooting, according to attorneys and Baden, and suggests that Brown may have been shot while trying to surrender to the officer. “Why would he be shot in the very top of his head?” asked Daryl Parks, another attorney for the Brown family. “A 6’4″ man? It makes no sense.”

Michael Brown was shot and killed during the daytime on Aug. 9 by a Ferguson police officer named as Darren Wilson, and his death has sparked mass demonstrations and rioting that police have attempted to quell with tear gas and smoke canisters. After a week of protests, Missouri Governor Jay Nixon ordered the National Guard to Ferguson Monday to try to preserve the peace.

Forensic examiner Dr. Michael Baden, who is known for reviewing the autopsies of John F. Kennedy and Rev. Martin Luther King, Jr., said that the autopsy revealed no signs of a struggle, and that Brown likely died from the bullet wound to the top of his head. He also said he did not recover any gunshot residue from the body, implying that the gun was at least 1-2 feet away from the victim, but he cannot be certain of that until he sees Brown’s clothes.

Dr. Baden also noted the exceptional national attention this case has attracted. “Many black men die of accident or homicide in this country, but rarely has the President of the United States gotten involved,” he said. 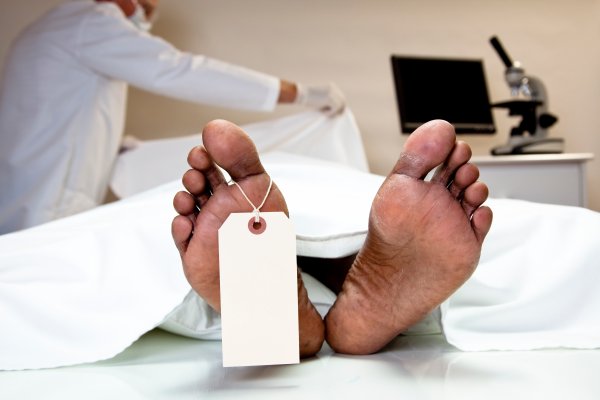 Ohio Morgue Worker Admits to Sex with 100 Corpses
Next Up: Editor's Pick