Ferguson Violence Again Puts Obama in the Spotlight on Race

Protestors call for President Barack Obama to come to Ferguson during a peaceful rally in Ferguson, Mo. on Aug. 16, 2014.
Jon Lowenstein—NOOR for TIME
By Zeke J Miller

As violence raged in Ferguson, Mo., last week, President Barack Obama was hobnobbing with high-class political friends at an exclusive country club. On Sunday night, as the situation on the ground hit new lows, he and First Lady Michelle Obama were enjoying a jazz concert followed by dinner on Martha’s Vineyard, where they were vacationing.

The death of unarmed black teenager Michael Brown at the hands of a white police officer, and the subsequent violence by police and protesters, has once again put Obama on defense over his handling of crisis situations, coming under fire from all corners of the political spectrum for a slow response to the controversy. In recent days, Obama has faced calls to visit Ferguson first-hand to see the violence and attempt to bring about a peaceful end to it. But Obama, wary of being seen as diverting law enforcement resources, is unlikely to make the trip until the situation calms down.

White House aides said Obama has been repeatedly briefed on the situation, most recently by senior advisor Valerie Jarrett on Sunday after the latest escalation. On Thursday, the President offered a brief statement appealing for calm in Ferguson and delivering an indirect rebuke to the heavy-handed tactics of local police. Obama flew back from Martha’s Vineyard on Sunday for previously scheduled meetings. He is set to be briefed by Attorney General Eric Holder on Monday afternoon and may address the crisis again later Monday.

But with the violence raging in Ferguson set against the backdrop of the nation’s continued struggle to overcome its history of racial division, Obama is once again on the hot seat over an issue he’s been notoriously uncomfortable opening up about.

Obama’s memoir, Dreams from My Father, explored the his tortured relationship with race, with the future President writing of a difficult upbringing and the challenges of trying to find himself. The coming-of-age story is full of Obama’s personal frustrations and lapses as he tries to navigate his own complicated identity. He sought out work as a community organizer partly as a result of that internal struggle.

By 2004, Obama offered himself as an example of a burgeoning post-racial America, recounting his personal narrative as the son of a Kenyan student and a Kansas anthropologist. “I stand here today grateful for the diversity of my heritage, aware that my parents’ dreams live on in my two precious daughters,” Obama said in the Democratic National Convention keynote speech that would catapult him to the national stage. “I stand here knowing that my story is part of the larger American story, that I owe a debt to all of those who came before me, and that in no other country on Earth is my story even possible.”

For the next four years, Obama toed a careful line, casting his campaign as historic but rarely acknowledging why. When he announced his candidacy for the White House, Obama only alluded to President Abraham Lincoln affirming “that beneath all the differences of race and region, faith and station, we are one people.” But the sermons of one-time Obama pastor Rev. Jeremiah Wright brought race back to the forefront, and opened the door for Obama’s most eloquent and developed remarks on race.

After initially trying to downplay Wright’s impact, the Obama campaign picked the National Constitution Center in Philadelphia as the location for the detailed speech on race, titled “A More Perfect Union.”

“Race is an issue that I believe this nation cannot afford to ignore right now,” Obama said, calling for a national conversation on both the progress made since the Civil Rights era and the work as yet to be done.

But once in office, Obama abandoned that conversation for more pressing priorities, from the economy to health care to pulling U.S. troops out of Iraq. His race, he hoped, would be a footnote to his policy agenda. And when he did try to engage in that conversation, he got burned. In 2009, the President hastily waded into the controversy surrounding the arrest of Henry Louis Gates Jr. at his Cambridge home, saying the officer involved had ” acted stupidly” by arresting the scholar, before walking it back under fire from police groups. He convened a “beer summit” between the two men involved in an effort to put out the flames.

By the 2012 death of Trayvon Martin, Obama conveyed an emotional—if not policy-minded—approach to the controversy. “If I had a son, he’d look like Trayvon,” Obama said, while saying he would stay out of the substance of the case while the Department of Justice carried out its investigation. In May 2013, delivering the commencement address at Morehouse College, Obama came under fire from some in the black community for a lecturing tone to predominantly-black audiences.

“Well, we’ve got no time for excuses—not because the bitter legacies of slavery and segregation have vanished entirely; they haven’t,” Obama told graduates. “Not because racism and discrimination no longer exist; we know those are still out there. It’s just that in today’s hyperconnected, hypercompetitive world, with millions of young people from China and India and Brazil, many of whom started with a whole lot less than all of you did, all of them entering the global workforce alongside you, nobody is going to give you anything that you haven’t earned. And moreover you have to remember that whatever you’ve gone through pales in comparison to the hardships previous generations endured—and they overcame, and if they overcame them, you can overcome them too.”

But when George Zimmerman was acquitted in Martin’s killing months later, Obama marked a new era in his public approach to race, speaking out in strikingly personal terms about his own upbringing and the challenges facing the nation. In a surprise appearance in the White House briefing room, Obama declared that “Trayvon Martin could have been me 35 years ago,” and spoke openly about hearing the sound of doors locking as he walked down a street, even as a senator. “There has been talk about should we convene a conversation on race—I haven’t seen that be particularly productive when politicians try to organize conversations,” Obama said, referencing his own experiences. “They end up being stilted and politicized, and folks are locked into the positions they already have.”

But the Martin tragedy set the Obama Administration’s consideration of policy solutions into high gear. With the clock ticking until he leaves office, Obama and Holder are attempting to seize the opportunity to reform the nation’s criminal justice system from within, while using the of the bully pulpit to promote personal and family responsibility within the black community. 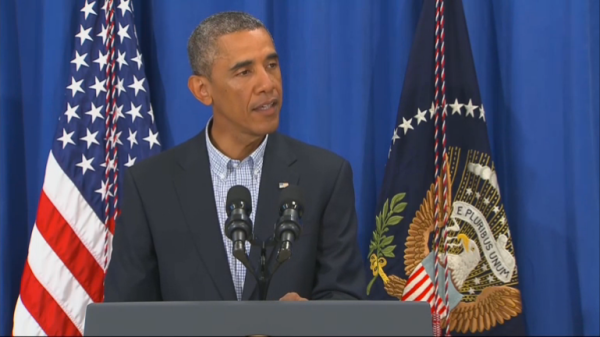 LIVE: Obama Speaks on Ferguson
Next Up: Editor's Pick