Standing before a crowd at the Iowa State Fair, perspiring slightly in sun that had finally emerged after two days of rain, Democratic National Committee Chair Debbie Wasserman Schultz told the crowd what she really thought about Republican Iowa Senate hopeful Joni Ernst.

“She’s like an onion of crazy; the more you peel back the layers, the more disturbing it is,” Wasserman Shultz said, followed by a cheer of audience approval.

The Democratic Senatorial Campaign Committee went up with a television ad on Monday entitled, “Joni Ernst & Sarah Palin¹s Tea Party Agenda Is Too Extreme For Iowa.”Joni Ernst is the only Republican Senate nominee in the country who chose to campaign with Sarah Palin because no one is more in line with Palin’s Tea Party ideas that are bad for Iowa families,” said Christina Freundlich, communications director of the Iowa Democratic Party. This is the conventional wisdom Democrats have been pushing in this too-close-to-call race between State Sen. Ernst and Rep. Bruce Braley, the Democratic candidate to replace retiring Sen. Tom Harkin, also a Democrat: Ernst is an extreme, Tea Party nut job, the female version of Ted Cruz. The problem with this line of rhetoric is: it’s not true.

Ernst broke out in the primary, despite being enormously outspent by retired businessman Mark Jacobs, with a pair of innovative commercials. In one, she aims a gun at the camera while a narrator says, “Once she sets her sights on Obamacare, Joni’s gonna unload.” Then she fires. In another, she talks about growing up on a farm castrating pigs, and how she knows how to “cut pork.” Both drew national attention for their boldness—some calling them Palinesque— and in that respect, they worked. With relatively little money or name recognition, Ernst won the GOP primary with 56% of the vote.

All primary candidates say things they inevitably regret in the General Election and Ernst is no exception. Since the General Election has begun, videos of Ernst talking about Agenda 21, a Glenn Beck conspiracy theory about the United Nations’ superseding U.S. laws, states nullifying federal laws and impeaching Obama have surfaced. Ernst has since backpedaled from all of these statements, saying the impeachment talk, in particular, was taken out of context, arguing that she was answering a hypothetical question.

To be sure, Ernst is more conservative than most Republicans in the Senate. She believes life begins at conception, and co-sponsored a personhood amendment in the Iowa State Senate. Personhood laws often ban several types of contraception, as well as Plan B, on the grounds that conception could have taken place already.

Ernst, who served more than 20 years in the military, including a deployment to Iraq, is also enthusiastically pro-gun. And if elected, she would make it one of her top priorities to repeal Obamacare. She also enjoys the support of those she has been lobbed together with: Cruz and Palin.

That said, Ernst’s other endorsements include Mitt Romney, whom she endorsed in the 2008 and 2012 Iowa caucuses, and Florida Sen. Marco Rubio. She’s also the only 2014 primary candidate to be backed by both the Chamber of Commerce and the Senate Conservatives Fund, which has funded Tea Partiers looking to usurp establishment candidates.

When asked which Senator she’d be most like, Ernst tells TIME she thinks she’d be like Nebraska Sen. Deb Fischer. Fischer was elected as a little-known Tea Partier, and was also endorsed by Palin and accused of being the “Sarah Palin of Nebraska” by some Democrats at first, but has since proven to be a relatively quiet, self-described compromiser in the Senate. “We both come from Plains states and we have a lot in common both stylistically, and ideologically, speaking,” Ernst says.

Ernst’s campaign argues that in the State Senate, she has a record of bucking party lines in order to compromise. She pushed her leadership to pass the Valor Act, which banned lying about military medals; even though many had reservations that the bill violated the First Amendment. As a county auditor, she opposed a salary increase for county employees. Rather than simply opposing it, though, she did a survey of the county’s private businesses, asking if anyone was increasing salaries during the economic downturn.

The results built support opposing the salary bump. She also took on her own party to help pass bills which required public schools to test for dangerous toxins in their buildings, protected funding for mental health services for Iowans and allowed parents of children with severe epilepsy to buy non-addictive cannabis oil.

In other words, Ernst was hardly the bomb-throwing Ted Cruz of the Iowa Senate.

To compare Ernst to Palin these days isn’t fair either. Palin now is more of an entertainer akin to Rush Limbaugh than a politician. But Ernst does bear a resemblance to the politician Palin once was–the Palin who had an 80% approval rating in Alaska and saw through compromise legislation. As a new governor, Palin was never shy about taking on the establishment, a trait which helped make her name, but it wasn’t until her stint as John McCain’s pitbull VP choice that she became so polarizing.

To be fair, Republicans play the same comparison game with Democrats. House minority leader Nancy Pelosi is cartoon of “San Francisco extremism.” Wherever Sen. Elizabeth Warren goes, accusations of Typical Massachusetts Liberal follow. When Warren stumped for female candidates in Kentucky and West Virginia recently, Republicans tarred those candidates as “Elizabeth Warrens” of hyper-partisan extremists, which of course they weren’t.

It is hard enough to elect women to office where they still have less than 20% representation. It becomes exponentially harder when strong women are caricatured to political ends. This is no more true than with Republican women. There was a time when Democrats labeled Sen. Kelly Ayotte the “Sarah Palin of New Hampshire.” Ayotte has proven to be so un-Palinesque that Palin withdrew her endorsement years ago.

Now, it seems, Ernst is one Tina Fey sketch away from being unfairly boxed into a persona she is working hard to avoid. 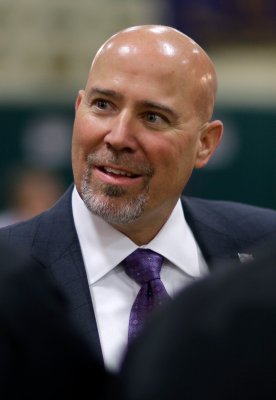