Demonstrations in Ferguson turned violent in the predawn Saturday hours following a period of relative calm, with protestors looting stores and clashing with police officers.

At a press conference Saturday Governor Nixon commended the peaceful protestors but said that continuing violence was “unacceptable.” The curfew, he said, is intended to maintain security in Ferguson. “This is not to silence the people of Ferguson or this region, but to contain those who are drowning out the voice of the people,” Nixon said. “If we are going to achieve justice, we must first have and maintain peace.”

The curfew will remain in place from midnight until 5 a.m.

But interviews with protesters suggested a curfew would be difficult to enforce. At the QuikTrip on West Florissant, where protesters have been waving signs and honking horns for days, demonstrators on Saturday afternoon balked at the idea.

“They’re not going to clear the streets,” said Daniel Moore, 42, of Ferguson. Moore, who said his brother Jason was shot to death by a Ferguson police officer in 2011, added the community is “not going to listen to that.”

“We came to play ball with the police,” said a protester in a Cardinals jersey who declined to give his name. “Tell them to squad up. Vest up.”

Missouri Highway Patrol Capt. Ron Johnson, an officer widely credited with helping to quell violence in Ferguson at the end of last week, will be leading police efforts in the suburb. Johnson is a 12-year veteran of the force and hails from Ferguson.

Johnson said that the curfew will not be enforced with tear gas or armored trucks, referring to the tactics police employed early last week that outraged local residents. At the conference, Nixon responded to outraged calls of protest among attendees in the hall as he announced a curfew.

“If we want justice, we cannot be distracted,” Nixon said. “Our focus at this time is on the security and making sure we get peace.”

During the often rowdy press conference in a local church, cries rang out calling for an indictment of the officer, Darren Wilson, and condemending the plan to impose a curfew. “Why is there a plan to suppress us?” asked Jeffrey Hill Jr., 24. “We’re not going away and the more they try to suppress us, the louder we will ask the important questions.”

Hill, one of the loudest question-askers at the press conference, plans to organize more people to protest in Clayton, the wealthy suburban St. Louis County seat where any charges against the officer would originate. “Clayton, here we come,” he told TIME.

Other people were livid that the officer had been placed on paid administrative leave and sent out of state. “These are our tax dollars, and we’re sending him on a vacation?” said Lynzimarie Franklin, 24. “…who took care of Mike Brown’s safety?”

The FBI has launched a separate investigation into the fatal shooting of Brown, and Capt. Johnson said they had reached out to local residents to gain more eyewitness testimony.

With reporting by Alex Altman and Kristina Sauerwein in Ferguson, Mo. 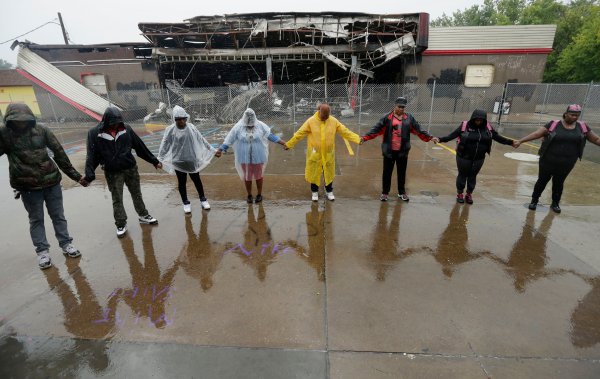 Ferguson Protestors Mark a Week Since Brown Shooting
Next Up: Editor's Pick