Preachers Focus on Faith in the Shadow of Ferguson

Lesley McSpadden the mother of slain teenager Michael Brown joins a capacity crowd of guests at Greater St. Marks Family Church to discuss the killing of her son and the civil unrest resulting from his death on August 12, 2014 in St Louis, Missouri.
Scott Olson—Getty Images
By Elizabeth Dias

To say it has been a tough week in Ferguson hardly begins to address the scope of all that has gone down in the country’s heartland these past seven days. The week has brought a teenager’s death, protests, looting, clashes with police, the national spotlight and a nationwide uprising, not to mention deep questions about race and justice in America.

On the first Sunday since the unrest exploded and the morning after Governor Jay Nixon declared a state of emergency and imposed a curfew, many in the Missouri town will attend worship services at one of the dozens of churches that line its streets, giving religious leaders the challenging task of somehow trying to help their communities make sense of their new reality.

Karen Knodt, the pastor of Immanuel United Church of Christ in central Ferguson, plans to preach about the week’s events when her community gathers this Sunday. She is one of the many pastors worldwide who base their weekly sermons off the lectionary, a schedule for reading Scripture aloud in church. One of the main texts scheduled for this weekend comes from the prophet Isaiah, and is timely given the week’s context: “This is what the Lord says: ‘Maintain justice and do what is right, for my salvation is close at hand,  and my righteousness will soon be revealed.’”

Many congregants in her 700-person-strong church have been lifelong residents of Ferguson, Knodt explains, and have watched the town’s demographics change from a predominantly German to African-American community. This week she has been checking on members to gauge their safety and stress, and meeting with other clergy to work together to plan their response. Some church members have been working to help clean up looted businesses, she says, and others have launched a special food drive to address empty food pantries in town.

This Sunday, one of her main challenges is to encourage members not to give in to fear. “The reactions in the congregation range from lock the doors to let’s be on the front lines and offer what we can,” she says. “Spiritual needs are mostly how not to live in fear, but to be present to the tragedy and the frustrations, to have compassion for all our neighbors and courage to face our divisions and find ways to live and unify the community across racial, geographic, and class lines.”

Down the street is St. Stephen’s Episcopal, where Reverend Steve Lawler has been reaching out this week to members of both the white and black communities. No one he has talked with so far knew Michael Brown, the 18-year-old killed last Saturday, but some have known the police officer involved in his death. “The Ferguson people I have talked to are hopeful, saddened, outraged, defensive, engaged, scared, prayerful and deeply committed to getting through this difficult time together,” he wrote in an update letter to friends and family in the Episcopal community.

The Ferguson Ministerial Alliance, the St. Louis Clergy Coalition, and the NAACP have been working to bring people together, Lawler says. He is also noticing ways his community is taking pains to support the town—from a group of women making its way through town eating at local restaurants to thank them for staying open, to a young mom and her kids dropping off sandwiches and water to protestors gathered at the QuikTrip on West Florissant, to a man whose son was murdered two years ago dropping food to the food pantry and talking about the sorrow of the family, police, and community.

“I have been living with this quote, ‘Do your little bit of good where you are,’” Lawler says, citing the words of Desmund Tutu. “‘It’s those little bits of good put together that overwhelm the world.’”

The preachers of Ferguson are not alone in their challenge of guiding congregants through what has happened and what lies ahead. Ferguson has sparked a national moment, and pastors across the country face the challenge of speaking to congregations who have watched the crisis unfold all week.

The Rev. Otis Moss III, a black liberation theologian who preaches at Chicago’s Trinity United Church of Christ, said he would quote from Psalm 142 — “a psalm of lament and cry for help when the writer felt like an outcast [or] criminal, and not a citizen in his own nation” — and also from the song “Makes me Wanna Holla” by Marvin Gaye. “There is a line in the song that states it makes me wanna holler and throw up both of my hands,” he says.

Reverend Leslie D. Callahan, who leads the historically black St. Paul’s Baptist Church in Philadelphia, has been preaching a series called “Freedom Summer,” to commemorate the 50th anniversary of the Freedom Summer in Mississippi. “From the beginning I have noted that discussions of “freedom” and “citizenship” in our nation are too often narrowly constructed, leaving out the poor, black folks, immigrants,” she says. “Events in Ferguson over the last week express this fact more poignantly than I can bear.”

She believes that the lectionary message from Isaiah is particularly instructive. “I believe that clergy of all colors need to speak a word condemning the bloodshed on the ground and the suppression of truth-telling,” she says.

Even still, she is fully aware of just how difficult preaching in the face of such communal upheaval can be. “What’s happening flies in the face of everything I believe about human beings and justice,” she says. “I don’t even know where to start.” 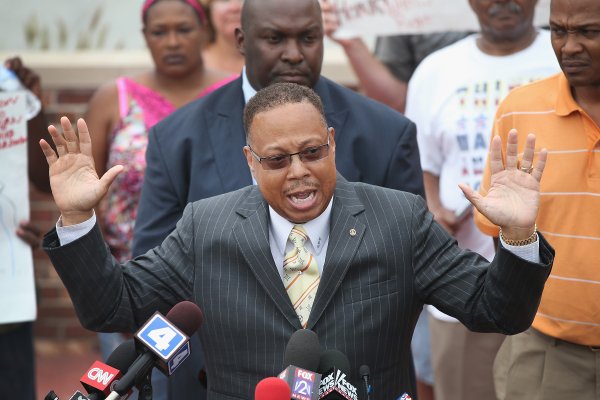