Koppenhaver, 32, was found in a hotel in Simi Valley, 30 miles outside downtown Los Angeles, where a hotel guest who witnessed the arrest told local media station KTLA that officers used a Taser on Koppenhaver. A second hotel guest said she called the police to the hotel after seeing a large man yelling at a petite woman who was trying to calm him down, grabbing her hair and pushing her.

Christy Mack, Koppenhaver’s ex-girlfriend and an actress in the adult entertainment industry, posted harrowing pictures on Twitter showing the injuries she said were dealt to her by Koppenhaver. They include broken bones around her eyes, a broken bone, missing teeth, a fractured rib and a ruptured liver, Mack said.

Mack said Koppenhaver returned to her home after their relationship ended in May, beat her friend who was with her at the time, then made her undress and shower in front of him before he assaulted her.

He has been charged with several counts of battery, including by strangulation, as well as assault with a deadly weapon, among other charges. 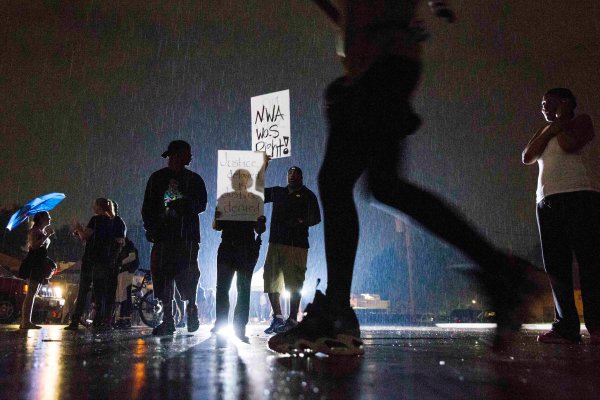 Ferguson Erupts Again After Spell of Calm
Next Up: Editor's Pick