Tensions flared anew on the main thoroughfare of Ferguson, Mo. early Saturday morning, after hundreds of protestors gathered for a day of raucous yet peaceful protests to demand justice for Michael Brown, the 18-year-old whose fatal shooting at the hands of a local police officer kindled riots earlier in the week between angry residents and an aggressive police force.

Police tried in vain to disperse a crowd of protesters who refused to clear West Florissant Avenue shortly after midnight, according to the St Louis Post-Dispatch. A lengthy standoff ensued. After protesters faced off with a line of police, small bands of people broke off from the crowd and looted a few stores along the street as other protesters sought to block them, the newspaper reported. Police held their line and cordoned off all entrances to the area by 2 a.m. as they repeatedly warned the crowd to go home or be subjected to arrest. A TIME reporter returning to the scene was prevented from accessing the area.

It was a marked departure from a few hours earlier. Until that point, it had been the second night in a row that the protests went off largely without incident. Under spitting rain, protestors gathered along the street toting signs, honking horns, playing music and shouting chants, mingling with uniformed police for stretches of the evening, a drastic departure from the clashes earlier this week.

The shift was spurred in large part by the appointment of a new officer in charge, Missouri State Highway Patrol Captain Ronald Johnson. After scores of residents criticized the paramilitary approach of local police, Johnson has adopted a conciliatory tack, abandoning the heavy weaponry and circulating through the crowds to discuss protesters’ concerns.

Amid the rage vented this week at what demonstrators say is rampant police brutality and profiling, it was striking to see a cop become a beloved figure. But Johnson strolled through the crowd like an A-list celebrity on the red carpet, high-fiving young men and obliging requests for selfies. The captain said that he hopes to turn tensions of the past week into a national example of how police can restore trust with an African-American-American community that says it is targeted by Ferguson’s nearly all-white police force.

Earlier in the day, fears rose that the Ferguson police department’s release of an incident report alleging Brown had been involved in a robbery prior to his shooting would rekindle the riots. But Brown’s family and attorneys pleaded for calm, and the crowd at first heeded the advice.

For much of the night, the demonstrations resembled an outdoor festival, with protesters drumming, dancing and singing as they sought shelter from the rain under a gas-pump overhang. Protesters ordered delivery pizza by the dozens, joined their kids as they scrawled on the sidewalk with colored chalk and organized booths for causes like voter registration.

Even celebrities materialized. Jesse Jackson held a vigil, and former NFL defensive back Demetrious Johnson, who grew up in inner-city St. Louis, chatted with local police. “I like the way it is going tonight, just like last night,” Johnson said. “Before, police were making the situation worse. They violated some [protesters’] civil rights and created chaos with their intimidation.” Johnson said he would be coordinating a clean-up at the gas station on Saturday with local high-school football players. “These kids want to be a part of something,” he said. “They want to make a difference.”

Like nights past, crowds spilled into the main street, dangling out of car windows with their hands in the air. Unlike most other nights, protesters smiled and laughed with each other–and for much of the evening, the police as well. But the late escalation was a reminder that this St. Louis suburb may be a powder keg for some time.

This story was updated to reflect events that occurred after it was published. 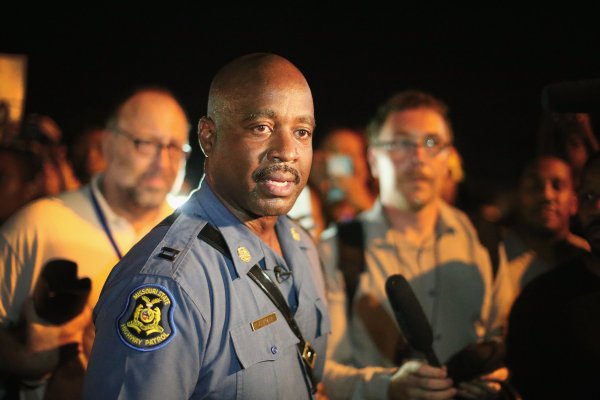 Meet Captain Ron Johnson, Star of the Ferguson Crisis
Next Up: Editor's Pick