Now that nearly every tech company, retail store and hardware chain has its own home automation platform, Samsung doesn’t want to be left out.

The electronics giant has acquired SmartThings, which makes smart home products and apps to control them. Samsung hasn’t disclosed the price, but Re/code claims the company paid roughly $200 million. SmartThings says it will remain an open platform and will operate independently within Samsung’s Open Innovation Center.

Here’s how SmartThings works: First, you buy a $99 hub that allows all your devices and appliances to connect. Then, you tack on whatever other home automation gear you want, such as power outlets, light switches, motion sensors and door locks. The hub then connects to your Internet router, allowing you to control everything via smartphone or tablet whether you’re home or away.

SmartThings got its start as a Kickstarter project in 2012, but over the last couple years, many larger companies have launched similar products with hubs that control an array of other devices. Lowe’s has a smart home system called Iris, while Home Depot has backed Wink, an offshoot of New York-based design shop Quirky. Staples has its own platform, called Connect, and Best Buy is reportedly backing a new effort called Peq.

But there isn’t a huge difference between each of these platforms, and right now the landscape is a bit messy. If you’re in the market for a home automation system, it’s tough to decide which one to pick. And there’s so much expensive, proprietary hardware on each platform that you could easily lock yourself into to one system that doesn’t end up being the best fit.

Perhaps that’s why other tech giants such as Google and Apple are moving more cautiously. Earlier this year, Google acquired Nest, whose only products are a smart thermostat and smoke detector. (Nest itself has since acquired Dropcam, a maker of video-monitoring cameras.) Apple hasn’t yet entered the hardware fray, but the next version of iOS will include HomeKit, a framework for controlling third-party devices. There’s been some speculation that Apple TV could serve as Apple’s hub for home automation in the future.

With that in mind, Samsung’s purchase is a head-scratcher at first glance. SmartThings isn’t much different from all the other systems on the market, and probably won’t get much love at retail, given that every chain now has its own preferred platform.

But Samsung may be able to stand out if it can tie in products from its home appliance business, such as ovens, refrigerators and dishwashers. Although Samsung has dabbled in connected appliances before, until now, it hasn’t had a complete platform that covers things like door locks and light sensors. With SmartThings, Samsung could be buying itself those basic elements. Use cases like “make sure the oven’s off when I leave the house” could be pretty compelling to homeowners, and it’s something other platforms won’t be able to do unless they start partnering with major appliance vendors. 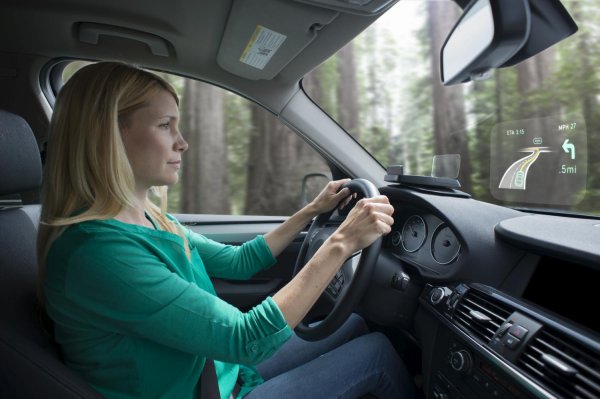 Navdy Projects Apps Onto Your Car's Windshield
Next Up: Editor's Pick