Eggless Eggs Exist and This Is What They Taste Like

The product’s logo says it all. It’s a silhouette of a tiny plant against the background of an egg shell, and it represents a revolutionary idea in food, questioning the land-laden, energy-heavy and labor-intensive way we grow so much of what we eat. It also represents the first time a company has created—and gotten to market—a food that acts like an egg and tastes like an egg, but comes from a Canadian yellow pea, not chickens.

Hampton Creek Foods launched its eggless mayonnaise just over eight months ago and its flagship product, Just Mayo, is already the leading mayo brand at Whole Foods Markets. In September, it will take over Walmart and Target shelves too and based on the growing interest in its products so far, the company expects to earn $35 million in sales this year.

During a recent visit to Hampton Creeks’ research facilities in San Francisco, in a warehouse between the city’s SOMA and Mission neighborhoods, I found the cramped space was a hub of activity. It was here that founder and CEO Josh Tetrick began his journey two and a half years ago to find a new way to make food—starting with the egg. With the help of biochemists, food scientists, data scientists and chefs, he is rethinking where our food comes from and how it’s grown. It’s not about replacing what we currently have, he says, but about making it better – more nutritious, and cheaper by about 30%.

On the day I’m there, dozens of people—from biochemists to data scientists to chefs—were busy fulfilling the next stages of the company’s mission. Tetrick says the company has already piloted eggless raw cookie dough as well as a liquid egg-like substance that can be used on French toast or even scrambled on their own. Now, they’re trying to cull from the world of plant proteins to develop alternatives to sugar or even fat.

So how does it taste? The mayo is indistinguishable from regular mayo. So much so that celebrity chef Andrew Zimmern is a fan: in a blind taste test, he preferred the richness of Just Mayo to Hellmann’s. The cookies are moist and crumbly, and even the raw cookie dough pretty faithfully replicates the taste of a traditional batter—but without, as Tetrick points out, the risk of salmonella poisoning or the burden on the environment that comes with raising hundreds of thousands of poultry.

That’s why companies like Walmart, Target, Kroger, Safeway, Ralph’s, Shoprite and Costco are signing deals to carry the company’s mayonnaise. From the beginning, Tetrick says, Just Mayo was not meant to be a boutique brand aimed at the 1% who can afford to worry about the environment. Case in point: Just Mayo will also be at the Dollar Tree. That every-man mentality, which means the eggless egg could also help to alleviate hunger around the world as an important and cheaper form of protein, has also attracted some of the company’s biggest-name investors, including Bill Gates, Yahoo co-founder Jerry Yang, financier Tom Steyers and Chinese entrepreneur Li Ka-Shing.

But before that can happen, Hampton Creek’s chefs and chemists are trying to tackle their biggest challenge yet — scrambled eggs. For the 30% of products like muffins, cookies and mayo in which eggs are just an ingredient and not the star of the show, their product has exceeded expectations. But when it comes to throwing the yellow-pea “egg” into a pan…that’s been a challenge that’s stumped — and continues to stump — the team. To move things along, Tetrick recently hired Trevor Niekowal from Chicago’s trendy Moto restaurant, and Niekowal is eager to show me the latest version of their scramble-ready egg. He starts by whipping up some French toast using Wonder bread. It tastes indistinguishable from the real thing, with the right crispiness that comes from a sautéed-egg coating.

He admits, though, that heating the product on its own is still a work in progress. Back in April, the culinary team, which includes other Moto alums Chris Jones, a former Top Chef contestant and pastry chef Ben Roche, eagerly poured the product into the pan, only to watch the liquid evaporate into nothing. The next version, beefed up with stronger chemical bonds, stayed together a little too well, forming a flat crepe that didn’t have any of the fluffiness of an egg.

For my taste test, Niekowal pours some of the egg mixture into a skillet and it looks no different than something cracked out of a shell and whipped into a slightly runny yellow liquid. It hits the pan with a slight sizzle and stays a little runny before fluffing up and rolling once it’s been heated. The taste, however, still needs some work. The eggless eggs I ate at Hampton Creek tasted like, well, tofu. ‘We’ll tell that to our food scientists,” says Niekowal.

The Sky’s the Limit

And they’ll likely get it just right eventually. In fact, Tetrick is so confident of that that he’s looking even beyond the eggless egg and making even bigger plans to re-make food. He recently hired Dan Zigmond, responsible for managing data for Google Maps and YouTube, to make the company’s plant-based database even more nimble and productive. “We built this company around the idea that there are 400,000 plant species in the world,” says Tetrick. “Remarkably, 92% of them haven’t been explored for how to make food.”

And so Tetrick and his team are painstakingly annotating as much of that database as possible, with valuable information such as the proteins’ weight, their molecular properties—does it form gels? what happens when it’s heated?—and where they are grown. In order to qualify for Hampton Creek consideration, the plant can’t be a premium crop or one that requires excessive or unusual conditions to grow. That wouldn’t help to make the food a less expensive option than what we currently eat. “For the first year and a half of the company, there was a lot of grinding out information about the proteins, lots of trial and error before we started seeing things,” says Tetrick.

But the database is starting to bear fruit — the team is perfecting a super-food high in protein that could potentially address malnutrition in developing nations, as well as looking for healthier ways to sweeten foods. “The world is so addicted to soy and corn, it’s almost like we forgot about the abundance and complexity of the natural world,” he adds. “I think that’s unfortunate.” There’s a big world of plant proteins out there just waiting to be mined for taste, nutrition and health benefits. And for now at least, there’s always the eggless egg. 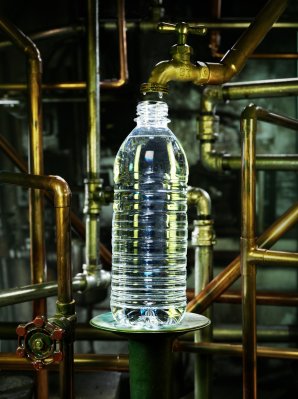 Why Your Bottled Water Contains Four Different Ingredients
Next Up: Editor's Pick