Capt. Ronald Johnson of the Missouri State Highway Patrol, who was appointed by the governor to take control of security operations in the city of Ferguson, walks among demonstrators gathered along West Florissant Avenue on August 14, 2014 in Ferguson, Missouri.
Scott Olson—Getty Images
By Charlotte Alter

Years before he arrived in Ferguson, Mo. to defuse the violence following the killing of unarmed black teen Michael Brown, Missouri State Highway Patrol Captain Ronald S. Johnson ran over a mailbox with his car.

He was sixteen and had only just gotten his driver’s license, his mother Annie Johnson says, and he was rushing home to meet his midnight curfew. “He came into the house and woke us up, and he said ‘Mom, Dad, I got something to tell you,'” she said. “‘I was driving, and I knocked this man’s mailbox over. But I got out and I left a note in the guy’s mailbox. It said ‘I am sorry I knocked over your mailbox, but I will be back in the morning to fix it.'” The note also included his name, his father’s name, his address and phone number. When Johnson and his dad arrived the next day to fix the mailbox, the homeowner was so impressed that he helped them put it back together, and refused any money for the damages.

That’s why Annie Johnson, 72, isn’t surprised that her son has been able to help reduce the tension in Ferguson, at least at first. “Ron wants peace,” she said. “And he’s for right. He’s always been, from a child up.”

Ronald S. Johnson, 51, was born in St. Louis to a father who worked in campus security for St. Louis University, and a mother who worked as a chemical receiving clerk. His mother says he wanted to be a police officer almost as soon as he learned to read. He joined the Highway Patrol in 1987, shortly after graduating from college, and was quickly promoted through the ranks before becoming a Captain in 2002. He lives in Florissant, Mo., near Ferguson, with his wife and two children, both in their 20s.

Violence mounted in the days following Michael Brown’s killing on Aug 9th, as police in riot gear arrested journalists and fired rubber bullets into crowds of protestors. Police had said that Brown was reaching for the officer’s gun, but at least one eyewitness disputed that account, fueling further mistrust of law enforcement as they tried to manage the situation. Ferguson Police Chief Tom Jackson revealed Friday that the officer who shot Brown was named Darren Wilson, who was responding to a sick call in the area. After Missouri Gov. Jay Nixon pulled St. Louis County Police out of Ferguson and replaced them with Missouri State Highway Patrol on Thursday, led by Captain Johnson, the tensions seems to have cooled.

Captain Johnson’s mother isn’t the only one who thinks he’s got the right attitude. Former colleagues had only good things to say about man who made headlines by marching with Ferguson protestors Thursday night.

St. Louis Police Chief Sam Dotson knows Captain Johnson from working with him whenever the Highway Patrol sends support to St. Louis for a large event, like an all-star game or a presidential motorcade. “He’s a quiet guy, but he is professional,” Chief Dotson says. “When he speaks, people listen. When he acts, people respond to it.” “I thought he was the perfect pick [for Ferguson,]” he says. “He’s familiar with the area, he comes from the area, and he connects with the community.”

The unrest in Ferguson has led to a national discussion about how young men of color are treated by the criminal justice system. And while it’s not yet clear how Captain Johnson will manage the civil discontent around the killing with the ongoing investigation into Brown’s death, his presence seems to have soothed tensions.

“I think he’s a calming influence on people,” said former Missouri State Highway Patrol Superintendent Colonel Roger Stottlemyer, who promoted Johnson to Captain in 2002. “I think he knows the people there, he knows what their concerns are, he can relate to them having come from that community.” Although he didn’t have exact numbers, Stottlemyer said that at the time Johnson was rising in the ranks, there were fewer than 100 officers of color in a force of 1,200 officers. “He was a star, and it was obvious from the beginning.”

Stottlemyer said he promoted Johnson to Captain partly because he was impressed with his leadership style. “I observed when he was a corporal and a sergeant, the way he handled his men and the way he handled issues that comes up,” he said. “He communicates well with his people. He was an officer that you didn’t have complaints about.”

While his former colleagues seem happy with Johnson’s role in Ferguson, his mother is a little more conflicted. “I’m very proud of him, but I have my concerns,” she said. “I don’t want anything to happen to him because he’s doing that. I don’t want him to get hurt.”

Correction: This piece originally misstated Johnson’s age. He is 51. 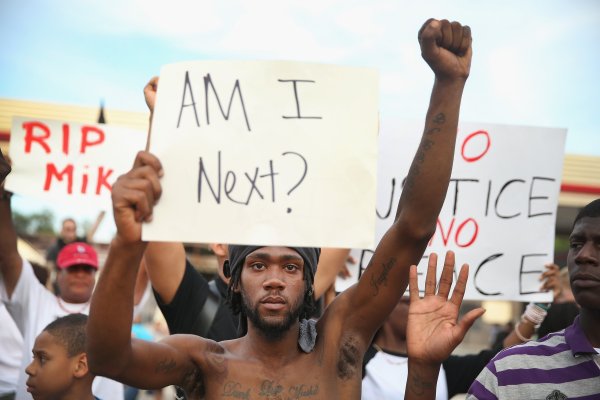 Ferguson Cops Tell Their Side of the Story
Next Up: Editor's Pick