The past month has not been an easy one for left-leaning organizations in Israel. A July poll by the Israel Democracy Institute (IDI), a non-partisan Israeli think-tank, found that 95% of Israelis believed Operation Protective Edge was justly launched. More than two weeks into the fighting support remained unwavering.

Inside the country, only a few groups have been vocal in their condemnation of the conflict between Israel and Hamas, the Palestinian militant group. The Association for Civil Rights in Israel, Physicians for Human Rights-Israel and Adalah are all notable examples. But perhaps the loudest has been human rights group B’Tselem. Founded in 1989, it’s been persistent in its criticism of the Gaza conflict.

Running across its homepage are the names of all children killed in the recent Gaza war. B’Tselem had hoped to broadcast this list on Israeli radio but the clip was blocked by the Israeli Broadcast Authority (IBA), which said the advert’s content was “politically controversial.” On Thursday, Israeli newspaper Haaretz reported that Israel’s Supreme Court had overturned B’Tselem’s appeal against IBA’s decision.

That added to what has been a difficult month for the non-governmental organization. Hagai El-Ad, B’Tselem’s director, told TIME: “The last month has been unprecedented… We received death threats, people told the police we should be accused of treason, we faced attempts of physical violence.” After repeatedly filing complaints to the police, El-Ad says B’Tselem was forced to hire its own security.

B’Tselem’s situation worsened last week after the National Civilian Service removed the group from Israel’s national service volunteer list, though this decision was put on hold on Sunday pending an investigation. If upheld, it would mean that those eligible to opt for national service over military conscription won’t be able to work for the organization.

Sar-Shalom Jerbi, the National Civilian Service’s administration director, said the original decision was made because B’Tselem “crossed the line in wartime [by] campaigning and inciting against the state of Israel and the Israel Defense Forces, which is the most moral of armies.”

Despite this backdrop, groups like B’Tselem are unlikely to be silenced. Abraham Bell, Professor of Law at Bar-Ilan University in Israel, and Goldenblatt are united in agreement that the left is usually critical of the government over incursions into Gaza, even if that’s an unpopular stance to take at the time.

Although strongly critical of Israel during the war, B’Tselem has also condemned the role Hamas has played in the conflict. A statement on its website contains the line in bold: “Hamas did, indeed, violate international humanitarian law during the fighting.” Though this sentiment is undoubtedly shared by its detractors, they might not agree with B’Tselem’s succeeding paragraph which begins: “However, Israel is wrong in shirking responsibility for the consequences of its actions and in laying them at Hamas’ door.”

Yariv Oppenheimer, the general director of Peace Now, another NGO which was founded in 1978 and campaigns for a two-state solution to the Israel-Palestine conflict, is also critical of Hamas, telling TIME: “We think that Hamas is not a partner for peace… [it’s] a terrorist organization, officially it doesn’t recognize the right of Israel to exist.” Oppenheimer adds however that “Israel should not just criticize Hamas but speak to other Palestinian groups like the Palestinian Authority… We should say to our neighbors that people who come with peace will be able to reach an agreement with us.”

Though B’Tselem might be perceived as unduly critical of the government, it hasn’t gone unheard. “We’ve seen a surge in public interest in B’Tselem’s work and public statements,” El-Ad says, though he adds: “I understand that many people are upset with our statements and interest doesn’t equal support.”

The same can’t be said for Peace Now. The group has declined in the decades since its founding. Unlike B’Tselem, Peace Now has been fairly quiet on the current conflict. “I admit that in the last few weeks it was very difficult to have a clear position on [Israel’s] right to respond [in Gaza],” Oppenheimer says. He adds however that the group held a protest against the war in Tel Aviv on Saturday that attracted over 10,000 people by his estimate.

For Oppenheimer, a shift in public mood is to blame for their dwindling support. “In the past people were much more optimistic and romantic about the idea of peace,” he says. “People in Israel have suffered a lot of disappointment over the last decade.”

Though Bell agrees people are disappointed he blames the left-wing organizations for their own failure. “Groups like Peace Now, they managed to implement the major parts of their platform and it didn’t go as expected,” he says.

Left-wing groups originally pushed for negotiations with the Palestinian leadership to achieve territorial compromises, Bell explains, and then hopefully a lasting peace deal. When talks failed, the leftist groups called for unilateral withdrawal from Gaza, which also failed to bring peace. “It’s not clear to Israelis that accommodation or unilateral withdrawal will bring peace or international support,” says Bell. In the IDI’s latest peace poll just 3.2% of Israelis believe negotiations between Israel and the Palestinian Authority, which is based in the West Bank, will lead to future peace.

B’Tselem’s El-Ad suggests such views are partly the result of the government’s stance. “There has been a huge effort by the political leadership to sell to the public that there’s no partner for a politically agreed solution,” he says. “The strategy that’s being pitched is the only way to deal with Gaza is force.”

Bell, however, is not convinced. “It’s very hard in Israel to control the public opinion from a governmental position,” he notes. “I think the [government’s] rhetoric is the result, not the cause [of people’s loss of faith].” Nevertheless Bell doesn’t think this is the end of Israel’s left. “I don’t think [these groups] are ever going to truly disappear, I think that people are naturally optimistic.” 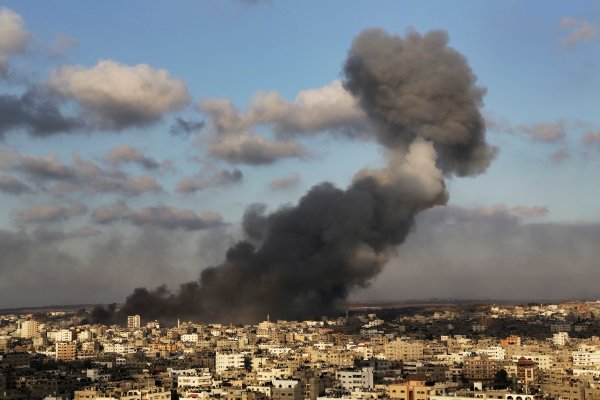 As Israel Fights Hamas in Gaza, Egypt Plays the Peacemaker Once Again
Next Up: Editor's Pick