Woman sitting on Villingili beach, working with a notebook and mobile phone, surfing in the internet. The island is owned by the luxurious Shangri-La's Villingili Resort and Spa Hotel on September 27, 2009 in Male, Maldives.
EyesWideOpen--Getty Images
By Megan Gibson

Picture your dream vacation. It probably doesn’t include desperately searching for an available wi-fi signal so you can check your work emails, does it? Yet these days, going away on vacation doesn’t usually mean leaving the office behind. Many people often find themselves tapping away on their smartphones, either in an attempt to field urgent questions, or to avoid the dreaded scenario of going back to work to hundreds of unread emails. Either way, many of us end up working when we’re supposed to be getting away from it all.

This is no longer a problem for employees at the German company Daimler. The car and truck maker has implemented a new program that allows employees to set their email software to automatically delete incoming emails while they are on vacation. When an email is sent, the program, which is called “Mail on Holiday,” issues a reply to the sender that the person is out of the office and that the email will be deleted, while also offering the contact information of another employee for pressing matters.

“The idea behind it is to give people break and let them rest,” says Daimler spokesman Oliver Wihofszki. “Then they can come back to work with a fresh spirit.” Not to mention, an empty inbox.

Unsurprisingly, the program — which is optional — has gone down well with the company’s German employees, about 100,000 of which have company email addresses, according to Wihofszki. He says that although the company hasn’t done any polling as to whether the service is popular, anecdotal feedback has been positive. “A colleague used it a few weeks ago and she loved it.”

Though it might seem radical, Daimler’s program fits into a wider phenomenon that’s spreading across Germany and other parts of Europe. Volkswagen and Deutsche Telekom, for example, have made efforts to stop emailing their staff during the evenings. Germany’s Labor Ministry has started encouraging managers to stop emailing or contacting employees outside of working hours by implementing a practice within its own ministry so that no one “who is reachable through mobile access and a mobile phone is obliged to use these outside of individual working hours.”

And then there’s France, which earlier this year was the source of many incredulous news headlines for its stance on post-6 pm work emails. No, despite what the headlines said, France didn’t “ban” work emails after hours. But a federation of employers and two unions of workers did form an agreement to allow employees the right to completely disconnect from their work for a set number of hours a day.

It might be easy to dismiss German and French companies embracing limits on work email as a typical European view of work, along with shorter work weeks and longer stretches of paid vacation time. But it’s not as if worker productivity in either country is pitiable. In fact, according to figures from the OECD, German and French productivity is among some of the highest in Europe and not all that far behind productivity in the U.S.

But while this sounds all well and good and oh so European for French and German workers, is a limit on out of the office work email something that U.S. businesses should try to adopt?

After all, Americans definitely deal with their share of work email. A poll conducted by Right Management, more than half of the respondents said that they’d been sent work emails by their managers or bosses in the evenings, weekends or while on vacation.

“The boundaries of the workplace are expanding and now reach deeper into employees’ lives, especially now that mobile technology is taken for granted,” said Monika Morrow, the senior vice president of career management at Right Management. “Many find they can no longer just leave the office at the office, and instead will get emails or calls while commuting or shopping, or even sitting down to dinner.” Morrow also asks, “this a convenience or an imposition?”

Whether people view after hours work emails an imposition or not, many do report that spending a lot of time checking emails does impact their stress levels. From a recent Gallup poll:

Yet, despite the polls and examples set by the Europeans, there doesn’t seem to be much groundswell support for implementing limits on after hours work email in the U.S. So, sadly, it doesn’t look like Americans are going to be getting any reprieve from the late-night emails or Sunday afternoon memos. Let’s hope, however, that some people can take some inspiration from the Germans and maybe, just maybe, stop checking their inbox while on vacation. 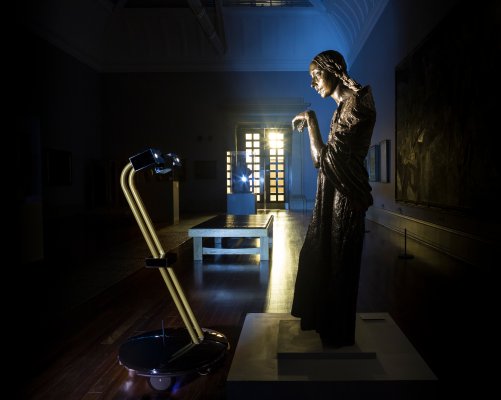 Remote-Controlled Robots Let You Explore Tate Britain at Night Without Leaving Home
Next Up: Editor's Pick