Chuck Todd to Take Over Meet the Press

Chuck Todd, who will leave MSNBC's Daily Rundown to take over Meet the Press
Charles Ommanney/MSNBC
By James Poniewozik

On Thursday, NBC announced a major transition in its Sunday-morning news strategy: from a guy without facial hair to a guy with facial hair. As had been rumored for weeks, NBC is ditching David Gregory as host of Meet the Press, which he has moderated since 2008, in favor of White House correspondent Chuck Todd.

Todd will give up the White House post, as well as his MSNBC show Daily Rundown, which may insulate him from charges of association with MSNBC’s left-leaning hosts. Gregory, who has taken blame for a decline in ratings, will leave the network altogether–indeed, he was all but dropped through a trap door, departing immediately in favor of Todd, who takes over September 7.

How big a deal this is to you depends in part on how big a deal the Sunday shows remain to you. (Disclosure: I watch television for a living, am deeply into news, politics and government, and I watch them only when forced.) One explanation for NBC’s ratings drop was Gregory’s less-than-energetic style; the chipper, data-driven Todd should bring a change in tone, and NBC says it plans to make to-be-determined changes under Todd.

But I don’t think Gregory was ever MTP‘s real problem. And there’s no sign, with this hire, that the show intends to change its inside-Washington focus on who’s up and who’s down and how it all affects an election cycle that never ends.

Todd, who remains NBC’s political director, is sharp, eager and routinely praised as a “politics junkie.” But it’s worth considering that that phrase does not mean the same thing as “policy junkie.” And in the world of Sunday-morning TV, the former is the kind of junkie you want to be if you want to get ahead: you need to be mainlining poll results and campaign positioning and 2016 speculation–the stuff of who gets in power and how, not of why anyone would want them to be there and what works and doesn’t in government. The latter affects all Americans, a lot, and the Sunday shows are now generally built on the assumption that they don’t care about it.

All of which to say is, Chuck Todd will probably be just fine, maybe even very good, as host of Meet the Press. He’s engaged, quick-witted and always seems to have done his homework plus the extra credit. When you want to break down the currents and political map of an election, Todd’s one of your best guys. But Meet the Press, it seems, will continues to be what Meet the Press has become: rounds of interviews with leaders the major parties have offered up (i.e., John McCain), framed as a discussion of who won and lost the week. 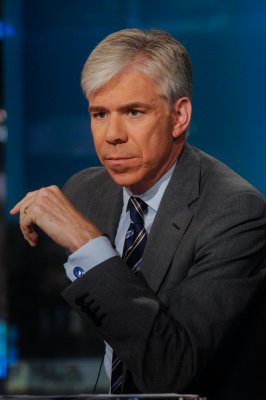 David Gregory to Leave NBC's Meet the Press
Next Up: Editor's Pick