Getting Sick From Planes Is Way Less Likely Than You Think

The person next to you on your eight-hour flight is clearly not feeling well—coughing, running to the lavatory frequently. Great, you think. I’m going to catch some horrible virus.

Actually, probably not. Although most of us would swear that we caught a flu as the result of air travel, airliners are not great at spreading infectious diseases among passengers. (Bacteria is another story, though. See the 6 Germiest Places on a Plane for what to be careful about.) According to a Centers for Disease Control and Prevention (CDC) investigation, if a suspected tuberculosis carrier was aboard a jet, the agency wouldn’t expect exposure to possible infection to extend beyond two rows in either direction.

Airliners are, however, very good at delivering infectious diseases to entire countries. The SARS breakout in Canada in 2003, which sickened 400 people and killed 44, was traced to a single airline passenger—the index patient—who traveled from Hong Kong to Toronto and fell ill after she arrived home. Most of the cases were hospital-acquired, however, including healthcare workers themselves. SARS seemed to have skipped the airline passengers altogether.

Likewise, the chance of catching Ebola from a fellow passenger is remote. The virus is spread through direct contact with infected bodily fluids, not by sitting in a middle seat. “The one thing we have as an advantage is the lack of airborne transmissibility,” says Dr. David R. Shlim, president the International Society of Travel Medicine. “It’s not likely to get in an airplane and then float down the aisle.”

The World Health Organization, which plays traffic cop to the planet’s disease vectors, has warned reasonably for travel restrictions for anyone suspected of having Ebola. Airport and health authorities in Lagos and Monrovia are screening passengers for symptoms before they board and anyone stricken with such symptoms is unlikely to be able to travel, although it’s certainly not impossible. In the U.S., the CDC mans quarantine stations at international airports, such as John F. Kennedy in New York City and Newark Liberty in New Jersey, that act as the front-line defense against infectious visitors.

The bigger issue is that a virulent illness—SARS, MERS, and perhaps some superbug lurking somewhere waiting for a ticket out—can be delivered around the globe with relative ease given the expansion in air travel. A million passengers a day enter the United States, according to the Customs and Border Protection agency. “Diseases that used to smolder can now move more quickly. You can get anywhere in 24 hours,” says Shlim. “All the public health officials know about that and are concerned about it.” Consider chikungunya, a mosquito-borne virus that causes fever and joint pain. According to the CDC, the chikungunya virus reached the Americas via the islands of the Caribbean in late 2013. “There is a risk that the virus will be imported to new areas by infected travelers,” the CDC notes. Sure enough, a case was discovered in Florida this year.

The WHO hasn’t gone so far as recommending a travel embargo to the Ebola-affected nations, but that would be the logical progression if the outbreak can’t be reined in with the current program, called Ebola Virus Disease Outbreak Response Plan. During Canada’s SARS outbreak, the WHO issued a travel advisory that recommended that tourists avoid the Toronto area. It’s not known whether the advisory stopped SARS from spreading, but it did severely damage Canada’s tourism industry before being withdrawn after a few days after the Canadian government protested the advisory.

Stopping the movement of people is the ultimate way of keeping a viral disease in check geographically. But in the more connected world of global logistics it will be increasingly difficult to do so. Although ebola is terrifying in that there is no widely available remedy, there’s no reason to change your flight plans, even to Africa.

That doesn’t mean people won’t. “I can’t think of any example of one person got on a plane and 30 people got off sick,” Shlim notes. The biggest concern on your next jet ride isn’t going to be Ebola. It’s more like measles, which is very contagious. The risk there isn’t from a third-world passenger arriving from Africa. It’s more likely a 7-year American kid who hasn’t been vaccinated. 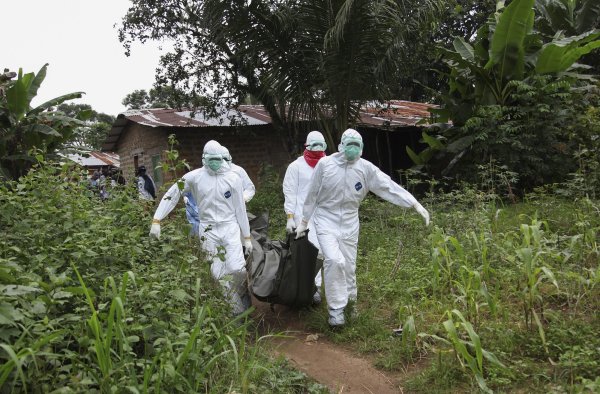 WHO: More Than 1,000 Killed in Ebola Outbreak
Next Up: Editor's Pick