Obama: 'No Excuse' for Ferguson Violence

President Barack Obama said Thursday there is “no excuse” for violence against police or protestors in Ferguson, Mo., where intense clashes have broken out following the shooting death by police of unarmed teenager Michael Brown.

In his first public statement on the death and subsequent violence, Obama appealed for justice and calm, calling on all sides to deescalate a tense situation that has embroiled the town in violence for five days. “I know that many Americans have been deeply disturbed by the images that we’ve seen in the heartland of our country,” Obama said.

Earlier this week, Obama tasked Attorney General Eric Holder and the Department of Justice to begin an independent investigation of Brown’s death. “I made clear to the Attorney General that we should do what is necessary to help determine exactly what happened and to see that justice is done,” Obama said. He was briefed by Holder on Thursday morning on the status of the investigation.

Obama faulted local police for their secrecy surrounding the shooting, as well as the excessive violence used against peaceful protestors. “When something like this happens, the local authorities, including the police, have a responsibility to be open and transparent about how they are investigating that death and how they are protecting the people in their communities,” Obama said. “There is never an excuse for violence against police or for those who would use this tragedy as a cover for vandalism or looting. There’s also no excuse for police to use excessive force against peaceful protests or to throw protesters in jail for lawfully exercising their First Amendment rights.”

Holder echoed Obama’s remarks in a statement of his own later Thursday, saying he was “deeply concerned” at the deployment of military equipment and vehicles on the streets of Ferguson. He said local authorities had accepted an offer of “technical assistance” by the Justice Department to “help conduct crowd control and maintain public safety without relying on unnecessarily extreme displays of force.”

Obama also made reference to the brief arrest of two reporters in Ferguson on Wednesday night by police that became wall-to-wall news nationwide. “Here in the United States of America, police should not be bullying or arresting journalists who are just trying to do their jobs and report to the American people on what they see on the ground,”

Obama said he spoke with Missouri Gov. Jay Nixon on Thursday before addressing reporters, calling the governor “a good man and a fine governor.” 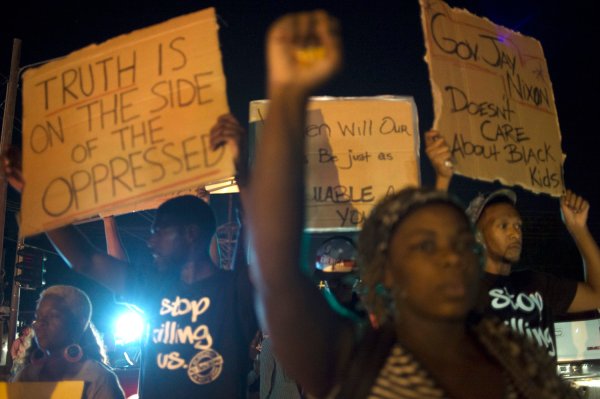 Why Ferguson Was Ready to Explode
Next Up: Editor's Pick