Why Ferguson Was Ready to Explode

After several days of violent protests and intense confrontations between local police and protestors, the police decided to pull back and allow the protestors to march peacefully and protest, Ferguson, Mo., Aug. 14, 2014.
Jon Lowenstein—Noor for TIME
By Gerald Early

The late Tom Eagleton, longtime Democrat Senator from Missouri, in speaking to a group of NFL owners some years ago referred to St. Louis as “a raucous Des Moines,” despite its Southern pedigree (St. Louis had slavery); its role as portal to the American West (St. Louis proudly calls itself “the gateway city”); and its reputation of being more refined and “eastern” than its bigger western sister, Kansas City. Perhaps St. Louis, in its heart, is something of a mid-sized, Midwestern burg, a bigger, more lively, and urban version of Sinclair Lewis’s Main Street. St. Louis has always thought itself as current in a benign way, hardly avant-garde, but a charming, if declining, metropolis with a glorious past, when, in the 19th Century, the nation ran through this city.

It’s a past that is ever receding in history’s rearview mirror. Race relations here have been managed on the seemingly civil principle of slouching away from the worst, most benighted, aspects of the past in tolerable increments that comfort the white establishment and infuriate white liberals and leftists. There was no riot here during the 1960s, when they were almost a radical rite of passage for American cities. Some might even think that St. Louis was ahead of other cities in the political progress African Americans made here in the 1960s under Bill Clay, Percy Greene, and the Congress of Racial Equality.

Then comes the 21st Century and the age of Obama, and a policeman shoots an unarmed African American teenager in the African American, lower middle class suburb of Ferguson, and the pent-up racial fury of decades breaks loose. Is St. Louis now the canary in the mine, a harbinger, or was it always behind the curve?

These interlocking networks of fragmentation that characterize the St. Louis, frequently deplored but diligently maintained, have managed to keep African Americans here contrarily concentrated and diffuse, politically empowered (there have been African American mayors, police chiefs, etc.) but also politically contained, and, in many respects, isolated from the cultural and political currents of the region. There remains in St. Louis a sense that African Americans are strangers in a strange land. The region is what sociologists call “hyper-segregated.”

Enter this iron triangle of control, neglect and racial alienation, and one uncovers several recent racial narratives that should have warned St. Louisans about what was coming—narratives about crossing the racial divide here. Metrolink, St. Louis’s light rail system, completed its second line in 2006. It provided African Americans of East St. Louis, one of the poorest cities in the country, and of north St. Louis county much easier access to the St. Louis Galleria Mall and the central cultural corridor of the city, including the hip Delmar Loop district. Concurrently, the Galleria has since seen an astronomical increase in shoplifting, and there has also been an increase in general crime and hooliganism in the Delmar Loop. This has led many to think that the Metrolink, as it has crossed racial boundaries, has enabled African American teenaged crime. This vicious cycle of young African Americans’ antisocial hostility and acting out, hardly unique to African Americans or even to Americans, and ever increasing white fear and barricade building, have intensified racial tensions, as people find the problem intractable and increasingly impossible to discuss honestly. The current riot in Ferguson is largely a war between police and the young African Americans who think cops exist mostly to prevent African American from harming whites.

Another cautionary signal: In February 2008, Charles Lee “Cookie” Thornton, a lifelong African American resident of the suburb of Kirkwood, murdered Kirkwood’s mayor (who died several months later), a police sergeant, a mayoral candidate and two other citizens at a city council meeting, an act that must rate among the most horrendous political assassinations in American history. Thornton was killed by police. He was clearly deranged, but what drove him crazy was his sense of betrayal at the hands of white Kirkwood. Thornton had grown up in the all-African American Meachum Park area of Kirkwood, was a rabid supporter of Kirkwood’s 1991 annexation of Meachum Park, and was, if anything, for a time, an emblem of crossing St. Louis’s racial divide.

Many of Thornton’s demons were imaginary. Yet his unhappiness, his disappointment that the racial divide within the suburbs was impossible to transcend is felt by many African American. So, Thornton, in his brother’s words, “went to war.” And so has, it now seems, a portion of African American St. Louis, triggered by a particular outrage, but largely an expression of rage against a particular set of enduring arrangements. Perhaps the problem with race relations is that the more things change, the more they remain the same. 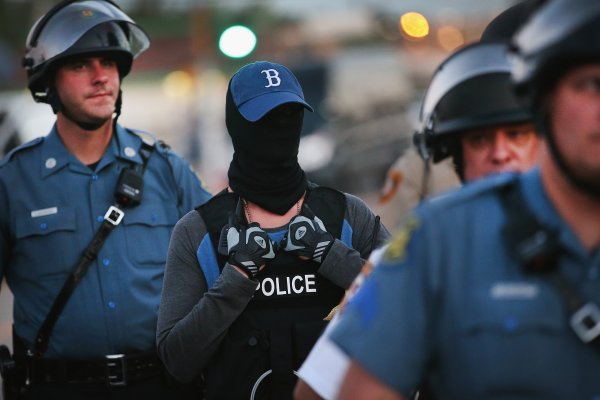