St. Louis County police will turn over responsibility for security in Ferguson to the state highway patrol, Missouri Gov. Jay Nixon announced Thursday, in a law enforcement shift for a town where anger over the police shooting of an unarmed black teenager has sparked violent protests.

In a press conference after days of clashes between police and protestors, Nixon said the Missouri Highway Patrol will be the lead force securing the city. “Today is the day that we renew our commitment to bring peace to the families of Ferguson,” he said. “Operationally the patrol will be the lead agency when it comes to security.”

The plan, he said, would be “to move forward people and to move back a little equipment”

The announcement was first revealed by Missouri Democratic Rep. William Lacy Clay, who spoke to Nixon earlier Thursday. Clay’s office confirmed a Bloomberg report that Nixon told Clay he would be pulling the county police force from the town.

Highway Patrol Capt. Ron Johnson, an area resident who will lead the police effort, promised a more respectful environment Thursday. “I understand the anger and fear that the citizens of Ferguson are feeling and our officers with respect both of those,” he said.

At the press conference, Nixon said he hoped that police would present a “softer front” on Thursday night. The town has “looked a little bit more like a war zone, and it’s not acceptable,” he said. On Thursday, Attorney General Eric Holder announced that local forces had accepted Department of Justice resources to help defuse the situation.

The move comes with the heavily equipped police force coming under growing scrutiny under scrutiny for its tactics, which have included the use of tear gas, stun grenades, and smoke bombs. At least 40 people have been arrested since protests broke out after the shooting death of Michael Brown on Saturday, including two journalists on Wednesday who were temporarily detained.

Brown, 18, was shot dead on Saturday, prompting the racially charged demonstrations in the majority black suburb of St. Louis, where the police force is nearly all white. Authorities say Brown was shot in a struggle for an officer’s gun, but some witnesses have said Brown had his hands in the air. Ferguson Police Chief Thomas Jackson told reporters Wednesday that the officer who shot Brown had been struck in the cheek during the incident and taken to hospital.

President Barack Obama also addressed the situation Thursday afternoon, saying there was “no excuse” for violence against police or protestors. But at least one lawmaker called for him to take forceful action. “President Obama should use authority of his office to declare martial law,” Georgia Democratic Rep. John Lewis said on MSNBC.

Authorities have so far refused to identify the officer involved in the shooting death of Brown, citing the officer’s safety. But the decision has fueled anger among the demonstrators. On Wednesday, St. Louis County Prosecuting Attorney Robert McCulloch told the St. Louis Post Dispatch that details from the investigation would not emerge for weeks. 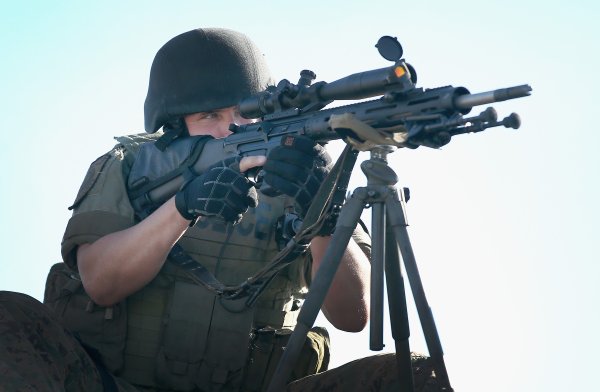 Why Ferguson Looks So Much Like Iraq
Next Up: Editor's Pick