Michael Brown, an unarmed 18-year-old, shot to death in Ferguson, Missouri, by police. Eric Garner, a 43-year-old New Yorker, dies from a police chokehold. John Crawford III, 22, shot and killed by police in a Walmart outside of Dayton, Ohio.

Enough is enough. Each of these incidents has an unmistakable racial dimension—all of the victims were black and all or most of arresting officers were white–that threatens the always tense relationships between law enforcement and African Americans. As important, the circumstances of each death are hotly contested, with the police telling one story and witnesses (if any) offering up very different narratives.

Brown’s death in particular is raising major ongoing protests precisely because, contrary to police accounts, witnesses claim that he had his hands up in the air in surrender when he was shot. The result is less trust in police, a situation that raises tensions across the board.

While there is no simple fix to race relations in any part of American life, there is an obvious way to reduce violent law enforcement confrontations while also building trust in cops: Police should be required to use wearable cameras and record their interactions with citizens. These cameras—various models are already on the market—are small and unobtrusive and include safeguards against subsequent manipulation of any recordings.

“Everyone behaves better when they’re on video,” Steve Ward, the president of Vievu, a company that makes wearable gear, told ReasonTV earlier this year. Given that many departments already employ dashboard cameras in police cruisers, this would be a shift in degree, not kind.

“Dash cams only capture about 5% of what a cop does. And I wanted to catch 100% of what a cop does,” explains Ward, who speaks from experience. He used to be a Seattle police officer and his company’s slogan is “Made for cops by cops. Prove the truth.”

According to a year-long study of the Rialto, Calif., police department, the use of “officer worn cameras reduced the rate of use-of-force incidents by 59 percent” and “utilization of the cameras led to an 87.5 percent reduction in complaints” by citizens against cops.

Such results are the reason that the ACLU is in favor of “police body-mounted cameras,” as long as various privacy protections and other concerns are addressed. And it also explains growing support for the policy among elected officials. In the wake of Eric Garner’s chokehold death in July, New York City’s public advocate is pushing a $5 million pilot program in the city’s “most crime-plagued neighborhoods” as a means of restoring trust in the police.

Since 1991, when the beating of Rodney King by the Los Angeles Police Department was captured on tape by an amateur videographer, small, cheap recording devices have become a ubiquitous and effective means by which citizens are able to watch the watchers. In some cases, crowd-sourced footage exonerates the police, while in others it undermines the official narrative.

Over the same period, as the Washington Post’s Radley Balko has documented in Rise of the Warrior Cop, even small-town police departments have become “militarized” in terms of the training they received and the hardware they carry. When the results aren’t tragic, they increase tensions between police and the people they serve and protect.

Mandating that cops wear cameras wouldn’t prevent all tragedies from happening but they would certainly make deaths like those of Brown, Garner and Ferguson less likely. And in difficult cases, body cams would help provide crucial perspective that would build trust in law enforcement across the board. 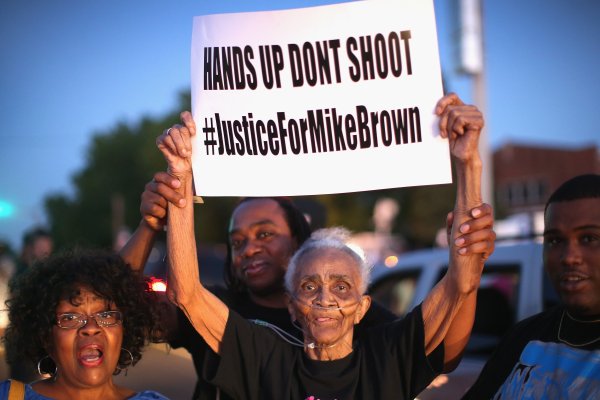 White Flight and White Power in St. Louis
Next Up: Editor's Pick