We Must Treat ISIS Like a State to Defeat It

The international community does not yet understand the Islamic State of Iraq and Syria (ISIS). Governments are accustomed to thinking of religious militants as networks of terrorists, saboteurs, assassins and opportunists hiding among the population – quintessential non-state actors, fighting the state. These ideas are obsolete against ISIS. ISIS is no mere militia; in its territory, it is the state. Its claims to statehood are neither unfounded nor ridiculous. Its control of vast territory and resources make it arguably the most powerful religious militant group in modern history. Just as states have strengths, however, they also have weaknesses. Exploiting these weaknesses is the only way to defeat ISIS – counterterrorism is not enough – but addressing the ISIS problem starts with understanding it.

ISIS will inevitably launch terrorist attacks on the United States. At present, however, the group is more focused on capturing land, territory, and resources, and fulfilling its dream of re-establishing the Islamic caliphate. ISIS’ proximate enemy is therefore not the United States, but any individuals, groups or governments standing in its path to statehood. As shown by its limited actions in Iraq, the United States has chosen to contain rather than destroy ISIS, and the group can certainly live with this. Having watched core al Qaeda sink into near irrelevance, ISIS has learned that, without secure territory, recruits and resources, it cannot confront the West. Indeed, even such a confrontation is just a means to a much broader, more ambitious end of de facto statehood.

Given the group’s limited size and ideological eccentricity, ISIS’ state-building project has been a surprising success. However, being a state carries obligations and commitments that expose ISIS to failure. By declaring a caliphate, ISIS committed itself to preserving and expanding its borders and controlling populations, including would-be dissidents. By projecting an image of confidence, control and inevitable victory, ISIS continues to attract local and foreign recruits, while co-opting its opponents or intimidating them into submission. Interrupting and rolling back some of its dramatic battlefield successes would have an enormous psychological impact, heartening its opponents, shattering its image of invulnerability and encouraging popular uprisings against it – insurgencies against the jihadist insurgents-turned-governors.

As an aspiring government authority, ISIS is also committed to providing public and social services to the population, activities in which it is already deeply engaged. These many public goods include power and water services, law enforcement, health care, dispute resolution, employment, education and public outreach. These responsibilities cost money, which in ISIS’ case comes from extortion (or taxation, as it were), control of energy and water resources, and plunder.

These sources are of course vulnerable to physical attack and disruption. Strategic assets such as oil facilities and utilities infrastructure are highly visible and vulnerable to air strikes. ISIS also makes little effort to disguise governing facilities, political headquarters and policy and security installations. As a self-appointed state, ISIS sees little reason to keep a low profile in its own territory. Remarkably, its rivals have made little to no effort to target these assets, which are essential pillars of ISIS’ political authority and governance. For those very reasons, however, destroying these facilities without empowering moderate Sunni groups to govern in ISIS’ place would only lead to state collapse in ISIS-held areas. International efforts continue to focus on foreign terrorist finances such as donations. ISIS – a self-funded organization – remains wealthy.

ISIS is brutal toward anyone who resists its rule or laws; force plays a significant role in its control over populations. Like any state, however, ISIS cannot govern by force alone. Governance requires at least some cooperation from key population segments – tribal leaders, local militiamen and business owners, professionals able to provide technical services, and others. ISIS’ ideology is unpopular, but like many citizens of dictatorships, ISIS’ subjects calculate that resistance is pointless without weapons, money and the ability to organize. On these fronts, they are outmatched, due in part to the lack of outside assistance for rebel groups fighting ISIS in its heartland in Syria. These potential subversives can be encouraged and enabled to overthrown the de facto ISIS government.

Above all, ISIS wants to control territory and borders. Otherwise it is just one militia among many others in Syria and Iraq. This requires fighting on multiple fronts against multiple enemies, within both Syria and Iraq. That means openly moving fighters, arms and equipment across vast desert areas. Therefore, like any conventional army, ISIS is prone to overstretch. These increasingly lengthy lines of communication are prime targets for ground and air attacks that would destroy ISIS’ territorial integrity and fighting capability. For now, however, its enemies – the Syrian regime, Syrian rebel groups, Iraqi Shia militias, Iraqi security forces and indeed the United States – are either unwilling or unable to hit ISIS where it would hurt most.

ISIS is certainly not more powerful than a coalition of all these potential rivals. Even taken alone, most of its enemies vastly outnumber it. But ISIS is adaptive, creative and ambitious. By contrast, the international community’s response has been rigid, predictable and unimaginative. If it continues to see and treat ISIS as simply a terrorist group, the international community will forever be playing defense, which ISIS can happily live with, until it no longer has to and can go on the offensive abroad. Unless its rivals understand and treat ISIS as a state, and exploit the vulnerabilities statehood presents, ISIS will continue to outclass them in ambition and sophistication, and it will have its state.

Faysal Itani is a resident fellow with the Atlantic Council’s Rafik Hariri Center for the Middle East. 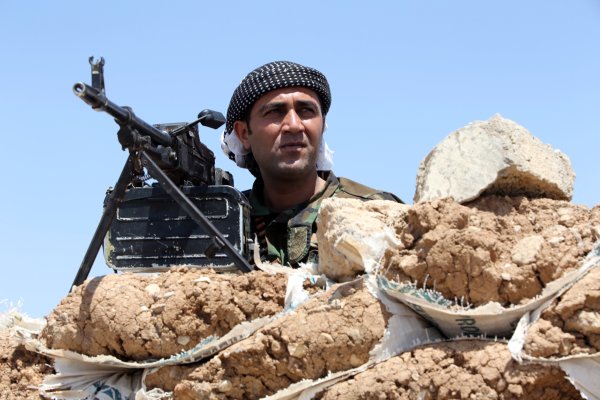 Why Kurdish Independence Is the Only Solution for the World
Next Up: Editor's Pick