For most Russians, indeed nearly all of them, the crisis in Ukraine has had a distant, almost virtual quality. It has been something they watched on TV, or debated in their kitchens, rooting for the pro-Russian rebel militias and cursing the Ukrainian government as though the war between them was hardly more than a gruesome sporting match. The emotions were visceral, but the suffering wasn’t personal. Only in the past few weeks has the crisis begun to hit home.

Russians have started asking themselves — or rather, they have been forced to ask themselves — whether they are prepared to make real sacrifices for the sake of their country’s policy in Ukraine. So far, of course, they have not had much choice in the matter. Russian President Vladimir Putin did not hold a plebiscite in Russia before deciding in March to annex the region of Crimea from Ukraine. Nor did he ask the public’s opinion before imposing a ban on Western food imports on Aug. 6 to punish the countries that have sanctioned Russia in response to the Crimean land grab. The food ban was simply imposed by a Kremlin decree “to protect Russia’s security,” and the predictable result was a run on supermarkets in Moscow and other cities, a spike in prices and panic buying in the dairy aisle.

It was not the first measure to test the public’s patience on Ukraine. Desperate for cash to develop Crimea, the Russian government has dipped into the national pension fund, essentially deciding to confiscate everything its citizens will contribute to it this year and the next. “No one has any intention of giving this money back, because this money has gone to Crimea,” said Finance Minister Anton Siluanov. (His deputy was promptly fired when he confessed on Facebook that he “feels ashamed” for the expropriation on Aug. 5.) Then there were those hapless Russian travelers, roughly 27,000 of them, who were stranded in airport terminals in early August after a Russian tour operator folded under the weight of Western sanctions. “We worry that this is only the beginning and that there will be a domino effect,” said a spokesman for Russia’s Federal Tourism Agency.

Indeed there is likely to be. As the sanctions war escalates, it will continue to eat away at Russia’s economic growth — and ordinary Russians will be forced to confront the question of whether they are prepared to pay for Putin’s foreign adventurism. In such a scenario, Lev Gudkov, one of Russia’s leading sociologists and director of the Levada Center, an independent pollster, believes that they are unlikely to fall in line behind their leader. “It’s one thing to express support,” he says, “but quite another to suffer for it.”

Expressions of support for Putin have lately been almost unanimous. In Levada’s surveys since the crisis began in March, his approval ratings shot up more than 20 percentage points to reach an overwhelming 87% at the end of last month. But that phenomenon has a flip side. Just as Russians applaud Putin for every perceived success in Ukraine, they are likely to fault him for every repercussion. Two-thirds of the population, says Gudkov, place all responsibility for the crisis squarely on Putin and his inner circle rather than on themselves. Only 7% to 12% are prepared to make personal sacrifices for the sake of Russia’s policies in Ukraine, he says. “The rest take a characteristic position: ‘Leave me out of it.’”

But short of emigrating, Russians can’t opt out. They will all have to deal with the fact that inflation is due to reach up to 9% this year, while the Finance Ministry has proposed a new sales tax of 3% to plug holes in the federal budget that have largely resulted from the crisis in Ukraine. Diabetics in Russia are having to stock up on insulin just in case it winds up on the import ban as well. People with special diets, including professional athletes, are scrambling to find Russian alternatives to the Western foods they need. “Nobody wants prices to rise,” said Arkady Dvorkovich, the government’s chief economic adviser, in trying to calm the public during a television appearance on Aug. 13. “Nobody wants hoarding. Nobody wants deficits.”

Yet that is what Russians can expect, and the task of making them accept this reality, and even embrace it, has fallen to the Kremlin’s propaganda outlets — and they have dusted off the Cold War creeds of self-sufficiency in trying to lift the nation’s spirits.

One of the more typical examples of the genre was published in Komsomolskaya Pravda, Russia’s most popular newspaper, on Aug. 3, a few days before Putin imposed the ban on Western food. Under the headline “Hard Times Await,” the piece lashed out at fast-food chains like McDonald’s and waxed nostalgic for the Soviet treats that Russians remember from childhood. “When the Iron Curtain fell, meat patties on round buns seemed to us like symbols of freedom,” wrote the author, Ulyana Skoibeda. “Now our national leader [Putin] has declared that Ossetian pastries and Tatar pies can compete with American hamburgers. It is a total reorientation. From looking outward, we turn in, from the West, into ourselves.”

All of this, she argued, should come naturally to Russians, as though they are just lapsed believers being shepherded back to their traditional faith. But the author (perhaps because she was about 14 years old when the Iron Curtain fell) neglects to mention how tight the cuffs of isolation were back then, and what a relief it was when they came off.

Even the Soviet elites had trouble believing the extent to which they’d been deprived. In the fall of 1989, two years before he was elected post-Soviet Russia’s first President, Boris Yeltsin took a tour of an American supermarket for the first time in his life. It was a typical franchise of the Randall’s grocery chain in Houston, the sort of place where workaday Texans did their weekly shopping. But as Yeltsin’s adviser, Lev Sukhanov, later recalled with almost childlike wonder in his memoirs, “it felt like we were standing right in the middle of a kaleidoscope.”

Yeltsin had never seen anything in Moscow, not even at the exclusive shops reserved for the chiefs of the Communist Party, that could compare to the gastronomical wonderland he found inside that Randall’s store. “The gleaming radishes the size of plump potatoes,” Sukhanov recounted, “the pineapples, the bananas.” There were some 30,000 items on the shelves, including more types of sausage than the Kremlin delegates could count. “The eye could not enumerate all the different kinds of candy and cakes, could not process the variety of their colors, their delicious attractiveness,” Sukhanov wrote. “It came as a deep shock.”

Later that day, as they flew from Houston to Miami to continue their official visit as members of the Soviet legislature, Sukhanov remembers Yeltsin sitting with his head in his hands. When he finally came out of his stupor, according to the memoirs, he said, “What have we brought our poor people to? All our lives we’ve been telling them fairy tales. All our lives we’ve been inventing. But the world had already invented everything long ago.”

Almost exactly 15 years after Yeltsin handed power over to Putin, the old fairy tales of Soviet dogma are being revived. Having gathered the entire Russian legislature in Crimea on Aug. 14, Putin told them in a speech that the ban on Western food was just a means of “supporting the product manufacturers of the fatherland.”

That has been a favorite talking point on Kremlin news outlets lately. In calling for Russians to embrace a patriotic diet, they have claimed that the domestic food industry has “the chance of a lifetime” to replace Western imports, which are in any case unhealthy and not all that good. But even some of Putin’s own spin doctors have had trouble sticking to that line.

During a radio program on a Kremlin-owned station on Aug. 10, the host went on a half-hour rant about the “stupidity” of trying to replace Western goods with Russian ones. “It’s all a catastrophe,” said Vladimir Solovyov, one of the most popular television personalities in Russia and usually one of the Kremlin’s favorite messengers. “What are we going to do, replace honey with crap? That doesn’t mean the crap will taste like honey … Don’t lie to yourself.”

His co-host, growing nervous as the live broadcast continued, tried weakly to convince him that Russia would manage, just as it did in the Soviet Union. Solovyov persisted: “I want to make my own choices, and not to have the state choose for me,” he said. “I want the right to choose for myself what wine I drink, and if I’m told that I don’t have this right, then I want to be convinced that I’m accepting these discomforts for a good cause.”

But is the conflict in Ukraine a good enough cause? Is it worth having to part with the comforts that Russians now take for grant? To give up the “kaleidoscope” of Western produce now available in Russian supermarkets? These are not easy questions, and it will be a lot harder to answer them with a resounding yes than it was to support the swift and easy annexation of Crimea. And as the consequences of that decision unfold, they will begin to weigh on Putin’s sky-high popularity. Gudkov, the sociologist, expects the President’s ratings to sink by November back to what they were before the annexation of Crimea. But that does not mean Putin will change course.

“Nobody supported the Soviet policy of isolation either,” says Gudkov. “It was very painful for people, that feeling of slouching toward a dead end. But nobody asked the public’s opinion whether they wanted this or not.” They simply had to pay the price for their leaders’ decisions. Then as now, nobody gave them much of a choice. 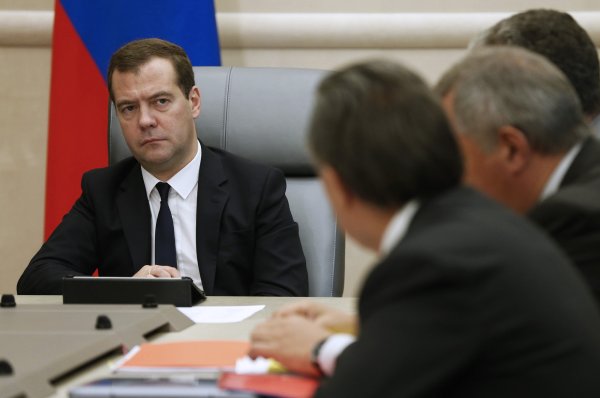