A Russian convoy numbering close to 300 vehicles has resumed its journey towards separatist-held areas in eastern Ukraine, laden with what Russia says is humanitarian aid supplies for the people of Ukraine.

Traveling at 50 miles per hour the aid convoy left a military base in Voronezh, Russia before dawn, the New York Times reports. The vehicles had been held there for over a day following outcry from the Ukrainian government, and as Western officials voiced suspicions they could be cover for a potential invasion.

But it now appears that the convoy will be permitted to enter Ukraine. The President of Ukraine, Petro Poroshenko, said Wednesday the trucks could cross following inspections by officials from Ukraine and the Organization for Security and Cooperation in Europe.

Russia says the dispatch of aid, which were dispatched early Tuesday, was intended to counter the escalating humanitarian crisis in eastern Ukraine. Moscow said the trucks, equipped with 649 tons of water and 340 tons of canned meat, were intended to help Ukrainians in areas like Luhansk where heavy fire has cut off water and electricity supplies. Residents are also without communication as phone lines have been hit.

Moscow and Kiev haven’t yet reached a complete agreement over the convoy’s crossing, however. If the vehicles cross at Izvarino, an eastern Ukrainian town close to Luhansk which isn’t under Ukrainian control, the existing agreement between Russia and Ukraine would need to be rewritten. Both sides had originally decided that the trucks would cross further north at a Ukrainian-held border crossing.

The West has regarded the Russian convoy with deep suspicion. Samantha Power, U.S. ambassador to the UN said if Russia acted unilaterally in its humanitarian mission, it would “be viewed as an invasion.” On Monday NATO head Anders Fogh Rasmussen told Reuters that there was a “high probability” of Russia invading Ukraine, potentially “under the guise of a humanitarian operation.”

Russia meanwhile insists that it’s working with the Red Cross despite their protestations otherwise. “All this is going on in complete coordination with and under the aegis of the Red Cross,” said Dmitri S. Peskov, spokesperson for Russian President Vladimir Putin to reporters.

Both convoys, Ukrainian and Russian, will arrive amidst escalating conflict in eastern Ukraine. The latest figures from the UN place the death toll at 2,086 since fighting began mid-April. Over half of these fatalities occurred in the past two weeks. 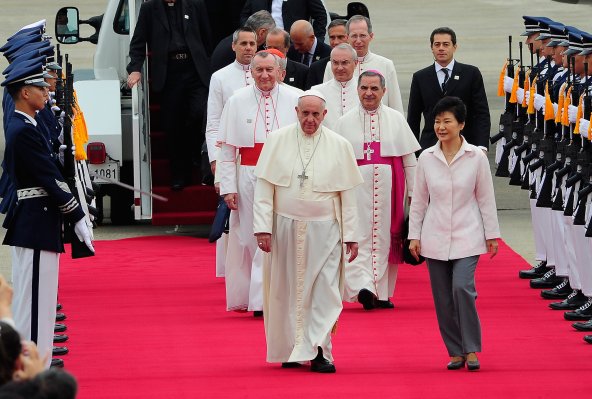 Pope Arrives in South Korea With a Message for All Asia
Next Up: Editor's Pick