In a country still sorting through the emotions stirred by the 2012 shooting death of Trayvon Martin, an unarmed black teen confronted by a neighborhood-watch volunteer in Sanford, Fla.–a country rattled by a disturbing video of Eric Garner, 43, an unarmed black man, dying after an apparent police choke hold on July 17 in Staten Island, N.Y.–it would be useful to know how often this happens. Are police resorting more quickly to lethal means, and if so, against whom?

But that’s data the U.S. declines to collect. The federal government can tell us how many pounds of boysenberries Americans harvest and how many hours per day the average American woman spends gardening. Yet no agency is tracking the number of people killed by police.

Brown’s death brought hundreds of protesters into the streets of St. Louis County, and what began as a peaceful vigil turned into a night of arson and looting followed by days of tension and distrust. While officers in riot gear patrolled the streets of Ferguson, Mo., firing occasional bursts of tear gas and volleys of rubber bullets, local investigators and the FBI refused to release details of the fatal encounter. The officer who shot Brown has been placed on paid leave, but officials have declined to release his name, citing threats to his safety.

The information vacuum was filled by the testimony of Brown’s companion on the day he died. Dorian Johnson, 22, told his story to a number of media outlets, including TIME: They were minding their own business when a passing Ferguson police officer rudely ordered them off the street where they were walking and onto the sidewalk. With little provocation, the officer then grabbed Brown around the throat. Brown struggled to free himself, and the officer drew his gun and started firing.

You can safely bet that further details and testimony will emerge from the investigation to turn this clear-cut outrage a murky gray. It’s rare that official inquiries into shootings by police find no justification for the use of deadly force. And most Americans are willing to give some slack to the men and women who guard the public safety. Still, if the eruption in Missouri helps put a spotlight on the subject of police shootings, some good will come of it.

The root of the problem is lack of training and accountability. Researchers who have gathered the data that the government won’t collect have found that better training and discipline can sharply reduce the use of lethal force without endangering cops on the beat. Independent researcher Jim Fisher, who counted 1,146 U.S. police shootings–607 of them fatal–in 2011, noted the hopeful fact that New York City reduced the number of police shootings from 314 in 1971 to 16 in 2012. How? Careful hiring and training of officers.

As they say in the recovery movement, the first step is admitting the problem. For St. Louis, that problem includes a long history of friction between white and black residents in a city that is defined by borders and boundaries. Its signature arch is meant to remind us that St. Louis is the place where the East ended and the West began. But its siting near the midpoint of the Mississippi also put St. Louis on the seam between North and South.

The history of St. Louis is burdened by a hyperconsciousness of dividing lines. The Dred Scott case of 1857–that spark in the powder keg of the Civil War–began in St. Louis as a question of whether a man’s human rights evaporated when he crossed the border into a slave state. In the decades since, few cities have taken a more systematic approach to racial separation.

In 1916 the city passed a zoning law that explicitly limited where blacks could buy homes. When the Supreme Court invalidated racial zoning laws the following year, the St. Louis Real Estate Exchange responded with a plan to concentrate blacks in certain neighborhoods. Many white homeowners, meanwhile, signed restrictive covenants forbidding them to sell their houses to black buyers.

Eventually that strategy failed as well. In 1948 the Supreme Court heard the case of an African-American family in St. Louis whose home purchase was blocked when a white neighbor sued to enforce a restrictive covenant. In an early victory for civil rights legend Thurgood Marshall, the court ruled that such covenants are unenforceable.

Next came redlining, the practice of steering black buyers into certain neighborhoods by discriminating on their mortgage applications. And through it all, white homeowners accelerated the division by moving away from the city center and into predominantly white suburbs–the same white flight that remade American metros from coast to coast after World War II.

The shooting of Brown and the violence that followed happened smack on one of those borders. Ferguson is an inner-ring suburb that is neither black nor white. In its 6 sq. mi., the city of some 21,000 encompasses rough-around-the-edges homes and turn-of-the-century Victorian manors. The population is roughly two-thirds African American and one-third Caucasian, and while relations among neighbors can be harmonious, the black experience of the mostly white city government and police force is often tense.

A study of police traffic stops by the Missouri attorney general found that Ferguson police tend to stop blacks disproportionately. “Ferguson is notorious for being prejudiced against blacks,” says George Chapman, a 50-year-old African American who has lived in the town most of his life but said he recently moved because he was “tired of the police.”

Yet many residents were dismayed to find that their city was now known for glass shards, looted shelves and armor-clad riot police. “This isn’t what Ferguson is about,” says one resident, Shante Duncan, 33. “This is a good community.” And like communities across the country, this one is looking to police for some candid answers to a painful problem.

–WITH REPORTING BY KRISTINA SAUERWEIN/FERGUSON 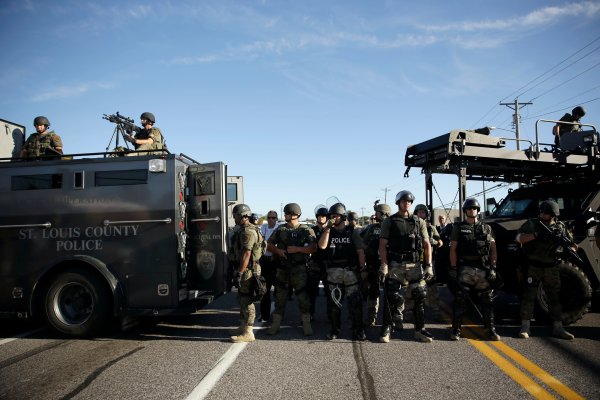 Journalists Arrested in Ferguson
Next Up: Editor's Pick