The Accidental War in Gaza

Before becoming what it is today–a shattered urban battlefield at the heart of an intractable war–the Gaza Strip was a refuge. The enclave beside the Mediterranean was one of two areas Palestinians fled to during the 1948 war that established Israel as a state. Today 70% of its 1.8 million residents count themselves as refugees of that conflict, a far higher proportion than in the terraced biblical hills of the West Bank, to which Palestinians also fled in 1948.

“We had a war,” says Etty Hodefi Cohen, who works in Ashdod, an Israeli city within easy striking distance of Gaza rockets. “1948. We won. We thought it was decided.”

It wasn’t. The Israeli-Palestinian conflict refuses to be decided. They had yet another war over the past five weeks, one of the bloodiest in the centuries-long conflict and quite possibly the hardest to comprehend. From a distance, this latest Gaza war first appeared to be about murdered teenagers. Then it was about missiles, thousands of which were fired by Gaza militants in indiscriminate volleys toward Israel. Finally it was about tunnels–concrete-reinforced and more numerous than Israeli officials had thought–running under the sandy soil of the Gaza Strip toward Israel and delivering a threat captured by Israel Defense Forces surveillance video on July 17: 13 dark figures emerging from the earth carrying guns.

Two weeks later, after Israel declared the 32 tunnels eliminated, the fighting raged on and the number of deaths approached 2,000, almost all of them Palestinian, a quarter of them children. Successive cease-fires came, expired, then came again as both sides met in Cairo to talk about the terms of a lasting truce. The negotiations underlined the nagging question at the heart of the most devastating fight Gaza has yet seen: Why?

“I ask myself that question all the time,” says Nahed Ferwana, 28, at the counter of a pharmacy in Shejaiya, where more than 70 people have died. “I still don’t know.”

The painful truth appears to be that the battle in Gaza was fought, as trench warfare tends to be, largely as a matter of routine. Neither side expected the fighting to resolve any of the core issues of the conflict, like the fate of the Gazan refugees or Israel’s security from attacks. Rather, renewed fighting hinged on bureaucratic particulars institutionalized by decades of conflict. Among other things, Gaza’s ruling Hamas party wanted Palestinian fishermen to be allowed not three but six nautical miles into the Mediterranean. Israel refused to address the request while under fire and demanded offshore inspections of all cargo headed to Gaza, to prevent–or more realistically, slow–militants’ restocking their badly depleted missile stores.

“I call it the stupid war,” says Raji Sourani, director of the Palestinian Center for Human Rights, his eyes flashing in rage as he speaks in the driveway of al-Shifa. Like every other medical facility in Gaza, al-Shifa was regularly overwhelmed during the war by arrivals of gurneys splattered with the blood of the wounded and the dead. “It’s aimless.”

It’s also a deadly paradox. That Gaza’s most lethal fight is also its hardest to trace makes it all the harder to end. Absent achievable goals, only exhaustion may finally force both sides to break the habit of war.

How did this happen? mostly by accident. The sequence began with a shotgun wedding. Hamas and Fatah, the odd couple of Palestinian factions–one Islamist, the other secular–had been feuding for eight years, having come to blows over who would rule in Gaza. Hamas prevailed, leaving Fatah with the West Bank, but on June 2 the two sides formally ended their rift, installing a unity government that, tellingly, included no one from Hamas. Politically, the Islamic Resistance Movement, as it is formally known, was on its heels. Shut out by first one longtime sponsor, Iran, and then another, Egypt, Hamas began the summer at its lowest point ever.

And things were about to get worse. Ten days after the unity pact, three Israeli teens were kidnapped while hitchhiking in the West Bank, where they were studying religion in one of the 200 or so settlements Israel maintains there. Their presumed abductors were linked by Israeli security services to Hamas. In response, Israeli Prime Minister Benjamin Netanyahu sent thousands of troops into the West Bank with the goal of shutting down Hamas, arresting its activists and shuttering its offices. “There is no possibility of talking peace with Israel while, at the same time, establishing a unity government with Hamas, a terrorist organization that aspires to destroy Israel,” Netanyahu said on June 14.

It was the biggest crackdown on the West Bank in a decade and widely seen by Palestinians as the start of the battle that finally moved to Gaza. The route ran through Israel itself. When the teens turned up dead on June 30, the cries for revenge were answered by Jewish extremists who within hours allegedly abducted and burned alive a 16-year-old Palestinian from East Jerusalem. The atrocity inflamed the Palestinian population that resides within Israel, where every fifth citizen is an Arab.

As the protests raged, Gaza militants offered solidarity: Hamas called for a third intifadeh, while other factions fired rockets toward Israel. Netanyahu first warned Hamas to halt the fire, then launched a strike that killed six Hamas fighters. The next day, a new war was under way.

Invasions of Gaza are so routine that Israeli security officials refer to the usual offensive operations as “cutting the grass.” But this one was different. Having commenced accidentally, it proceeded onto new ground with unusual vehemence.

Militants had found a chink in Israel’s armor. In June 2006, Palestinians emerged from the earth just outside the Gaza perimeter and dragged into the hole a gangly Israeli private named Gilad Shalit. Five years later Netanyahu freed 1,027 Palestinian prisoners for the one Israeli. Hamas declared a “war of the tunnels,” and kidnapping became a primary preoccupation of Palestinian militants wherever Israelis were within reach. By the time the three Israeli teens were taken, Israeli security services had thwarted more than 60 kidnap plots. “Capture them? Why not?” says Samiha Ahmed Abu Ukal, 72, in Gaza City. “As much as we can! In order to free our sons from imprisonment.”

So the battlefield was shaped by Israel and perforated by Hamas. The militants’ massive strategic commitment to unguided missiles, once capable of inflicting significant casualties, proved largely impotent against Israel’s Iron Dome missile-interception system. But by drawing Israeli ground troops onto their turf, as the surveillance footage of July 17 did, the militants could engage at close range. In the ground operation that followed, the number of Israeli soldiers killed in action–64–was more than 10 times the number killed by enemy fire in the 2008–09 offensive. Still, Palestinian civilians paid most dearly.

Israel’s efforts to avoid “collateral damage”–including its making calls and sending texts to buildings about to be bombed–go by the boards when a soldier is in danger of being abducted, according to Israeli officials and news reports. To try to prevent another Gilad Shalit incident, the Israeli military activates its “Hannibal procedure,” tossing aside precision munitions in favor of artillery barrages around the last place the presumed captive was seen, Israeli military officers say. More than 100 Palestinians were killed in such barrages in the southern city of Rafah, where a mortally wounded Israeli soldier was seen being dragged away.

The result was a level of violence new even to Gaza. While skeptical of civilian casualty counts being generated by a Ministry of Health controlled by Hamas, Netanyahu’s spokesman, Mark Regev, said the numerous tunnels and longer-range rockets necessitated Israel’s offensive. “They posed a formidable military threat that did require intensive combat operations,” Regev said. Polls showed that Jewish Israelis overwhelmingly supported Netanyahu’s conduct of the war.

Those who calculated the damage on the Palestinian side were shaken and angered. “The scale of destruction, death, density of fire–unprecedented,” says Sourani, the human-rights activist. “I’m 60. I’ve never, ever witnessed anything like it. You have entire areas razed–they don’t exist. You have 60 families razed–they don’t exist. We have 540,000 refugees in Gaza. Finally, there’s no safe haven in Gaza. Not a single place.”

This is both the image of Gaza and its perverse value.

In the starkest political terms, the civilian toll serves the Palestinians’ cause, underscoring its fundamental narrative that they are victims of Israel. In legal terms, the specifics would help the Palestinians if they try to bring Israel before the International Criminal Court, as some of their leaders have hinted they will. And in terms of international public opinion, the war energized those who promote a boycott of Israel, a blunt instrument that also accommodates degrees of the anti-Semitism that surfaced in some European protests against the war. Eight synagogues were attacked in France in recent weeks, anti-Semitic graffiti was sprayed on a Jewish neighborhood in Rome, and Jewish museums in Norway were ordered shut as a precaution.

But Israel benefited as well. Any battle against Hamas–whose unguided missiles constitute a war crime, according to legal experts–ensures that the subject at hand remains Israel’s security, a topic easier to address in the short term than peace talks, which collapsed this spring under their own deadweight. And in Gaza, says former military-intelligence chief Amos Yadlin, Israel’s military delivers results. “We can use much more firepower” against the militants, says Yadlin. “We neutralize their main strategic forces and leave them, alone, without any achievement, without any demands, in their devastated place called Gaza.”

If Gaza’s ruin is the result of routine interests playing out on both sides, the devastation this time, however, is so profound, it may have created a point of common interest and a new source of leverage for its hostile neighbors.

Israel wants the Palestinian Authority, which until now has operated only in the West Bank, to take up key positions in Gaza. “Most Cabinet members understand that if Hamas is the problem–and it is–then [Palestinian Authority President] Mahmoud Abbas and those who do not use terror against us are part of the solution,” Justice Minister Tzipi Livni said on Israeli television on Aug. 8.

Abbas, who heads Fatah, is a moderate and preferred by Washington, which has mostly watched the latest war from the sidelines. Also backing Abbas are Arab leaders–in Saudi Arabia, in much of the Gulf and, most important, in Egypt–who loathe the Muslim Brotherhood, from which Hamas sprang. All favor seeing his Palestinian Authority take charge of Gaza, even now that it includes Hamas. Turns out the unity deal isn’t such a bad idea after all.

“We are praying to God to make them united,” says Abu Ukal, the elderly Gaza woman who spoke up for the tunnels. Born in a village just outside Gaza, she tells of her father’s selling land to buy a gun, the central narrative of the Palestinian national struggle she has repeated to her children and grandchildren. But it’s not what’s on her mind just now, on the steps of a clinic at al-Shifa. Never, Abu Ukal says, has she seen fighting like that in recent weeks. Her priority, she reports, is the same one that prompted Netanyahu to launch the first air strikes, in hopes that children in southern Israel would not have to sleep in their shoes.

“We need to live in some kind of stability,” the old woman says. “We get really tired from war after war after war.”

–WITH REPORTING BY AARON J. KLEIN/TEL AVIV AND YONIT FARAGO/HOLON 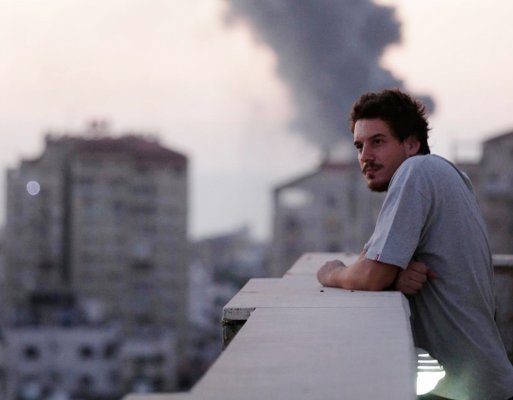