Brazil was thrown into mourning Wednesday by the unexpected death of presidential candidate Eduardo Campos in a plane crash. The popular former governor of Pernambuco State in northeast Brazil’s was just 49 and his death threw October’s election wide open.

“The whole of Brazil is in mourning. Today we lost a great Brazilian,” Brazilian President Dilma Rousseff said in a statement on the loss of her presidential rival — a former member of her predecessor Luiz Inácio Lula da Silva’s left-wing Workers’ Party’s coalition government. Lula and Rousseff’s Workers’ Party (PT) have run Brazil since winning in 2002.

Campos and six others were killed when the small Cessna plane they were traveling in from Rio de Janeiro to an event in Guarujá on the São Paulo state’s coast crashed in port town Santos after hitting bad weather, the Brazilian air force said in a statement.

His death sent shock waves throughout Brazil. Brazilians posted tributes on social media and the hashtag #RIPEduardoCampos was trending on Twitter.

“It is a huge loss for Brazil,” said André Singer, political scientist at the University of São Paulo and former press secretary for ex-President Lula. “Everyone is very shocked.”

Rousseff is currently leading the pack for re-election in October, with 38% according to the most recent poll. Campos, the candidate for the Brazilian Socialist Party (PSB) was in third place with 9% and seen as a “third way” politician with business credentials who believed in private investment but also invested in education and health.

Both Rousseff and Aécio Neves — the candidate for the center-right Brazilian Social Democratic Party, who, at 23%, was second in the recent poll — canceled campaigning Wednesday out of respect.

“The campaign has now gone into limbo,” says David Fleischer, professor of political science at the University of Brasília.

Campos first became a state deputy for the PSB in 1990. He won two terms as governor of Pernambuco state, in 2006 and 2010, presiding over an economic boom and major infrastructure projects. Under him, Pernambuco’s GPD grew an average of 4.9% from 2007 to 2013, compared with Brazil’s 3.5%, according to the newspaper Folha de S. Paulo.

He was also heir to a political dynasty. His grandfather Miguel Arraes, who died on the same day in 2005, was a three-time governor of Pernambuco and was exiled during Brazil’s military dictatorship.

On Tuesday night, Campos was interviewed live on TV Globo’s nightly television news program Jornal Nacional. Now the expectation is that his running mate Marina Silva, a former Environment Minister who came in third in the 2010 election as Green Party candidate, will take his place. Silva had almost taken the same plane.

“I think she will be candidate. It is early to say what place she will occupy,” says Fernando Abrucio, a political scientist from the Getulio Vargas Foundation in São Paulo. “In the northeast she won’t have the same votes,” Abrucio adds. “In the big urban centers she has more popular support than Campos.”

Abrucio says Silva is more likely to pick up the “protest” vote among young, more educated Brazilians who flooded onto the streets in mass demonstrations in June 2013. “A part could go to Marina, there is no doubt,” he says.

Campos had been wooing Brazil’s powerful agribusiness lobby, which distrusts Silva. “If she becomes the candidate, she is definitely going to insert the whole question of sustainability and the environment into the campaign,” Fleischer says.

Silva is an evangelical Christian, which helped her pick up almost 20 million votes in 2010. But this time Brazil’s expanding evangelical Christian population has its own candidate, Everaldo Dias Pereira, popularly known as Pastor Everaldo, currently in fourth place with 3%.

Abrucio says Campos’ main legacy is likely to be regional; his loss nationally will be felt more in what he could have achieved. “He was 49, he was not part of the generation that took part in the process of redemocratization in Brazil, like Lula and [former President] Fernando Henrique Cardoso,” he says. Two decades of military dictatorship ended in 1985.

“They did their job and we were starting a new cycle,” Abrucio adds. “He was a transitional politician.” 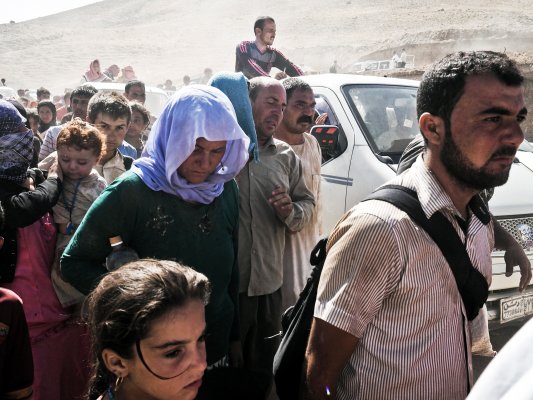 The Yezidis—and the Kurds—Hope for U.S. Salvation in Iraq
Next Up: Editor's Pick