“This machine surrounds hate and forces it to surrender” are the words etched on Pete Seeger’s banjo. More than anyone else, the late Seeger taught me that you can use your place in life to be a force for good in the world. Seeger used his banjo and voice to advance workers’ rights, voting rights and civil rights. And he helped make the world a more just place.

But now the foundation of our republic – the principle of one person, one vote — is under threat. A series of calamitous 5-4 Supreme Court rulings, such as Citizens United v. Federal Election Commission, triggered a tsunami of corporate cash into politics and sent a wrecking ball into the cornerstone of our democracy. We’re moving backwards, not forwards.

While I can’t sing or play banjo, I do have my name on a lot of ice cream packages. So, with a little help from my friends, I’ve built my own machine to attack injustice. The Amend-O-Matic Stamp Mobile has been traveling throughout the country to music festivals and events in support of a constitutional amendment that affirms that corporations are not people and money is not free speech.

Here’s how it works: People put a dollar in the machine. The dollar spirals up the “Tower of Corrupted Power” and coasts down a route that illustrates the Supreme Court rulings that must be overturned to get money out of politics. The top-hatted mask of “CorpoMan’s” face moves aside to reveal that he’s really a corporate office tower, while a sign pops up reading “Corporations Are Not People.” The dollar then reaches the “Money Mouth,” a large face that opens its mouth and vomits money while a sign reading “Money Is Not Speech” pops up. Finally, a bill is stamped with a message that says either “Stamp Money Out of Politics” or “Not To Be Used For Bribing Politicians” and the user retrieves his or her money. Later, when people spend their stamped dollar, they help spread the message to get big money out of politics.

Winning a constitutional amendment is no easy task. And there are a lot of skeptics out there that tell me one has no chance of passing. But that’s what people said about emancipation. They said it about women’s suffrage and they said it about the Civil Rights Movement, too. As Justice Louis Brandeis said, “Everything in the world that’s been worth doing had been declared impossible before it was done.” If we want a government of, for and by the people, then we have no other option.

Sixteen states and 600 towns and cities have already passed resolutions calling on Congress to propose an amendment. Fifty U.S. Senators and more than 100 House members have come on board. And this fall, the Senate will hold a vote on a proposed amendment. We’re making rapid headway, but still, people say it will never happen.

Well, Pete Seeger has told a little story about the teaspoon brigade many times. He once told it to me when I was feeling down and without hope. And I’ll tell it to you. Pete was walking along one day and he came upon a huge seesaw with a big heavy rock on the side that was down and a big bucket on the side that was up. There were all these little people scurrying around with teaspoons taking sand from a big pile and climbing up a ladder and dumping it in the bucket and then going back for more sand. But Pete noticed that there were holes in the bucket and the sand was running out as fast as they were putting it in. So he grabbed one of the guys with the teaspoons and said, “Don’t you see? The sand’s running out as fast as you’re putting it in. You’re never gonna get that seesaw to switch around.”

And the guy stopped for a moment, mopped his brow and said, “Oh, you don’t understand. There’s more of us with teaspoons all the time and sooner or later we’re gonna be putting sand into the bucket faster than it’s leaking out and then, shwoop, the seesaw will switch, and people are gonna say, ‘How did that happen so fast?’ and we’ll just say, “Us and our little teaspoons.”

Well, we don’t have teaspoons, but we have stamps. And we’re stamping messages on dollar bills to create a mass visual demonstration. Each stamped bill is seen by approximately 875 people. That means if one person stamps four bills a day for a year, the message will reach more than 1 million people. We currently have more than 25,000 people across the country stamping and soon it will be 50,000 and then 100,000. The movement to take back our government is snowballing. And one day, shwoop, the seesaw will switch.

Ben Cohen is the co-founder of Ben & Jerry’s Ice Cream. He is the founder and head stamper of StampStampede.org, a non-profit dedicated to reducing the corrupting influence of money in politics. 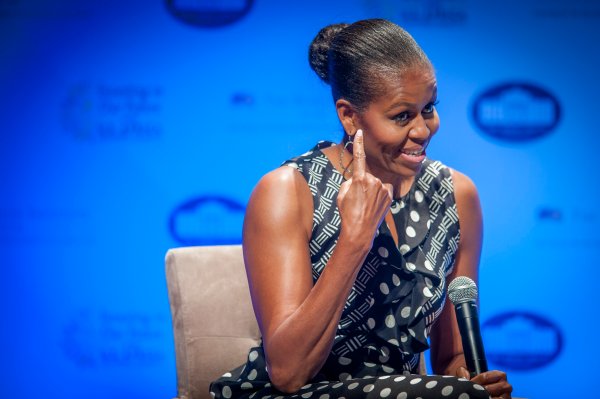 Michelle Obama Jokes That 'Women Are Smarter Than Men,' Men Don't Get It
Next Up: Editor's Pick