This undated image provided by the US Army shows new Army grooming regulations for females.
US Army/AP
By Maya Rhodan

Hagel said the military had spent the past three months reviewing the definition of acceptable styles in a letter to Rep. Marcia Fudge (D-Ohio), chair of the Congressional Black Caucus, which led a charge against the military’s decision to ban natural hairstyles like dreadlocks and twists.

“Each Service reviewed its hairstyle policies to ensure standards are fair and respectful while also meeting out military requirements,” Hagel wrote. “As a result of these reviews the Army, Navy, and Air Force determined changes were necessary to their Service grooming regulations to include additional authorized hairstyles.”

Three branches of service including the Army, Air Force, and Navy will now allow service members to wear their hair in two-strand twists. The Army also increased the size of acceptable braids, and both the Army and Air Force will remove the terms “matted and unkempt” from their grooming guidelines.

In a statement, Fudge thanked Secretary Hagel for his swift response to their concerns. “These changes recognize that traditional hairstyles worn by women of color are often necessary to meet our unique needs, and acknowledges that these hairstyles do not result in or reflect less professionalism or commitment to the high standards required to serve within our Armed Forces,” Fudge said.

The military originally announced the restrictions on how soldiers can wear their hair in March as a part of sweeping new rules on grooming, known as Army Regulation 670-1 “Wear and Appearance of Army Uniforms and Insignia”.

Hairstyles like dreadlocks or locs, two-strand twists, and other natural hairstyles were prohibited. Styles including afros were also banned in an effort to “maintain uniformity within a military population,” military officials said.

But African American soldiers and members of the Congressional Black Caucus felt the changes were racially insensitive. The inclusion of terms like “matted and unkempt,” in the military’s directions on which styles were unacceptable did not help cool tensions.

“Most black women, their hair doesn’t grow straight down, it grows out,” wrote Sgt. Jasmine Jacobs in a White House petition calling for the military to reverse its decision, first reported by Military Times. “I’m disappointed to see the Army, rather than inform themselves on how black people wear their hair, they’ve white-washed it all.”

The ban was also mocked in a sketch on The Daily Show with Jon Stewart called “Operation Black Hair.” 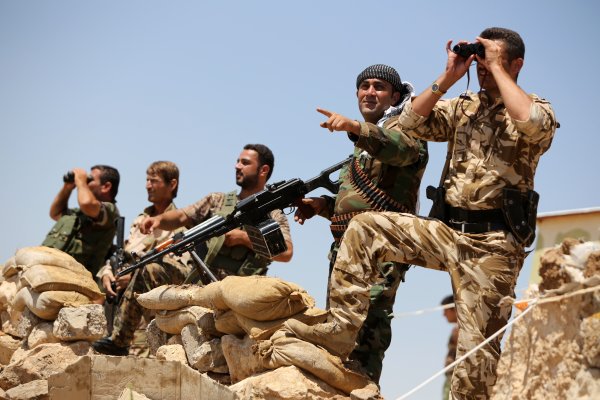 The U.S.’s Timid Third Iraq War
Next Up: Editor's Pick