With their hands raised, residents gather at a police line as the neighborhood is locked down following skirmishes on August 11, 2014 in Ferguson, Missouri.
Scott Olson—Getty Images
By Denver Nicks

The Federal Aviation Administration issued a no-fly zone over Ferguson, Missouri, Tuesday at the request of the St. Louis County Police Department.

The St. Louis County Police Department told TIME it asked the FAA for the flight restriction after a police helicopter was fired upon “multiple times” during civil unrest Sunday. Ferguson, located just outside St. Louis, Missouri, erupted in street violence amid demonstrations sparked by the death of Michael Brown, a black teenager who was shot and killed by police on Saturday.

The FAA order restricts flights over the Ferguson area below 3,000 feet to first responders only, including medical and police helicopters. Private aircraft, including news helicopters, are prohibited from flying below 3,000 feet in a 3-mile radius around the town. The rule doesn’t apply to aircraft landing at or taking off from the nearby Lambert–St. Louis International Airport, a major commercial hub. The restriction is in place through August 18.

The order says the flight restrictions were put in place “to provide a safe environment for law enforcement activities.” The FAA would not elaborate further on the reason for the St. Louis County Police Department’s request. “If you want it, file a FOIA,” FAA Spokesperson Elizabeth Cory told TIME, in reference to a Freedom of Information Act request.

It’s not unusual for local police departments to request flight restrictions over potentially dangerous zones, and it’s typically done to clear airspace for police helicopter operations. The Ferguson restriction, however, may make it more difficult for news media to get aerial footage of the town as the Brown story continues to develop. 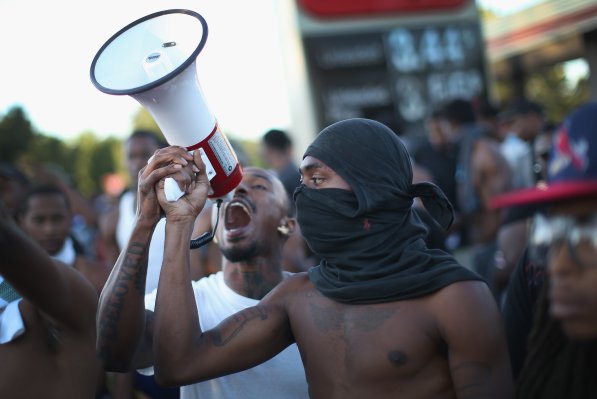 The Tangled Roots of the Michael Brown Shooting
Next Up: Editor's Pick