Trump Isn't the Only Loser in Atlantic City

How big a loser is Atlantic City? So big that Donald Trump sued to have his name removed from two casinos he no longer controls. He may have to amend the suit, since one of them, Trump Plaza plans to shut down next month. And it will have company. The two-year old, twice-bankrupt, $2.4 billion Revel casino will also close after its owners failed to find a buyer, company officials announced Tuesday. As the saying goes, you don’t throw good money after bad.

Revel’s shutdown brings A.C.’s losing streak to four properties that announced a closing this year. The Atlantic Club was taken out earlier this year and Showboat, owned by Caesars Entertainment, locks down at the end of the month. Through June, revenues at the casinos are down 6.3%, continuing a long-term trend. The city’s casinos brought in $2.86 billion last year compared with $5.2 billion in 2006.

Atlantic City is a victim of the saturated mid-Atlantic casino market, and nearly 8,000 workers are slated to lose their jobs as the price to pay. There will be more closings, and not just in the mid-Atlantic states. In Tunica, Miss., Harrah’s (also part of Caesars) is closing a casino, citing declining gaming revenues due to higher competition.

In Atlantic City, some of those displaced workers will be able to catch on at the city’s remaining seven casinos—who will no doubt see an uptick in business—but the losses and closures are indications that the runaway growth days of gaming are over. Any new casino built in the region—indeed, just about anywhere– will have to take business away from somebody else.

And that’s exactly what’s been happening to Atlantic City– a municipality that never blossomed into the revived seaside resort envisioned when New Jersey opened its first legalized casino in 1978. It has remained mostly a weekend gambling jaunt for many punters, and they have since found other places to play. Oddly enough, north of Atlantic City, from Asbury Park to Long Branch, Jersey’s casino-less shore towns have revitalized and grown, despite taking a hit from Hurricane Sandy.

What’s grown around Atlantic City is competition. Just to the south in Delaware, three casinos are now operating. But one of them, Dover Downs, showed a 10% drop in revenues its first quarter. In Pennsylvania, there are 12 casinos in Philadelphia, Bethlehem, in the Poconos and near Pittsburgh. And revenues in that state have begun to slide in part because of competition from Ohio. The Buckeye state is about to open its 11th gambling den with the debut of the Hollywood Gaming at Mahoning Valley Race Course.

Americans threw down nearly $39 billion in gaming halls last year, according to the University of Nevada at Las Vegas, but that amount is flat with 2012. Meanwhile, the number of gambling locations continues to rise. As a result, says UNLV, 10 out of the 22 states with gaming in 2007 have seen declines since then. That would include Connecticut. Revenues from Foxwoods and Mohegan Sun peaked at $1.7 billion in 2006; they dropped to $1.17 billion last year according to UNLV. Pieces of the pie will only get smaller now that Massachusetts is planning to join the game.

It’s still possible that someone could buy the closed Revel and reopen it as a casino. “We hope that Revel can be a successful and vital component of Atlantic City under a proper ownership and reorganized expense structure,” the company said in a statement. But that doesn’t make much economic sense. Neither does building another casino anywhere in the region, but don’t bet against it. Plans are being hatched for a betting fortress in Jersey City, where the population density might favor the house a little more. And across the border in New York, Gov. Andrew M. Cuomo is planning to add four casino destinations in the upstate region to the nine racinos and five casinos already operating. The promise is jobs and more tax revenue, but New York may eventually discover what New Jersey did: that it had four more casinos than it actually needs. 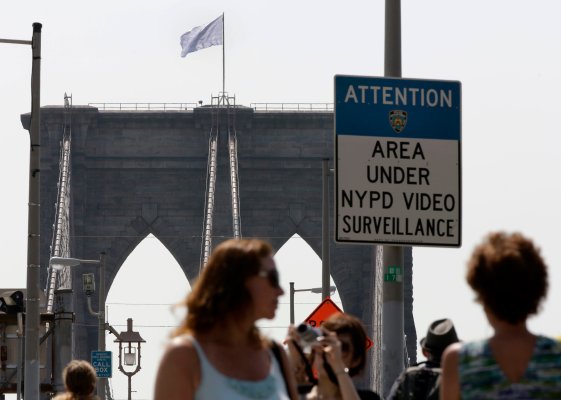 Case Closed on Mystery of Brooklyn Bridge White Flags
Next Up: Editor's Pick