Robin Williams was beloved by the U.S. military, perhaps even more so than by the American public. He carried Bob Hope’s mantle as a funny man far from home, often in inhospitable places. Throughout his career, Williams made six USO tours to Iraq, Afghanistan, and 11 other countries and performed for 90,000 troops by the time of his final tour in 2010.

He had the troops roaring in Baghdad in 2003, shortly after the capture of Saddam Hussein. “I love the fact that when he came out of that spider hole, he wanted to negotiate,” Williams said, before changing his voice into that of a bellowing soldier: “It’s a little late for that, bubsy! You’re at the point where you’re going to share a cell with a large man named Bubba. I’m gonna be yo’ new Baghdaddy.”

He also poked fun at the Army itself, including a change to uniforms that appeared to be computer-generated. “The new Army camouflage—it’s digital,” he told troops in Kabul in 2007. “So you can disappear in front of a computer.”

“Williams traveled around the world to lift the spirits of our troops and their families,” the USO posted on Facebook following the news of Williams’ passing. “He will always be a part of our USO family and will be sorely missed.” The post had attracted nearly 60,000 “likes” by midday Tuesday.

Defense Secretary Chuck Hagel made a statement of his own on Williams, saying that “from entertaining thousands of service men and women in war zones, to his philanthropy that helped veterans struggling with hidden wounds of war, he was a loyal and compassionate advocate for all who serve this nation in uniform. “He will be dearly missed by the men and women of DOD—so many of whom were personally touched by his humor and generosity.”

Jim Garamone, a writer for the Pentagon’s internal news service, wrote Tuesday of the comedian’s caring and compassion for those fighting the nation’s wars:

Rear Admiral John Kirby, the Pentagon’s top spokesman, recalled asking Williams, the father of three, for some fatherly guidance during that last 2010 tour. “I once asked Robin Williams to offer advice for my son, who would soon turn 18,” Kirby tweeted early Tuesday. “’Follow your heart,’ he said. ‘The head is sometimes wrong.'” 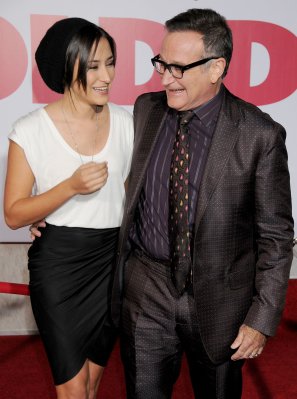 Robin Williams' Daughter Pays Tribute to Her Father
Next Up: Editor's Pick