Kurdish military volunteers amass near the frontline at the outskirts of the town of Makhmor, 35 miles south of Erbil, the capital of the Kurdish Region of Iraq, Aug. 9. 2014.
Sebastian Meyer—The Washington Post/Corbis
By Jay Newton-Small

For a few hours, the city of Erbil was in a state of panic. Word came that Gwar, just 30 minutes from the Kurdish capital, had been taken by the Islamic State of Iraq and Syria (ISIS), and Kurds and ex-pats alike were packing up, trying to book airline tickets or, in a worse case scenario, preparing to drive to Turkey. But then American war planes swooped in and began bombing and President Obama pledged to defend Erbil.

Kurds breathed a sigh of relief. “The most important development was the decision by the United States to save lives,” says Hoshyar Zebari, a former Iraqi foreign minister and a prominent Kurd. “U.S. help is deeply appreciated.” Dr. Fuad Hussein, chief of staff to Kurdish President Masoud Barzani, welcomed the UN resolution condemning ISIS, and praised coalition forces for their technical and humanitarian assistance. He noted that the U.S. had co-ordinated tactical efforts with Peshmerga forces, allowing the Kurdish fighters to prepare to go on the offensive. “We used to say Kurds don’t have any friends but the mountains. But that doesn’t ring true anymore,” he said.

That said, many Kurds still carry lingering worries that the U.S. will betray them once again. “There’s a history of contact and betrayal with the U.S. and the Kurds where the U.S. made contact and helped but never jumped in with both feet,” says Quil Lawrence, author of The Invisible Nation: How the Kurds’ Quest for Statehood Is Shaping Iraq and the Middle East, and a correspondent with NPR. “The Kurds have been very frustrated with a lot of the stages long the way,” he says. “But certainly these airstrikes would restore some of that trust. I feel like I’ve had many Kurds quote Churchill to me in the past week: ‘Americans can always be counted on to do the right thing… after they have exhausted all other possibilities.’”

Finally, it seems, the U.S. has exhausted all other possibilities in Iraq and all that’s left is to rely upon the Kurds. It’s only taken a century.

Nearly a hundred years ago, the Kurdish rebel leader Sheikh Mahmoud Barzanji carried around in his pocket a copy of Woodrow Wilson’s 14 Points, so inspired was he by American self-determination. And yet it would be the Americans who would help deny the Kurds the same right at nearly every turn. Two years after Wilson delivered that speech, the Allies agreed to an independent Kurdistan in the 1920 Treaty of Sevres. But by 1923, in the Treaty of Lausanne that recognized Kemal Attaturk’s Turkey, the international community abandoned the Kurds and the referendum promised in the Treaty of Sevres was never realized. Thus began the Kurdish struggle for independence.

After several thwarted attempts to break away from Iraq, the Kurds finally got their first indirect aid from the U.S. in the early 1970s, more thanks to the Shah of Iran than anything else. In 1972, Iraq aligned with the Soviet Union and the Shah pushed the U.S. to arm the Kurds by selling them Soviet weapons seized in Egypt. By 1974, the Kurds were in open rebellion led by Mullah Mustafa Barzani, of the same tribe Barzanji was from. But by 1975, Iran and Iraq made peace under the Algiers Accords. Iranian support for the Kurdish uprising abruptly came to a halt and the rebellion collapsed.

Barzani fled to Iran and then America, where he died in 1979, the same year of the Iranian Revolution, where yet again U.S. allegiances shifted. And, yet, again, the Kurds were the unwitting victim.

Towards the end of the First Gulf War, the Kurds saw a window for independence. Encouraged by the Americans, they rose up against Hussein for the third time. Hussein sent in the army and rolled over the Kurds, slaughtering thousands of villagers as they passed through. More than 1.5 million Kurds fled through the mountains to Turkey. American troops and arms never materialized, though they eventually sent in air support, which helped the Kurds push Hussein back to Kirkuk. In order to protect the Kurds, a no-fly zone was formed that lasted nearly a decade, until the Second Gulf War.

By the time the Turks refused America passage for the 2003 invasion of Iraq, the Kurds were in a position to offer themselves as a viable alternative. Fighting side-by-side with American special forces, the Kurds believed that their day had finally come: independence couldn’t be far away. But in the aftermath of the invasion, the Kurds were taken aback when the U.S. tried to disarm them and insisted they join the new government. Warily, the did so, but Iraqi Prime Minister Nouri al-Maliki has not been the partner they’d hoped for.

Maliki warned repeatedly that the Kurds did not have the authority to drill and export their own oil, and that empowering them would lead to the end of Iraq. By late 2011 some 60,000 Kurdish peshmerga and Iraqi forces were at a stand off near Kirkuk over the oil dispute. But, then, in 2013, Fallujah fell to Sunni extremists and then in the summer of 2014, Mosul and Tikrit fell to ISIS. The Iraqi Army retreated back to Baghdad. The Kurds took full control of Kirkuk and its refinery.

But U.S. refusal to equip the Kurds, and Baghdad’s refusal to share U.S. arms with the peshmerga, left Kurdish forces weakened, low on ammunition and unable to defend a 600-mile border border. ISIS advanced within 30 minutes of the Kurdish capital of Erbil as panicked Kurds and foreign workers began packing and fleeing to the airport or north towards Turkey. Last week, the U.S. stepped in and bombed ISIS and President Obama pledged to defend Erbil. For the first time ever, the U.S. said it would directly arm Kurdish troops. It’s not exactly self-determination — but it’s a start. 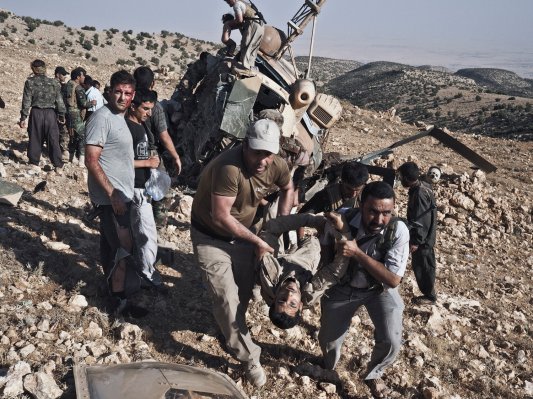 See the First Photo From the Iraqi Helicopter Crash
Next Up: Editor's Pick