Robin Williams: The Comic Who Was Hamlet

Who was Robin Williams? Or rather who were? He became an overnight TV sensation playing an amiable extraterrestrial on Mork & Mindy. In his first movie, Popeye, he starred as a comic-strip sailor. His chameleonic Genie in Aladdin ransacked the attic of comic caricatures. At the top of his form, as a frequent guest on David Letterman’s show in the ’90s, he spoke in tongues: any language or accent, any human or mammal or alien, geysering nonstop shtick of the highest order, leaving viewers astonished, thrilled and wearied.

The effort of juggling all those personalities — and pursuing parallel careers as a comic dervish and a serious, Oscar-winning actor — apparently left Williams exhausted as well. He died at his home in Tiburon, Calif., at 63, an apparent suicide. “Robin has been battling severe depression of late,” his publicist Mara Buxbaum said. “This is a tragic and sudden loss.”

Short, chunky and hairy, driven by angels or demons, Williams followed his dramatic muse to the Juilliard School, where the dean, John Houseman, told him he was wasting his time there and should try stand-up. Playing one character at a time, for months on end, didn’t properly exploit Williams’ unique gift of being everyone at once. His true model and mentor was not an Olivier or Brando but freeform comic Jonathan Winters, who also battled to call a truce with the manifold Genie geniuses in his head. In California, Williams joined Happy Days as Mork from Ork and soon had his own high-rated show. Between seasons he did Popeye, and a series of epochal one-man concerts that crowded the stage with figments of his teeming brain.

Why does a clown want to play Hamlet? Maybe because he thinks he is that melancholy soul whom others find amusingly odd. Williams dropped Mork’s na-nu na-nu and entered dramatic film with the lead in The World According to Garp. Eventually he earned three Best Actor Oscar nominations — as the DJ in Good Morning, Vietnam, the sainted teacher in Dead Poets Society and another DJ, nearly driven to suicide, in The Fisher King — plus a win for Supporting Actor as Matt Damon’s therapist in Good Will Hunting.

His serious-sentimental turns could be engaging (What Dreams May Come) or egregious (Patch Adams), but his comedy roles often located the ache in a farceur’s panache: the “straight” gay mate of drag queen Nathan Lane in The Birdcage and, in Mrs. Doubtfire, the exiled husband who becomes a nanny to be near his kids. Above all, Williams infused weird wonder in voice roles for animated features — not only Aladdin but Robots and Happy Feet. He was a cartoon, with all the characters, in a man’s body.

He fell victim to cocaine abuse and alcohol addiction, conquering them and falling back. He could play anyone, but not just one: not “just” Robin Williams. All those voices in the head of this comic Hamlet must have told him it was time to be quiet. The rest is silence. 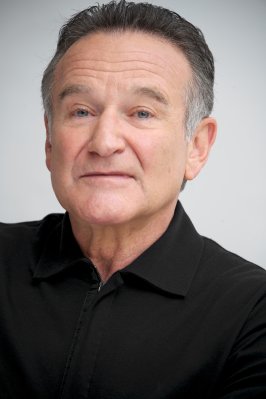 His 5 Most Memorable Roles
Next Up: Editor's Pick