#IfTheyGunnedMeDown and What Hashtag Activism Does Right

The injury, a deadly one, came first. Unarmed 18-year-old Michael Brown was shot to death by police in Ferguson, Mo. Then came the insult: many news accounts used a photo of Brown that showed him, unsmiling, gesturing at the camera in a way that led to unsubstantiated claims that he was “flashing gang signs.”

This portrayal of Brown, who is African American, recalled the quasi-trial-by-photo of Trayvon Martin, another young black man shot to death. It became another racially charged statement in a controversial killing, as outlets illustrated their stories with pictures that–rather than show the dead teen smiling or in a family context–led commenters to call him a “thug” and thus to suggest that he brought his death on himself.

So as people protested in the streets of Ferguson, a meta-protest began on social media. Twitter users, especially African Americans, began a meta-protest, posting pairs of photos with the hashtag #IfTheyGunnedMeDown: a young man in a military dress uniform, say, and the same poster flipping off the camera. If I got shot down, each post asked, which version of me would the media show you? (See more #IfTheyGunnedMeDown tweets here.)

The term “hashtag activism” has become a kind of putdown lately, with the connotation that it’s substituting gestures for action, as if getting something trending is a substitute for actually going out and engaging with the world. And sometimes the criticism is justified: no amount of social-media RT-ing managed to capture guerrilla leader Joseph Kony, for instance.

But #IfTheyGunnedMeDown was a simple, ingenious DIY form of media criticism: direct, powerful, and meaningful on many levels. It made the blunt point that every time a media outlet chooses a picture of someone like Brown, it makes a statement. It created identification: so many ordinary people–students, servicemen and women, community volunteers–could be made to look like a public menace with one photo dropped in a particular context. And it made a particular racial point: that it’s so much easier, given our culture’s racial baggage, for a teenager of color to be made to look like a “thug” than white teen showing off for a camera the exact same way.

It was a brilliant media critique, and while Twitter and other platforms may have no magical power to stop shootings or catch warlords, one thing they are very good at is catching the attention of the media. Journalists pay attention to Twitter–disproportionate attention, maybe–and that makes it a very, very good place to deliver the modern version of a letter to the editor. You could say similar of #YesAllWomen, or of the #BringBackOurGirls hashtag of earlier this year: no, it didn’t have the power to free the Nigerian schoolgirls abducted by Boko Haram, but it did put the story on homepages and newscasts often resistant to overseas news, especially from sub-Saharan Africa.

#IfTheyGunnedMeDown is not going to stop anyone from being gunned down, but it most likely lodged in the memory of editors and producers who make judgments every day. Sure, many of them are already aware of the power of image choices, but #IfTheyGunnedMeDown chose its own images to make a powerful statement–one that people are likely to remember the next time “if” becomes “when.” 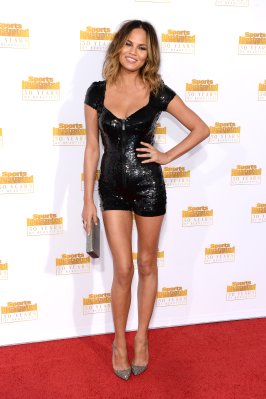 The Best Quotes From Chrissy Teigen's Esquire Interview
Next Up: Editor's Pick